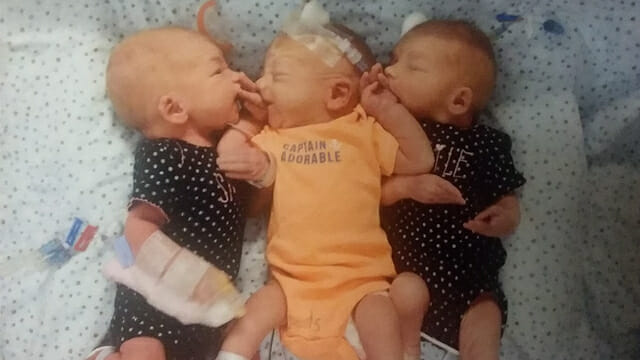 I’m always amazed by the women who have babies having no idea they were pregnant in the first place.

Now a woman from South Dakota has given birth after thinking she was being rushed to hospital for kidney stones.

But this superwoman didn’t just have one baby, not even twins, but triplets, all born within four minutes of each other.

When Dannette Glitz arrived at hospital she was expecting to have her kidney stones removed but instead she was told she was in labor.

“I started getting pains, I figured it was kidney stones because I’ve went through them before,” Dannette told KSFY.

“You don’t ever see triplets being conceived naturally, let alone going 34 weeks without knowing. So, everyone’s like I can’t believe it. We’re still in shock, trust me,” she added.

Each beautiful baby was born weighing about four pounds after Danette had a C-section.

Danette and her husband Austin have been together for 12 years and already have two kids but in a matter of minutes their lives were changed forever.

“I ended up having triplets 1 boy 2 girls …. that’s the story, I never felt movement I never got morning sickness nothing!” Dannette said, according to a fundraiser for the family.

Dannette said they were extremely grateful for all the support they had received from family and friends as they had nothing for their three new babies.
A fundraiser on Facebook has already surpassed the $500 goal and so far almost $1,700 has been raised.

Find out more about this incredible story in the clip below.

I cannot imagine the shock this woman experienced at being told she was having triplets!

Please share so others can enjoy this story and see these adorable miracle babies.