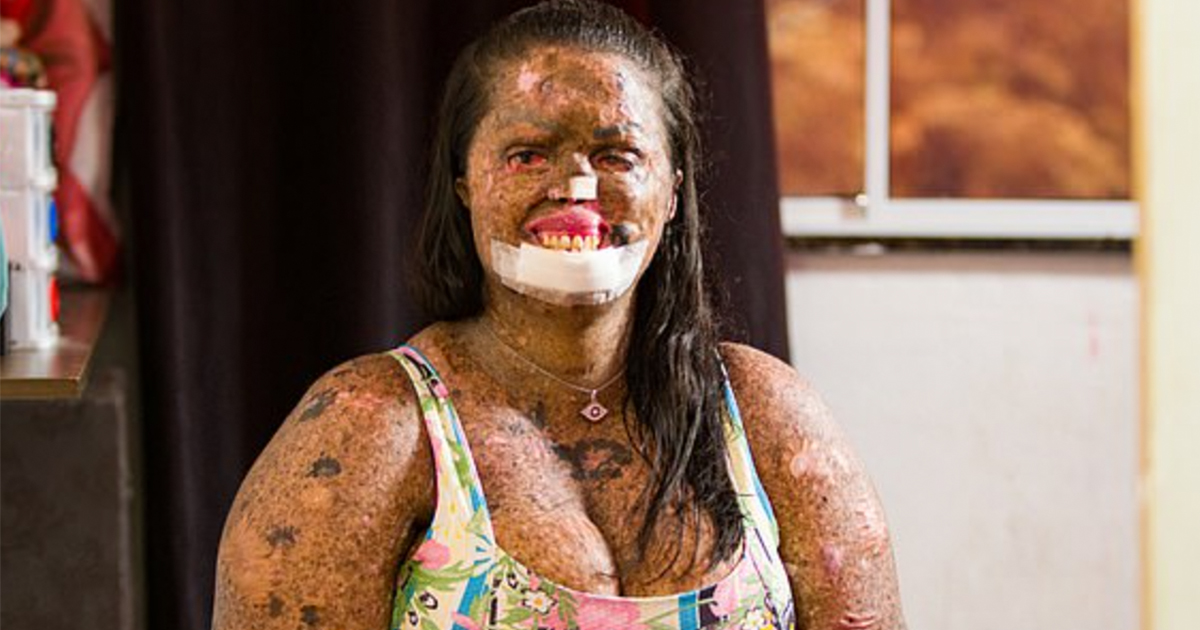 Thanks to the rise of social media, we’re all bombarded with images of seemingly perfect-looking people; it seems as though the world has become even more shallow in how people are judged.

For those of us that don’t fit the stereotypical “perfect” mold the world can seem very cruel with complete strangers feeling it necessary to criticize someone based on their appearance on social media.

Karine de Souza has spent her life covering her skin in SPF100 sunscreens even when she’s inside her home due to her rare skin condition.

The 29-year-old from Brazil was diagnosed with Xeroderma Pigmentosum when she was three years old which means she is at high risk of skin cancer.

Her “one-in-a-million” condition which is incurable means she is highly sensitive to UV rays as she lacks the ability to repair any damage the sun causes to her skin. Just a few minutes in the sun can mean incredibly painful sunburn for her.

Karine has had to endure 130 surgical procedures to remove lesions caused by the sun, including the removal of her lower lip and part of her nose.

She gets stared at in the street and has been the victim of verbal abuse both within her community and online.

But despite her suffering she remains upbeat and happy and has even found love.

She met her husband Edmilson through social media who fell in love with her “story and her strength”. But after posting photos of them together online Karine was exposed to a whole host of offensive comments.

“We have already read many offensive comments calling me a monster, deformed, a zombie,” Karine said, as per the Daily Mail.

Other comments suggested that their relationship wasn’t genuine.

A photographer who captured the couple after they got engaged posted a selection of the images online and wrote: “In a world where appearance matters more than the feeling, they met not by chance, but by a gathering of souls, an encounter of acceptance and character and love emerged when their souls met and today you are the inspiration to so many people who do not believe in themselves, in life and especially in love.

“THANK YOU every day for being who you are. STOP complaining for being like you are. HUG LIFE, and accept yourself. Much gratitude for teaching me so much. You guys are AMAZING. You are the missing hope in so many people. Thank you for the big hug, and for the wonderful day we experienced together. I carry your smile with me forever.”

His heartfelt words and beautiful images he captured of Karine and Edmilson went viral and thousands of people commented congratulating the couple.

Karine wants others to realize the importance of being positive.

“Be happy, smile, because life happens only once,” she said.

Karine has been through so much but thanks to her positive attitude she has found the happiness she deserves.

Her story is inspirational so help us inspire others in similar situations by sharing this story with your friends and family.