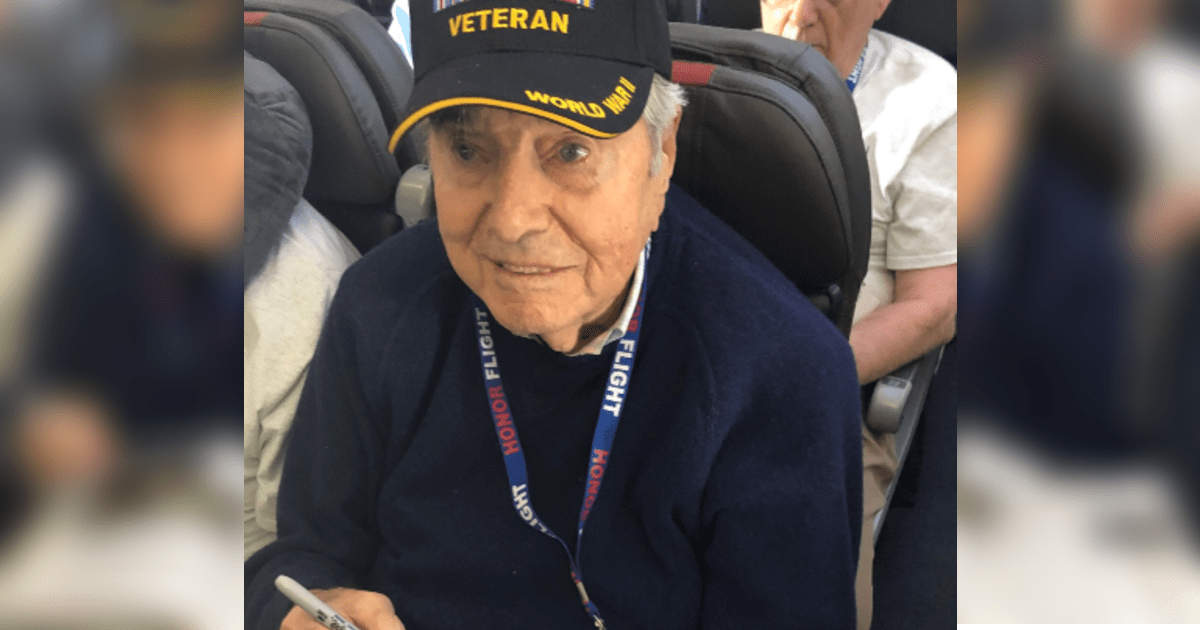 After a whirlwind weekend in the nation’s capital, Frank Manchel, 95, boarded his plane back home to San Diego.

“It was almost instantaneous,” Dave Smith, founder of Honor Flight San Diego, told The San Diego Union-Tribune. “He was laughing, chatting, having a good time — and then he collapsed.”

Frank Manchel, who was an Army technical sergeant during World War II, recently flew from San Diego to Washington D.C. along with 82 veterans and their guardians and volunteers.

The day after the veterans arrived, they visited all of the war memorials as well the Navy Yard’s museum and other historical sites. Before they flew home on the last day of their trip, the veterans toured a military electronics museum.

The weekend went smoothly, until there was an hour left in the group’s flight.

Manchel, who was chatting with his fellow passengers, even signing a World War II book for a guardian, stood up from his seat and collapsed.

His son, Dr. Bruce Manchel who was on the trip, and a doctor onboard rushed to Frank’s side and immediately began CPR. They continued for 12 minutes, but they were unable to revive him.

“If you are up to this,” Shelley Zimmerman, the former San Diego police chief and daughter of a World War II veteran told Bruce, “to honor your father, let’s sing ‘God Bless America.’”

As the plane began its descent passengers sang an emotional “God Bless America.”

When the plane landed, veterans saluted Frank, who was draped in an American flag, as they got off the chartered flight. Zimmerman supervised the removal of the World War II veteran’s body as he was carried past a line of law enforcement officers.

“My father’s passing was the ending to the most amazing weekend, surrounded by his newest best friends,” Dr. Manchel said in a statement. “We thank all of you — Honor Flight San Diego, American Airlines, San Diego International Airport, friends, and supporters for your concern and for allowing the weekend to be so special for all of us to share together.

“Frank passed quickly and peacefully and the compassion and respect that that was shown to our family will always be treasured. May he rest in peace as he is now with his other beloved son Jimmy.”

“It’s called Honor Flight for a reason,” Zimmerman said, “to show the respect and the honor that we have for our veterans.”

Frank Manchel still has one more flight to take – his final resting place in Michigan. American Airlines offered to fly the veteran and his family members free of charge.

Pass this story on to thank Frank for his service and to remember a great American hero.