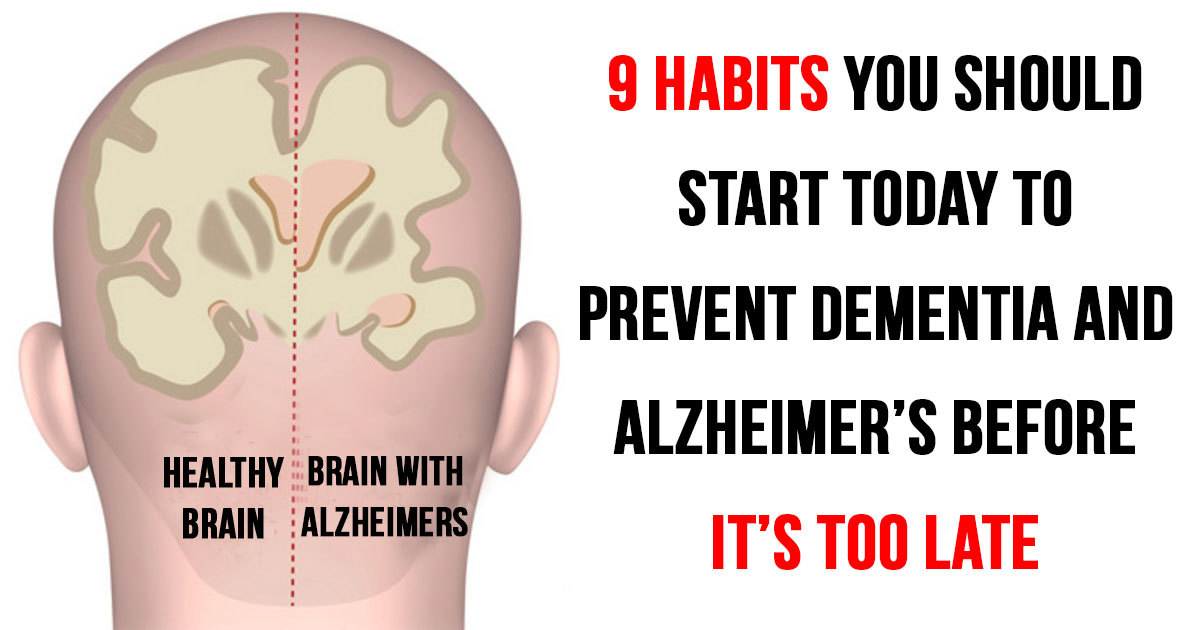 Anyone who has a relative with any type of dementia is completely aware of just how big of an impact it has on the overall mood.

The most common type of dementia is Alzheimer’s, and sadly there is no cure for it.

However – were you aware that exercising three times a week can reduce the chances of dementia by as much as 70 percent?

According to the Alzheimer’s Association, more than 5 million Americans are living with Alzheimers.

Whilst some medicine may help reduce symptoms, a cure is yet to be found.

Here are 9 habits that should be avoided in order to protect your brain from dementia:

Smoking damages many parts of the body, including the brain. Studies have shown that smokers run a 45 percent higher risk of getting Alzheimer’s disease when compared to non-smokers.

Another reason to put that cigarette out!

2. Increase your vitamin B12 intake

Vitamin B can protect against dementia. According to a study done by researchers from a renowned medical instituton in Finland, high levels of vitamin B12 could reduce the risk of Alzheimer’s among the elderly.

Generally, a great deal of older folks suffer from a B12 deficiency as it is, so it’s even more important to consider increasing the intake. Good sources of vitamin B12 are eggs, meat, fish and all seafood.

Try to exercise regularly – not only does it get your heart pumping, it stimulates the blood throughout your body. To avoid any chronic conditions, it’s best to exercise at least half an hour every day.

It is also advisable to keep an eye on your blood pressure by checking it often. If you are middle aged with high cholesterol, you are automatically at a higher risk for dementia, according to one of the researchers from the Finnish institution.

There is a strong link between vitamin D deficiency and Alzheimer’s/dementia.

A major 2014 US study showed that severe vitamin D deficiency increased the risk of Alzheimer’s by approximately 125 percent. “I think vitamin D can be an important part of the puzzle to prevent alzheimer’s,” researcher Miia Kivipelto told the Swedish-based SVT.

Therefore try and be in the sun as much as you can and as for those darker winter months, perhaps consider some vitamin D supplements.

Are you a coffee drinker? Great – because it could very well protect your brain.

Coffee happens to be a strong antioxidant with a great amount of magnesium. This means it can reduce the risk of Alzheimer’s disease by 50 percent. A study from Italy in 2015 claims that exactly a cup a day does the trick – so I guess a cup a day keeps Alzheimer’s away!

There is a connection between hitting your head badly and dementia. A study in the US states that a traumatic brain injury can fourfold the risk of developing Alzheimer’s disease.

Therefore, always make sure you have a helmet when you ride a bike, go horseback riding, ice skate or ski.

Drinking too much alcohol increases the risk of dementia.

Although there are studies that indicate that a glass of wine a day can prevent death caused by Alzheimer’s, a high alcohol consumption is said to have the opposite effect.

The mind should be treated as a muscle; it needs to be kept in shape through ‘exercises’.

Therefore, it is important to try and stimulate the brain through activities such as reading or doing crossword puzzles.

Don’t be afraid to try out new things – that’s because when you try and learn something new, the brain is forced to make an extra effort which in return only enhances its functions.

9. Make sure to relax and rest!

In recent times, researchers have seen an increasingly clear link between stress and dementia. Stress however, is something which is measured very differently from person to person. This makes it difficult to know exactly how it affects the development of Alzheimer’s.

What we do know on the other hand is that sleep is very important for the brain. Lack of sleep can lead to dementia and according to a Swedish study, men with sleeping disorders are at an ever higher risk.

Together we can help spread knowledge and hopefully convince a loved one to change their habits for the better.