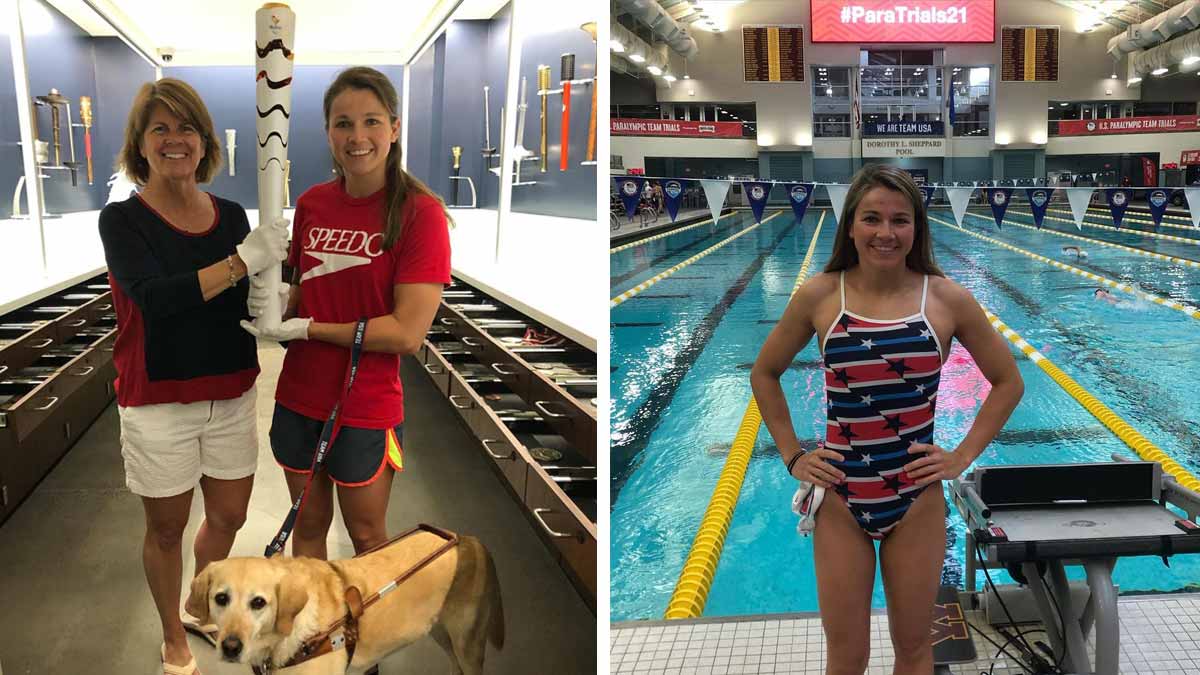 Becca Meyers was a contender to bring home a gold medal for Team USA during the Tokyo Paralympics, but on Tuesday she made the extremely difficult decision to withdraw.

“The USOPC has denied a reasonable & essential accommodation for me, as a deaf-blind athlete, to be able to compete in Tokyo, telling me repeatedly that I do not need a Personal Care Assistant (PCA) ‘who I trust’ because there will be a single PCA on staff that is available to assist me and 33 other Paralympic swimmers, 9 of whom are also visually impaired,” she wrote in a statement.

“I’m angry, I’m disappointed, but most of all, I’m sad to not be representing my country.”

Meyers, 26, was born with Usher syndrome, a rare genetic disorder that left her deaf from birth and gradually robbed her of her sight. She uses her seeing eye dog, Birdie, and a personal care assistant, her mother, to function in society.

In an unfamiliar territory without any assistance, she becomes lost and riddled with anxiety.

During the 2016 Paralympic Games in Rio, she was “crippled with fear and anxiety before competition even began.”

“I was overwhelmed navigating the athletes’ village, finding the bus terminal, making my way to the venues where I needed to compete. I had such issues in and around the dining hall, where I wasn’t able to find the right food to eat, that I started skimping on meals,” Meyers wrote in a piece for USA Today.

She reached out for help, but learned the help she needed wouldn’t be on campus until the day before competition started. Eventually the head coach of U.S. Paralympics Swimming noticed and suggested Meyers stay at a nearby hotel with her parents.

“In that moment, I promised myself that I would never be put in that situation again.”

In 2017, the USOPC approved the use of a personal care assistant (PCA) whom Meyers knew and trusted in order to help her at international swim meets.

And she hasn’t had an issue since. In fact, she went on to win several medals at meets around the world.

However, with all the restrictions in place for the 2020 Tokyo Olympics and Paralympics, Meyers’ mother Maria who serves as her PCA, was not permitted to travel to Tokyo for the Paralympics.

“She’s given her entire life for this. It’s unacceptable. It’s heartbreaking,” Maria told The Washington Post. “She is terrified to go [alone]. And I mean terrified — like, rolled up in a ball, shaking.”

Becca said the USOPC told athletes that there would be a single PCA available for them all to use, however Becca said that’s not good enough.

The PCA is responsible for being on call for over two dozen athletes, including nearly 10 other visually impaired athletes on the swim team.

“How could I possibly set foot in a foreign city, with the numerous restrictions and barriers that COVID-19 has put up, and expect to feel safe for two weeks? How can any of us?”

And she said that’s what led to the “agonizing” decision to drop out.

Becca’s father told The Washington Post that after contacting many government officials in both the United States and Japan, they believe it’s the USOPC that messed up.

“They can ask for more [official credentials]. … They just did not plan for her. They knew about this [issue] in February. They said, ‘Sorry, we can’t help you.’ They’ve had time to fix this, if they asked the right people. They’ve chosen not to.”

In a statement, the USOPC said,

We are dealing with unprecedented restrictions around what is possible on the ground in Tokyo. As it’s been widely reported, [the Tokyo Organizing Committee of the Olympic and Paralympic Games], at the direction of the government of Japan, is not permitting any personnel other than operational essential staff with roles related to the overall execution of the games, into the country.

But for athletes like Becca, a PCA is essential and related to her performance.

“I have trained for five years to get back to this point. I know my chances to swim for my country are coming to an end. But enough is enough. I need to speak up for the next athlete who is deaf-blind or disabled in another way.”

This is absolutely outrageous. It is heartbreaking that Becca Meyers had to withdraw because she wasn’t allowed to bring a PCA with her to Tokyo.