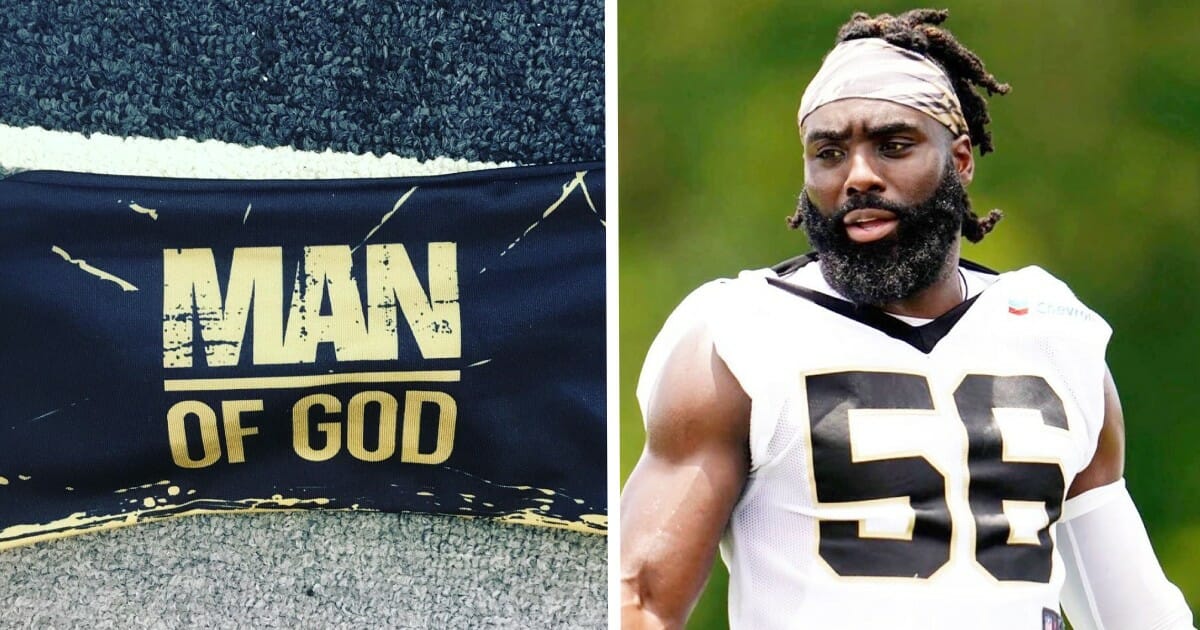 On September 22, Demario Davis was fined for wearing a headband that said “Man of God” during a game against the Seattle Seahawks. The NFL fined the New Orleans Saints linebacker more than $7,000 because he was in violation of the league’s dress code policy.

“I was not expecting the fine because I had worn the headband before, but once I realized that it was against the rules, I was in a conflicting position,” Demario told FOX Business.

Even though he wore the headband for the first several weeks of the season, he decided he wouldn’t wear it after receiving the $7,017 fine from the NFL.

Instead, he began selling “Man of God,” “Woman of God,” and “Child of God” headbands to supportive fans with 100 percent of the proceeds going to St. Dominic Hospital, a hospital near his hometown in need of a new emergency department.

I accept the fine but the mission continues! Obstacles are made to be conquered and I'm here to serve!!! We all can. Me, my family, and my headband are partnering with @stdomhospital so that 100% of proceeds can help save lives. You in?! #ManOfGod You can get your headband and help me support St. Dominic’s by going to: bit.ly/56manofgod (link in bio)

According to The Times-Picayune | New Orleans Advocate, Demario appealed the NFL’s fine because he was unaware a headband was considered a uniform violation and he didn’t believe it was offensive.

He also wanted the NFL to take another look at the rule and reconsider it.

So, I got fined $7K for my headband. Should I continue to wear it, or nah? #LetThePeopleDecide #ManOfThePeople #ManOfGod ((You can get a #ManOfGod or #WomanOfGod headband too. Hit the link in my bio to get yours and benefit St. Dominic’s Hospital))

On Tuesday, he received the news that his appeal had been approved. The NFL wouldn’t fine him.

“It’s a huge win,” he said, later adding, “I’ve been able to turn it into a positive.” pic.twitter.com/ga2Q2pDSDN

The linebacker announced the news on his Instagram alongside a photo of students and faculty who wore handmade headbands that matched Demario’s Man of God headband.

The students, who are from St. Louis King of France in Metairie, Louisiana, made their own Child of God headbands in support of Demario.

WOWWW look at this!! So my agent just told me that I won my appeal and won't have to pay the headband fine!! Then I see that St. Louis King France came together today to support the movement! Won’t he do it! Look at all these beautiful children of God! Always glory above so I’m taking every penny of that original $7,017 fine and donating it to @stdomhospital anyways. So far, we’ve raised over $30,000 for them from the headbands!! That means yall helped me turn a $7,000 negative into an almost $40,000 positive benefiting people who truly need it!!! Do y’all see how that worked?? Let’s gooooo. That’s crazy! Ya’ll are a part of this journey too!! I can’t thank ya’ll enough either. We on a mission over here obstacles are meant to be conquered!! I’m truly blessed as anybody. We’re restocked on the site with more #ManOfGod and #WomanOfGod color options and have added #ChildOfGod. If you haven’t purchased yours yet or didn't get the color you wanted, donations will continue to go to @stdomhospital so now is the time to stock up! Thank you, thank you, thank you!! #ManOfGod #WomanOfGod #ChildOfGod #WhoDat #TheSaintsAreTheBestTeam Get your headband at: bit.ly/56manofgod (link in bio)

In addition to the news of his win, Demario shared that fans raised over $30,000 for the hospital, and the money that he would have had to pay for violating the NFL’s dress code would also go to the hospital.

Aimed for the stars and I shouldn’t have missed, but I was riding on fumes so I stopped by the moon. -Cole

Way to turn a negative into a positive!