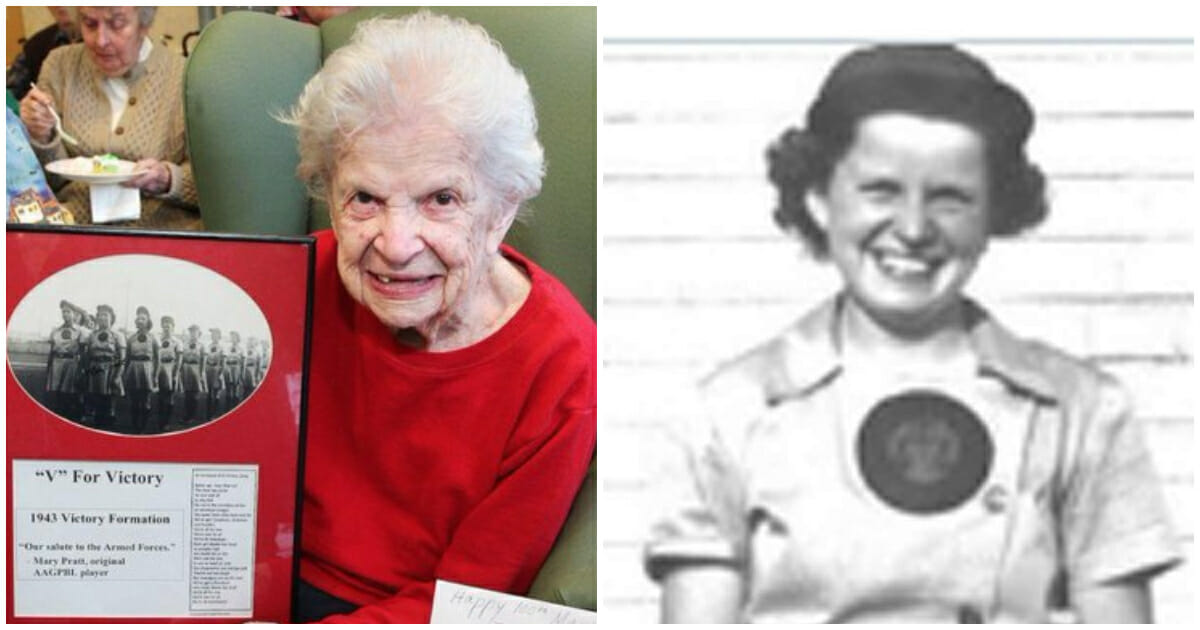 Many sports movie fans love the 1992 film A League of Their Own, the classic inspirational story of the women’s baseball teams that took the field during World War II while the men were away.

And it was a true story: All-American Girls Professional Baseball League swept the sports world in the ’40s, and the team featured in the film, the Rockford Peaches, were its most successful team.

These female sports heroes have kept their story alive for decades, but now sadly the last surviving member of the original team has passed away: the league announced that pitcher Mary Pratt died on May 6. She was 101.

She reportedly passed away at the at John Scott nursing facility in Braintree, Massachusetts.

“Her stories, her energy will be missed for a long time,” the AAGPBL wrote.

“Mary was a wonderful and a very unique person,” friend Rose Somensini told the Patriot Ledger. “We won’t see her kind again… It was just wonderful knowing her.”

Mary grew up in Quincy, Massachusetts, where she spent most of her life. She always had a strong interest in sports, even growing up in a time when girls weren’t often allowed to play.

“It was against the social dictates for women to play sports when I was growing up,” she told the Boston Globe. “If you did you were tomboyish or mannish. It wasn’t the proper thing to do.”

“Men always accepted me and boys on the playground let me play, but I know now if there had been an option to compete with girls, I would have done it.”

After graduating Boston University, she went into teaching, and in 1943 she finally got her chance to play with her fellow women after joining the AAGPBL.

She joined the league in its inagural season as a member of the Rockford Peaches, who became the league’s most famous and successful team.

But Mary had her best season after transfering to the Kenosha Comets, where she pitched a no-hitter in 1944, a huge achievement for any pitcher.

Mary retired from baseball, and as the public lost interest in women’s baseball after the war, the league was disbanded, but Mary and her fellow players kept the story alive through their stories.

And Mary continued to advocate for equality in sports for the rest of her life.

“[She] was a walking, talking example of how Title IX came about,” Richard Johnson, curator of The Sports Museum in Boston, told the Boston Globe.

“It wasn’t just Billie Jean King out there pushing the envelope, it was Mary Pratt doing so years before.”

Today the Rockford Peaches are immortalized in the 1992 movie A League of Their Own, directed by Penny Marshall and starring Geena Davis, Madonna and Tom Hanks.

The film brought the story of the AAGPBL back to the public consciousness and coined the phrase “there’s no crying in baseball.”

Rest in peace, Mary Pratt! Thanks for being such a trailblazer for women in sports.

Celebrate this incredible woman’s legacy by sharing this story!