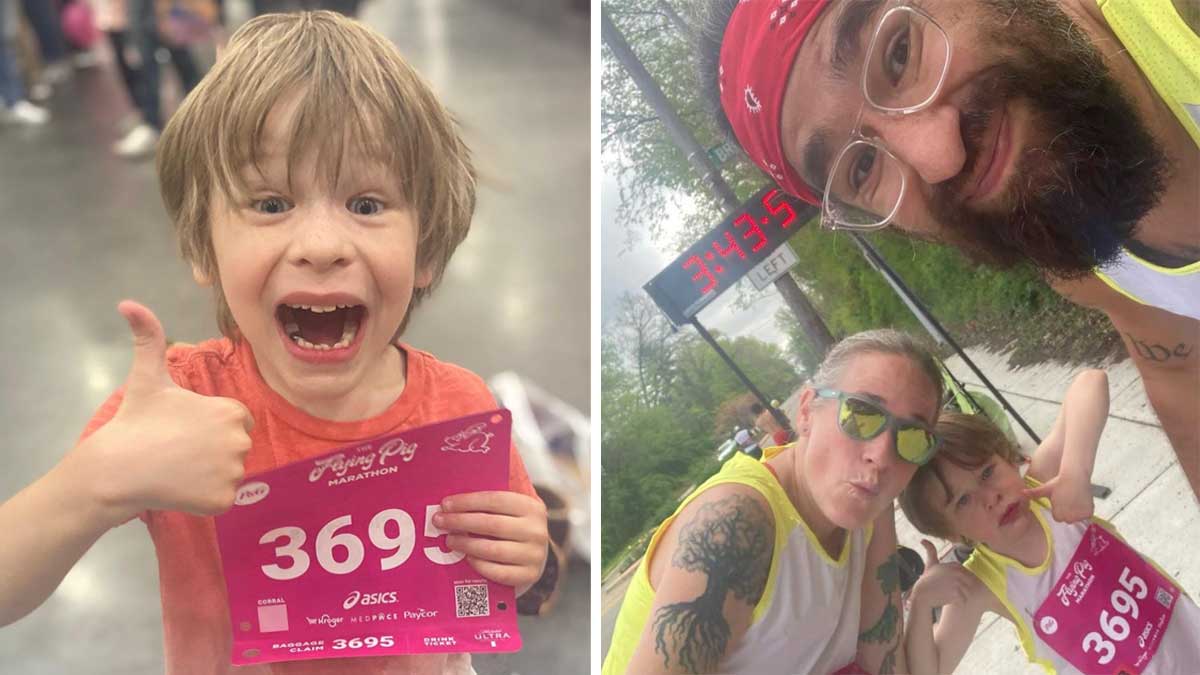 Running a marathon is no walk in the park. Those who are up to the 26.2 mile challenge will often spend weeks training to get their body in shape so when race day comes they’re able to complete the course.

Recently, a family of eight competed in the Flying Pig Marathon in Cincinnati, and while their large family may have caught some people’s attention, it was their youngest family member who really caught people’s eye.

The Crawford family of Bellevue, Kentucky, have attracted some criticism following their youngest son’s accomplishment.

After Ben Crawford shared that his six-year-old son Rainier competed in and completed the Flying Pig Marathon, the family began fielding harsh criticism.

Not that it helped anyone’s concerns, but Rainier did train with his family prior to the run.

“Some of the training was like, hard, but I falled sometimes but sometimes, when I did one, it was like, normal,” Rainier told Good Morning America.

Remarkably, Ben was honest about Rainier’s struggles during the race. He noted that his son became particularly upset around mile 20.

“He was struggling physically and wanted to take a break and sit every three minutes,” he wrote in an Instagram post. “After 7 hours, we finally got to mile 20 and only to find an abandoned table and empty boxes. He was crying and we were moving slow so I told him I’d buy him two sleeves [of potato chips] if he kept moving.”

During the race someone was always running alongside Rainier.

Ben commented that while they kept pace at the back of the corral, the rest of the family waited over an hour at mile 25 so they could all finish together.

“I didn’t know if he was going to be able to do it so to be able to run alongside of him and to watch his little body, it’s pretty mind-blowing,” Ben said after they crossed the finish line 8 hours and 35 minutes after they started.

After sharing photos from the race online, many commented on Rainier’s well-being.

Kara Goucher, a two-time Olympian and long-distance runner, shared her opinion on the situation.

Dr. Alok Patel told Good Morning America there are many concerns about a young child running a marathon.

“If a young child were to run a marathon, I’m worried about electrolyte abnormalities, nausea, vomiting, heatstroke, all these signs and symptoms that may not be that clear in a young child,” Patel said.

Ben responded by saying all of the family’s children have run marathons before, and that after Rainier begged to train and attempt to run with his family, Ben and Kami allowed it.

“We asked him numerous times if he wanted to stop and he was VERY clear that his preference was to continue. We did not see any sign of heat exhaustion or dehydration and honored his request to keep on going,” he wrote.

The father of six also cleared up any question about the amount of tears shed during the marathon.

“Yes there were tears. He had a fall and every single member of our family has cried during marathons,” he wrote. “These experiences were very limited compared to what has been reported and despite the incredible physical and emotional difficulty of running a marathon the amount of his crying is comparable to what we would have experienced had we stayed home on a Sunday morning.”

Days after the marathon, the race director responded taking full responsibility for allowing Rainier to participate.

“This decision was not made lightly because the father was determined to do the race with his young child regardless,” Iris Simpson Bush said. “They had done it as bandits in prior years before we had any knowledge and we knew he was likely to do so again.”

“We really care about our kids’ emotional and physical health. But we also care about their agency and if they want to do something, and we, you know, assess the risks and figure out if it’s OK,” Kami said.

This is not the first time the Crawfords have taken their family on a big adventure. The family of eight previously hiked the entire Appalachian Trail.

What do you think about their decision to let Rainier run a marathon?