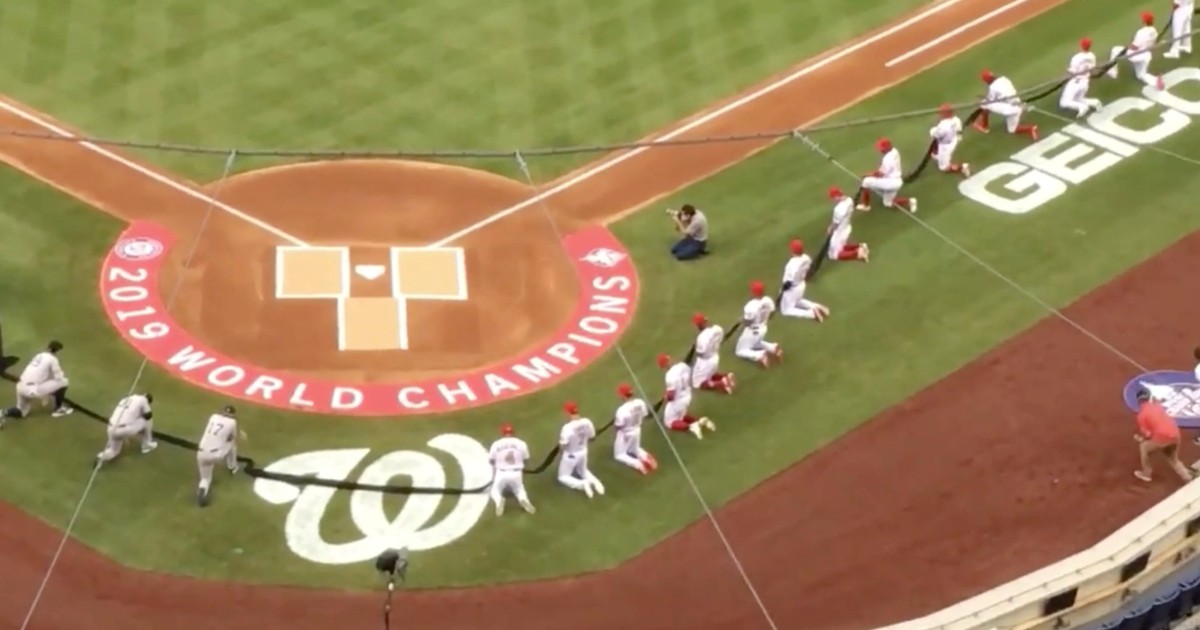 After a months-long delay, baseball is finally back, albeit a bit different. The most obvious being no fans in the stands.

But during those four months that fans patiently awaited the return of America’s favorite pastime, a massive social movement took place. And many wondered, would MLB players acknowledge it?

Before the Washington Nationals, the reigning World Series Champions, officially opened their season against New York Yankees, a Players’ Alliance Black Lives Matter video reportedly played, and then both teams silently grabbed a black cloth that stretched from first base to third base.

Before the playing of the national anthem, every player and coach from both teams took a knee for approximately 20 seconds.

The teams’ decision to kneel, which was also replicated later that evening by the San Francisco Giants and Los Angeles Dodgers, had been discussed multiple times leading up to Opening Day.

“I thought it was a great way of demonstrating while being mindful of other peoples’ beliefs. The unity part for our team was important,” Yankees manager Aaron Boone said.

While everyone stood for the national anthem during the Nationals and Yankees game, there were several players who knelt during the Giants and Dodgers game.

“It was emotional. I thought it was powerful,” Nationals closer Sean Doolittle said. “It was important for us and for the Yankees that everybody bought in. Holding the ribbon and kneeling.”

“To show support for the movement about Black Lives Matter and ending police brutality and racism and injustice.”

In addition to kneeling before the anthem, players from the Nationals and Yankees wore Black Lives Matter shirts during batting practice, and “BLM” was stenciled into the back of the mound.

“We know there are issues in this country and we need changes. We need changes for the better. These guys all understand that,” Nationals manager Dave Martinez said. “This was for a major cause, we believe in it, and we did what we could.”

Do you agree with how these teams are showing their support? Let us know on Facebook.