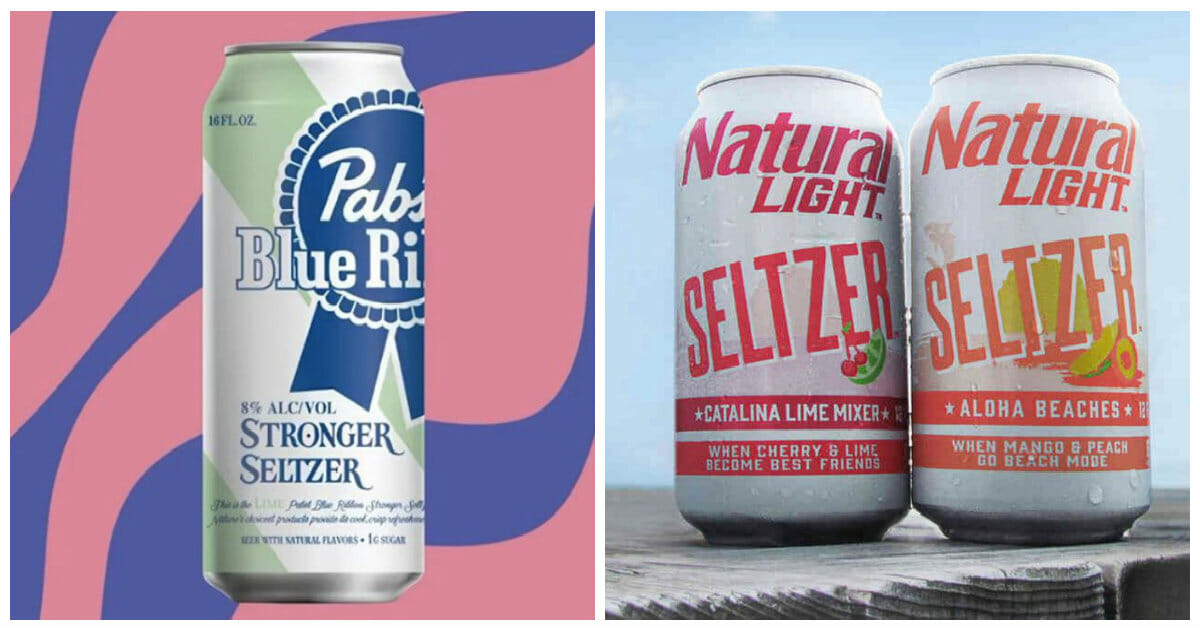 I know this can be hard to believe BUT: there are some people in the world who don’t like to drink beer. Shocking, indeed.

Whether it’s because of the taste or the calories, there are just some drinkers who aren’t fans of a good ol’ fashioned cold one. But don’t they still deserve a refreshing drink of their own to get buzzed on a hot summer day?

Beer alternatives have been popping up more and more, but the biggest trend blowing up this summer has been hard seltzer. It’s impossible to go to a pool party without seeing some White Claw (or Instagram without seeing memes about White Claw).

A hint of all natural flavors goes a long way. Swipe right to see our new 6-pack flavors of White Claw.

But if you can’t beat ’em, join ’em. If millennials want hard seltzer, the beer industry wants in on the action… and now two classic beer brands are releasing hard seltzers of their own, each offering an enticing alternative to White Claw Summer.

One of these hard seltzer drinks comes from Pabst Blue Ribbon, who recently announced their new “Stronger Seltzer” product. It lives up to its name: it has an 8% ABV, higher than any of the popular spiked seltzers on the market (White Claw’s is 5%.)

While it has higher alcohol content, it’ll still be a low-calorie alternative to beers and sugary hard drinks.

Strong struts. Stronger Seltzer. Our limited release will include Texas, Arizona, California and Montana. Don’t live in those states? Tag a friend you know who does. It’s a good way to let them know you’ll be coming into town. And that you’re making a date to grab some of our 8% ABV Stronger Seltzer. ?

It’s not too surprising that PBR is making their own hard seltzer. The brand has been more willing to step out of their comfort zone, introducing new products from whiskey to boozy coffee.

“Stronger Seltzer explores new ground for the blue ribbon, while upholding the boundary pushing tradition that’s been associated with us since the days of our founder Jacob Best,” John Newhouse, brand manager at Pabst Blue Ribbon, said in a press release. “Stronger Seltzer is a fun and innovative new drink that delivers big on taste, and gives our customers something different to enjoy.”

Also worth noting: PBR is stereotypically a hipster beer while hard seltzer is associated with frat bro types. Could this be the drink that finally unites these two groups in harmony, perhaps even achieving world peace?

Permanently 8% ABV. Much like that tattoo. We’re launching our Stronger Seltzer with 8% ABV in limited markets on Monday, 8/12. Thoughts, feelings, and excitement are welcomed and encouraged here.

But PBR isn’t the only one getting in on the action… so is Natural Light.

That's right, we made a f***ing seltzer.

One selling point: Natural Light Seltzer is about 20% cheaper than its competitors. You can also buy it in bulk: packs come with up to 24 cans.

“Where fun is needed, Natural Light goes, and crashing the seltzer party is our next destination,” their press release says. “This is the seltzer you never saw coming!”

Which isn’t totally accurate: Natty Light is a total frat beer, so it makes logical sense that they’d try to tap into the White Claw crowd.

“The seltzer category is booming. It’s part of a larger shift in consumption across America and we believe it has tremendous staying power,” said Ricardo Marques, Vice President of Core and Value Brands at Anheuser-Busch.

“We know plenty of Natty Light drinkers are also trying seltzer, so we want to meet that demand by bringing the fun of Natty into that space with an affordable price offering that fits their lifestyle.”

Sometimes, you gotta give the people what they want. While no one’s taking beer off the shelves (yet) it’s nice to have some alternatives once in a while. No word on if any beer company is planning to make their own aperol spritz.

Will you try these new hard seltzers? Let us know! Share this story!