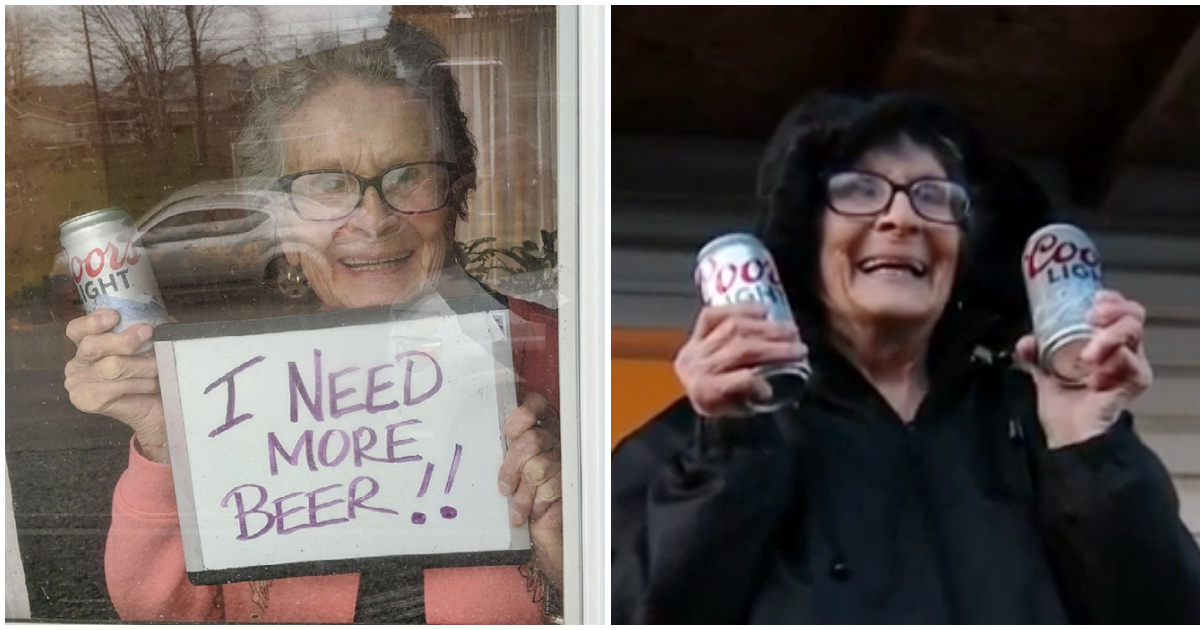 The COVID-19 pandemic has dominated all of our lives for over a year now, and while we’re finally approaching the light at the end of the tunnel, no one can forget what it was like in the early days of the crisis.

People were scared, confused, confined to their homes and separated from loved ones. But amidst the chaos, one brave hero stepped up and said what we were all thinking: I need a beer right now.

That woman was 93-year-old Olive Veronesi from Seminole, Pennsylvania, who became a viral sensation after the homebound senior held up a sign saying “I need more beer!!”

Sadly, Olive died this week, just after celebrating her 94th birthday. But she’ll always be remembered as a true beer legend.

It was last April, near the height of the coronavirus pandemic, and the senior lady was being responsible by staying indoors in her home.

But at a time when everyone else was fighting over toilet paper, Olive had a much more grave concern: she was running low on her beloved beer.

“I was on my last 12 cans,” Olive told KDKA. “I have a beer every night, you know what, beer has vitamins in it, it’s good for you, as long as you don’t overdo it.”

The photo went viral, with people around the country saying “get this woman a beer.” It also reached representatives of Molson Coors, who make Olive’s favorite daily beer, Coors Light.

Not willing to let their biggest fan run dry, two representatives from the company loaded up a supply of cold ones and delivered it right to Olive’s door.

“My associate and I put in 10 cases of beer, and drove up, and made sure Olive got her beer so she can continue her healthy regimen of a Coors light a day,” Mark Linder of Molson Coors told KDKA.

Olive ended up with 15 cases of Coors Light, and didn’t hesitate to crack open a cold one.

“I think it’s nice, something for a young lady,” Olive said.

She held up another sign, saying “Got more beer!”

According to KDKA, Olive died on May 4. But her family says she kept enjoying her beers til the very end, celebrating with some Coors on her 94th birthday on Friday.

Rest in peace, Olive. You’ll be remembered for putting a smile on our faces during a very difficult time.

Tonight crack open a can of beer and cheers in memory of Olive. Share this story to pay tribute to this legend.