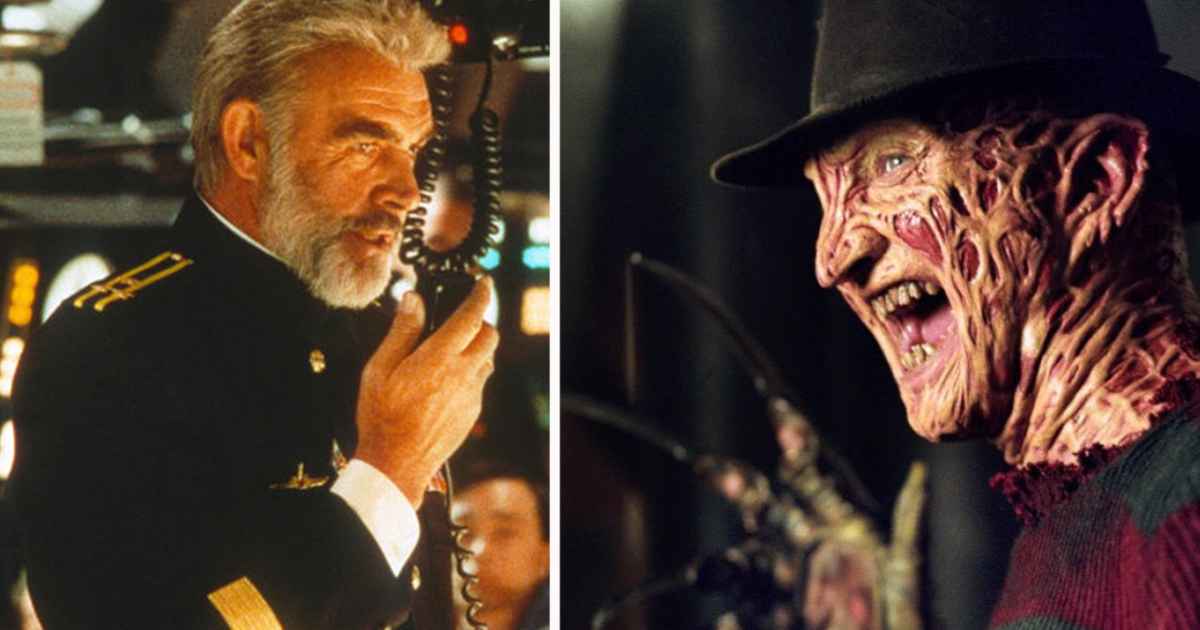 There are films you see and expect to be based on reality. Historical dramas, biopics, crime movies, and obviously, documentaries. But, there are often comedies, horrors, and action films surprisingly based on real events – which you might not even know about.

Here are 11 films that you have probably seen, but didn’t know were inspired by reality.

Most of us have seen Sylvester Stallone’s classic about the underdog boxer who gets his chance to fight a heavyweight champion. But, the script for Rocky doesn’t have the bright and cheerful history as one might think.

Early on, Sylvester admitted that his inspiration for the script came after watching a boxing match that lasted 15 rounds between former heavyweight champion Muhammed Ali and Check Wepner – a low-ranked boxer who was forced to work as a nightclub guard to afford the training.

Since Rocky’s opponent in the film, Apollo Creed, was also clearly based on Muhammed Ali, the real Wepner eventually sued Stallone for stealing his life story in 2006. The lawsuit was settled in negotiations between parties and Wepner was awarded an unknown amount of money.

In addition, Stallone’s team had consulted Muhammed Ali’s greatest opponent, Joe Frazier, about training for the movie. The famous scenes where Rocky hits slabs of hanging meat and runs up the stairs of the Philadelphia Art Museum are directly taken from Frazer’s own life. But, he received no recognition for it – a fact which the boxer is still said to be bitter about.

Steven Spielberg’s adventure film, Indiana Jones, is (if you’re going to be picky) based on a movie from 1954 called Secret of the Incas. But, both the film Indiana Jones and the main characters are in turn, based on a real adventurer.

Hiram Bingham was 36-years-old when he realized that it was not enough to just teach history and politics at Harvard, and later, Yale. He wanted to explore the world. So, he set off on an expedition to find the lost Inca capital – mostly to satisfy his own curiosity.

Guided by scriptures which were hundreds of years old, local guides joined him in his search for the Macchu Picchu ruins, an elaborate hilltop city which had been forgotten for generations.

The discovery was a major breakthrough and Bingham’s book about the experiences became a best seller. Six years later, Charlton Heston played a tougher version of the hero and a few decades later, it was Harrison Ford’s turn.

The 1974 film, The Longest Yard, is a true sports classic with Burt Reynolds in the lead role. The story revolves around a group of prisoners who play a football match against their captors.

Since the film’s original release, there have been several remakes. Mean Machine, with the British tough guy and former footballer, Vinnie Jones, and The Longest Yard 2005 fronted by Adam Sandler.

But, despite claims that the film is based on an original story, reviewers in 1974 found many similarities between The Longest Yard and a 1962 Hungarian film called Two Halves of Hell. The film is, in turn, based on actual events in which German soldiers played football against Ukrainian prisoners of war during World War II in a duel called The Death Match.

No, there is nothing to indicate that a murderer returning from the dead to kill teenagers in their dreams is based on a true story. But, the inspiration for the film’s villain, Freddy Krueger, is truer than you might think.

Wes Craven, the man behind the film, has stated in interviews that the idea was born when he read that several Cambodian immigrants died under mysterious circumstances.

A family who had moved to Los Angeles was doing fine and dandy until one day the son suddenly began to refuse to sleep. He was convinced that if he fell asleep, an unknown terror would be his death. After her son had managed to stay awake for several days, he finally fell asleep out of exhaustion. A few hours later, the family heard him screaming in terror and he was found dead in his room.

Craven read about the event, let his imagination fill in the blanks, and soon Nightmare on Elm Street was born.

Coen Brothers’ cult masterpiece, The Big Lebowski, is in and of itself not generally based on real events. But, unlike other Coen films, such as Fargo which is claimed to be based on a true story without true events to back it up, there are real elements in The Big Lebowski.

Specifically, the main character, The Dude, played by Jeff Bridges, is based on a real-life friend of the Coen brothers. His name is Jeff The Dude Dowd, and he was a film distributor who had worked with the brothers on a previous project. Just like the film’s character, the real Jeff Dowd was very fond of White Russian cocktails, was called quite simply The Dude, and had a “rug that really tied the room together”.

If you’ve seen Zack Snyder’s epic about Sparta and its army, you probably noticed it had some roots in history. But, the film is more faithful that you might have thought. The story behind 300 comes from the comic book of the same name by Frank Miller, and is based on a true battle between the Persians and the Greek around 480 BC.

Just like in the film, Spartans were known widely as feared warriors and engaged in a morbid kind of selective order where only the strongest children got to survive – all in order to become soldiers.

The story of Brad Pitt’s tank group from 2014 is not based on just one teal WWII tank crew, but actually several. Director, David Ayer, used several true stories to portray the events in the film as realistically as possible.

Among other details, a real soldier, remembered as the ‘most decorated soldier of WWII, Audie Murphy, really did place a machine gun on a burned-out tank to hold back an ongoing German assault by himself. In addition, Brad Pitt’s character was named after a real American tank commander called Lafayette “War Daddy” Pool.

The film’s climax is based on a different story. U.S. troops said they found lone survivor recruits in a bombed tank in the middle of a country road-crossing surrounded by dozens of dead enemy soldiers.

Most film fans know that Michael Mann’s film, Heat, is based on a real bank robbery that turned into a shootout. The robbers overpowered Los Angeles police with automatic weapons and body armor – and it’s not just the action scenes that are based on real events.

The director has a friend named Chuck Adamson who was a former police officer in Chicago. The story of police having a rivalry with a professional thief is based on the true events of Adamson’s life. Apparently, he even had a meeting with the thief, named McCauley, just as De Niro’s character in the film does – over a cup of coffee while he was on his trail.

In the end, the real McCauley fled from the crime scene as he was chased by Adamson who has no choice but to shoot him – just like it happens in the film.

9. The Hunt for Red October

Tom Clancy’s marine turned CIA analyst, Jack Ryan, has been through a lot of crazy adventures. But, some of them are based on more than just Clancy’s vivid imagination.

The Hunt for Red October sees a Soviet submarine captain abandon orders and head for the US, while being chased by his own government. Sounds too good to be true right?

Think again. Clancy based the story on Captain Valery Sablin who, along with a loyal crew, stole a ship called The Sentry. The Soviet armed forced caught up with the ship and sank it before it got that far. The Russians told the media that the crew had been heading to the US to desert

However, only after the book, The Hunt for Red October, (from which the film was based on) was released was it revealed that Sablin and his crew did not intend to desert to the United States, but rather planned to attack the Soviet leadership to implement a new and even more communist revolution.

Perhaps not everyone has seen seen this cult classic comedy, in which Jack Black plays a priest who begins a career in Mexican wrestling to raise money for a local orphanage.

The premise is taken from the life of Sergio Gutierrez Benitez. He was a priest in Texcoco, Mexico. When he realized how much money was needed to take care of nearly 200 orphaned children in his church, he decided to do something odd. Inspired by old movies he’d seen where the fiction priests started wrestling to raise money, Benitez decided to do it for real.

Going by the name Fray Tormenta, of Father Storm, he went into the arena. For years he kept his double life a secret, but when a rival wrester revealed that he was actually a priest, donations suddenly flooded in from all across the country – making Benitez regret his decision not to be honest from the start.

Who hasn’t had a sleepless night after watching The Exorcist? If someone told me that it was based on a real terror, I probably wouldn’t have slept for weeks.

The film, with Max von Sydow, among others, is based on a book of the same name written by William Peter Blatty. Blatty took inspiration from the real 1949 exorcism of a 14-year-old boy in Maryland. The boy, known as Roland Doe, is said to have spoken in tongues and was hurt by holy things.

Catholic priests were called to the scene and several of them said to have sustained injuries during the actual ritual. But their efforts were a success, reportedly, and afterwards he managed to live a perfectly normal life.

Surprised by some of these facts? Share and spread the knowlege with your friends.