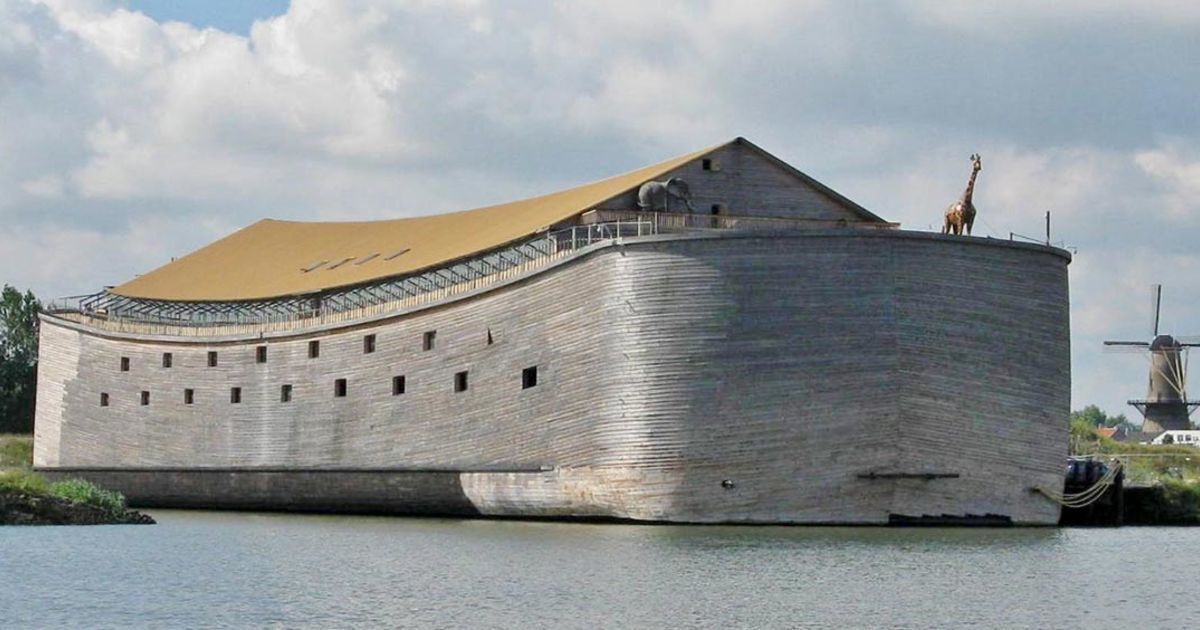 Whether or not you’re Christian, you have to admire Johan Huiber’s dedication.

The Dutch contractor grew up in the province of Noord-Holland, which is surrounded by water on three sides — and his fascination with the ocean goes back to childhood.

At the age of 24, Johan turned to God and nine years later, he dreamed that a horrible flood swept across the Netherlands and wiped out the entire country.

Johan, who is a carpenter by trade, saw it as a sign that he should build a boat, with Noah’s ark as a model.

The origin of Johan’s enormous ark dates back to 1992. That’s when the carpenter started researching Noah’s ark so he could one day build his own. He read the Bible, poured over reference books, and watched movies—all so he could make an authentic copy of Noah’s ark.

But that wasn’t the only ark he built…

“The Ark of Noah replica was built by Johan Huibers from 2008 – 2013. The Ark is in the Netherlands and has attracted hundreds of thousands of visitors,” according to the ArkofNoah.org website.

“The vessel itself is an immense life-sized exhibit with multiple floors. Visitors will experience Bible-based stories and exhibitions, attractions, a movie theater and more. The Ark of Noah Foundation will bring the Ark of Noah to Brazil with the help of worldwide supporters,” it stated.

The ark is currently docked in Dordrecht, The Netherlands. It cost more than 4 million euro to build and sits on a steel platform made of 21 barges.

The ark can be pulled along inland waterways by tugboats, but needs to be transported on top of a pontoon or transport ship to cross oceans.

The special boat has attracted more than 280,000 visitors over the past four years.

And when you look inside, it’s easy to understand why… Visitors will experience Bible-based stories and exhibitions, attractions, a movie theater and more.

But while the Bible indicates that Noah built his ark with Gopher wood, Johan Huibert built his with American pine and cedar trees.

Sailing the vessel 5,000 miles across the Atlantic would cost nearly $2 million, according to the Daily Mail.

Johan’s ark contains a variety of statues of animals, including cows, penguins, a crocodile and a giraffe.

The ark also contains two cinemas and a restaurant.

Johan’s ark has been open to the public since 2012.

Earlier, Huibers said he had plans to sail the ark to Brazil, but they did not materialize.

According to Bored Panda:

“At the moment Huibers is seeking donations from good Samaritans to help reach his goal of taking the vessel to Israel. As the ship has no motor, Huibers will need to rent tugboats in order to sail it, requiring approximately $1.3 million to complete the voyage.”

Now, he wants to take the ship to Israel, declaring his love for the Jewish state in an interview with the Jewish Telegraphic Agency, adding that “this is a copy of God’s ship. It only makes sense to take it to God’s land.

“I love the county, I love the people. They don’t obey, they do what they want, they drive like mad, shove while waiting in line and don’t listen to anyone. Just like me.”

Wouldn’t it be amazing to step on board a real ark?

Johan deserves a ton of respect for his masterful creation. Share if you agree!