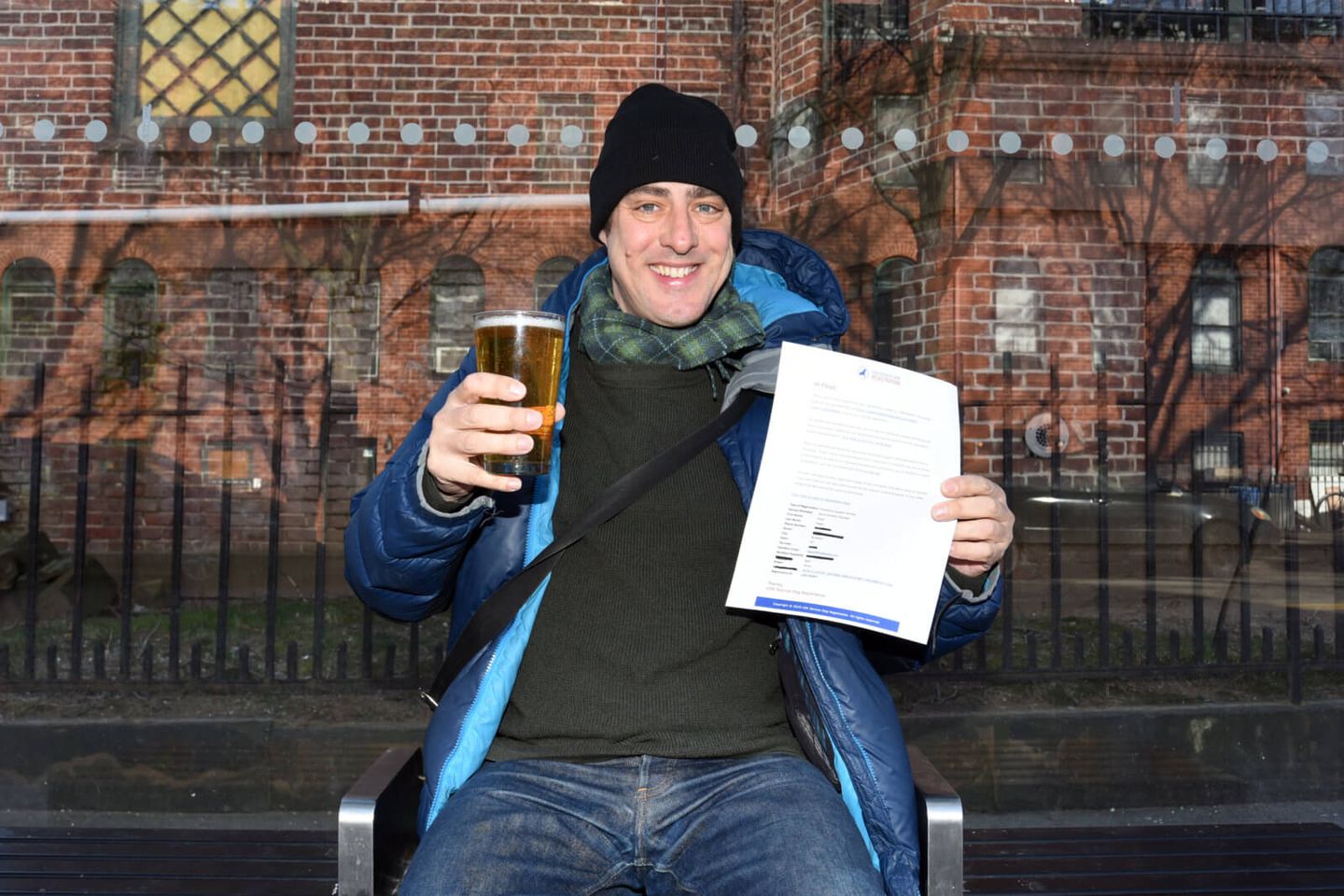 After a long, stressful day, many of us have turned to a nice cold beer to take the edge off.

Beer puts us in such a relaxing mood that a lot of people joke about needing an “Emotional Support Beer,” like a support animal. You can find the phrase on t-shirts and beer koozies.

But one beer-loving man took the joke to the next level, going as far as to actually register his beer as an emotional support animal!

Floyd Hayes, from Brooklyn, New York, got the idea after wondering if there was a legal loophole that could allow you to carry your beer around all day.

“I travel from upstate to Brooklyn a lot, and on the bus they say its a federal crime to smoke or have an alcoholic beverage unless by prior written contest, and I always wondered where you get that consent,” Floyd told Brooklyn Paper.

And he thought about emotional support animals — how certain pets are allowed in animal-prohibited places if they provide a service to their owners, like relieving anxiety.

So, he looked in to getting his beer registered as a service animal — and it turned out to be surprisingly easy to do.

He officially registered “beer” with the USA Service Dog Registration, saying it helped manage his social anxiety. Soon, he got an official registration code and certificate.

Of course, it was all in good fun. Floyd didn’t try to actually use the registration to drink beer on the bus or anything like that. Not that he could, according to sources from USA Service Dog Registration.

“He can register his beer all day long, it’s not going to get him anywhere,” an employee told Brooklyn Paper.

Floyd also wasn’t trying to make any political point or put down people who rely on service animals.

“I don’t mean it in a heady mental health manner,” Floyd said. “More if you go to a party, and want to break the ice.”

Definitely a good way to break the ice at a party. Flash that “emotional support beer” certificate and you know someone will get you a drink, stat.

While Floyd’s emotional support beer might not have any actual legal rights, it did make him a bit of a celebrity when word of his stunt went viral last year.

“I was originally just doing it to be silly,” Floyd told Brooklyn Paper. “But then it went on to be this global thing.”

He says he has since gotten plenty of offers from breweries looking to team up on a beer. But after a year of fielding requests looking for a “perfect deal,” Floyd finally has his very own beer.

Floyd, who has been spending time in upstate New York during the COVID-19 pandemic, recently teamed up with Woodstock Brewery to create the official “Emotional Support Beer,” a 6.7 ABV Citra Hops IPA.

After a year when many people needed the emotional support of a beer, the new product couldn’t come at a better time.

“In these trying times it has been ever more important that we provide and accept Emotional Support from those that are close to us,” Woodstock Brewery wrote on Facebook.

And best of all, a portion of the proceeds from the beer will go to Operation at Ease — fittingly, an organization that provides actual service dogs to veterans and first responders.

“Woodstock Brewing is launching this initiative to give thanks to those who supported us and to give back to those in need,” the brewery wrote.

Cheers to this idea — what started off as a goofy stunt turned out to be something that actually helps people in need.

Share this cool news with someone who could use an emotional support beer.