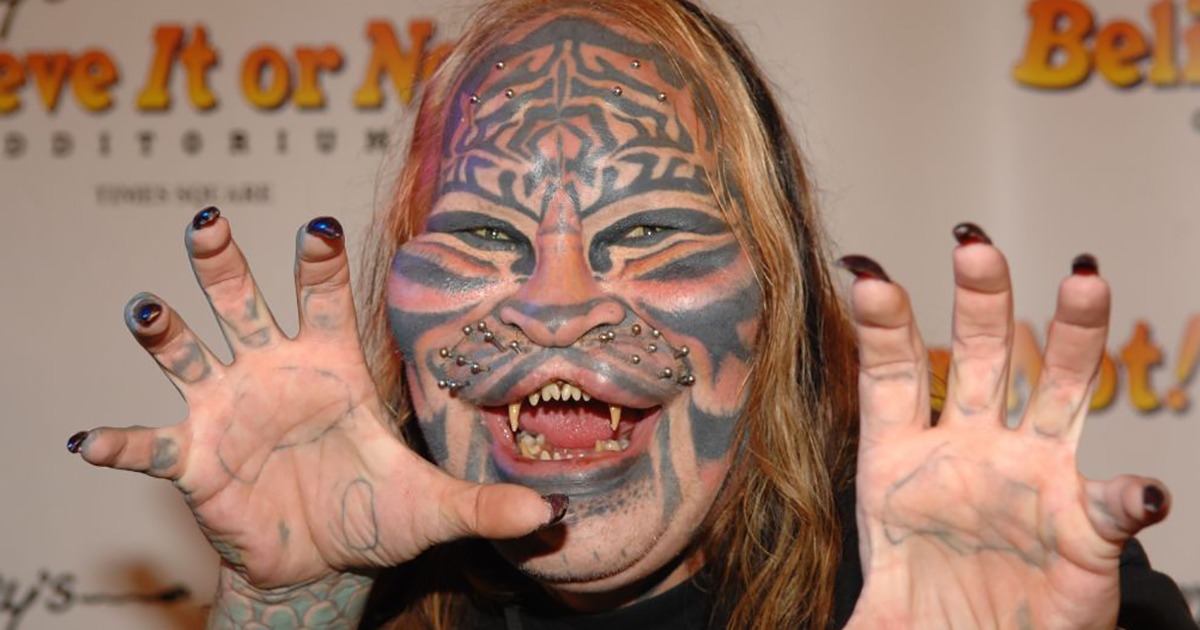 Over the years, we’ve seen several examples of individuals who have morphed their bodies in an attempt to look more like animals. Some cover their entire bodies with ink, while others use cosmetic surgeries as a form of “body art”.

It’s easy to dismiss these people as complete lunatics – but is that really the whole truth?

The remarkable story of Dennis Avner, also known as Stalking Cat, proves that there’s often very much more to a person than just appearance.

Dennis became widely known for his numerous body modifications, linked to his ambition to look like a female cat. In many senses, he lived a boundary-breaking life – but how he spent his last days is very sad…

For some people, plastic surgery is more about feeling more comfortable with their looks than it is completely changing their appearance. Ultimately, we should all be able to do what we want where our bodies are concerned, so long as what we’re doing doesn’t impose any risks upon our life. Put simply, our bodies are ours.

Of course, certain individuals take things that bit further; namely those who want to change their look entirely.

But it took a while before Dennis embarked on his radical body modification journey. In fact, he lived a very ordinary life before he became a famous face who appeared regularly on the red carpet in New York City.

But to understand why Avner decided to transform his face in attempt to look like a tiger, we have to start from the beginning.

Dennis Avner arrived to the world on August 27, 1958. He was born in Flint, Michigan at a time when the “Vehicle City” was vibrant and prosperous. His family later decided to move to Nothern, Michigan, settling down in the quiet Suttons Bay Township.

Growing up near the Grand Traverse Band of Ottawa and Chippewa in Sutton Bay, Avner became fascinated by the Native American tribe and the spiritual side of their culture.

Early on, “respect for the old ways” was passed down to him from a Huron medicine man, Avner told The Knight Ridder tribune in 2005.

It’s also evident that Avner had a penchant for programming and technology. After graduating from Oscoda High School in 1977, he served in the Navy as a submarine technician. When Avner was discharged in 1981, he moved to the San Diego area and started working as a computer technician.

At the same time, he also found himself a new interest: tattooing and surgically modifying his face. Driven by his vision and feelings of affinity for the female tiger, Avner went under the knife and began a series of procedures that would change his appearance.

”I’ve been a cat my entire life. I always related to cats. I always had a close relationship with cats,” Avner explained in an interview with Only Human.

In the ’80s, he started to go by his American Indian name, “Stalking Cat”. Some people also referred to him as the Catman. In 1985, body-modification artist Larry Hanks started his extensive tattoo work on Stalking Cat’s face.

Avner then turned to another artist who would do the surgical pointing of his ears. Over a period of 25 years, Avner continued to change his appearance to achieve oneness with what he called his totem, the tiger.

!I’m Huron and Lakota. I’m just taking a very old tradition, that to my knowledge is not practiced anymore,” Avner said.

Descended from American Indians, Avner decided to ‘follow the ways of the tiger’ after a conversation with a medicine man who told him to change his form to that of a tiger.

He removed his teeth and replaced them with tiger-like dentures; he even had his lip split to look like a cat. The most eye-catching features included six stain-less-steel mounts placed on his forehead and 18 piercings above his lip – which Avner could attache whiskers to on special occasions.

Furthermore, Stalking Cat had nose and brow implants, injections in his chin and lip, and silicone injected in his cheek. In addition to all this, he had a lot of tattoos that covered his entire body and face.

In interviews, Avner said that he lost count of all the procedures. But according to Entertainment Weekly, Stalking Cat underwent 14 surgeries, earning himself the Guinness world record for the “greatest number of surgical procedures undergone to look like an animal”.

Some of the procedures he went through hurt quite a lot. According to experts, Avner was seriously risking his health. Stalking Cat, though, believed it to all be worth it.

Avner believed he was following an old Wyandot (Huron) tradition by transforming himself into an animal. Self-transformation and rebirth are common among Native American tribes, but Avner followed his own personal beliefs – modifications like his are not the traditional practice among the Wyandot people.

Phoenix-based body-modification artist Steve Haworth was responsible for most of Stalking Cat’s most extreme procedures. As a result, Haworth has become a legendary figure in body-modification circles. Guinness World Records has been dubbed him the “Most Advanced Body Modification Artist” in the world, while Haworth has invented special medical instruments to develop his profession.

In addition to Stalking Cat, Haworth has worked with “The Lizardman”, ”The Enigma” and “Katzen the Tiger Lady”.

While living in San Diego, Avner got to know Tess Calhoun – a woman who would greatly impact his life. Tess and her husband, Rick Weiss, were very active in the “furry community,” a subculture that revolves around anthropomorphic animal characters with human personalities.

Avner, Tess, and her husband formed a strong trio, and became very close.

When Tess and her husband were forced to relocate to Washington because of Weiss’ job at Boeing, the couple asked Stalking Cat to move with them. Avner was then 47 years old and left his life in California to start a new one on Whidbey Island, where Tess and her husband settled down.

Avner helped Tess and her husband fix their house, and in many ways, Whidbey Island suited his unorthodox personality. The island, with a diverse mix of people, is still a well-known home to thriving artists, writers, and performers.

“The people here have been pretty welcoming,” Avner told The Daily Item in 2005.

But some of the islanders didn’t appreciate Avner’s colorful personality and eye-catching appearance.

When Stalking Cat revealed that he was moving to Whidbey Island, he received some less than friendly comments on his online journal. One person who called himself Atomicdrunk wrote, “We have a lots of hunters here. You can move here if you agree to stay in the woods and not wear orange.”

Together with Tess and Weiss, Avner continued to stay active in the furry community, both online and at conventions.

They hosted meetings in their house every month, and the publicity helped Stalking Cat increase his fame. For example, he guested on TV-shows and appeared on the red carpet at the opening of the Ripley’s Believe It Or Not! in New York and when they opened their new museum in London.

But dark clouds also began to hang on the horizon. After two years on Whidbey Island, Stalking Cat ran into financial problems.

According to The Seattle Times, Stalking Cat had spent over $200,000 on the transformation, and he was now running out of money. He reportedly applied for computer-related jobs in the Seattle area, but without much success. Eventually, the situation became so unsustainable that Tess and her husband asked Avner to move out, according to WikiFur.

Stalking Cat had no choice but to reach out to the public and ask for a new place to live. Thankfully, he had made many friends in the furry community, and one of them gave him a place to live in Tonopah, Nevada.

In Nevada, Avner started working with housing renovation. In 2010, he made one of his last appearances in the spotlight when Mark Dolan interviewed him for a documentary that aired the same year. In his episode of The World’s Strangest Plastic Surgery and Me, viewers once again met Stalking Cat, and he revealed that he made a living on public appearances and worked extra to help the elderly.

Stalking Cat cause of death

The next time the public heard about Stalking Cat was two years later, in 2012.

Rumors began to circulate that Stalking Cat had been found dead in his garage. Tragically, authorities confirmed this in November 2012. Several media outlets wrote about his death, but it was a while before the cause of death became known.

Shannon Larratt, who knew Stalking Cat, revealed what had happened on her blog, BMEzine.

“Dennis’s boundary-breaking life was never an easy one, and as he was fond of saying, he “found fame, but never fortune”. A wonderful and complex person, he was at times as troubled as he was remarkable, and he recently took his own life at the age of 54,” she wrote.

When the news of his death broke, many people from the body-modification community paid their condolences and shared their memories of Stalking Cat. It seems like he made quite an impression on the people he met, and many posted heartbreaking tributes in the comments section of the blog BMEzine.

“I met Stalking Cat aka tiger back in ac 2003 I believe it was. He was such a sweet and caring individual,” a user called Wolger Surface wrote.

”I remember appearing on Larry King with him. What struck most about him was his calm manner and the focus of his transformation. Where most people add to their mods at a whim, he knew where he was going and was steadfast about it. RIP Stalking Cat,” username Joey Strange added.

Obviously, Dennis Avner was a great inspiration to many, and he left an impression on the world – regardless of one’s personal opinion surrounding body modification. I love how the people in his life didn’t judge him for his choices, but rather by his personality.

Feel free to share this article if you also remember the Stalking Cat and if you want to keep his memory alive.