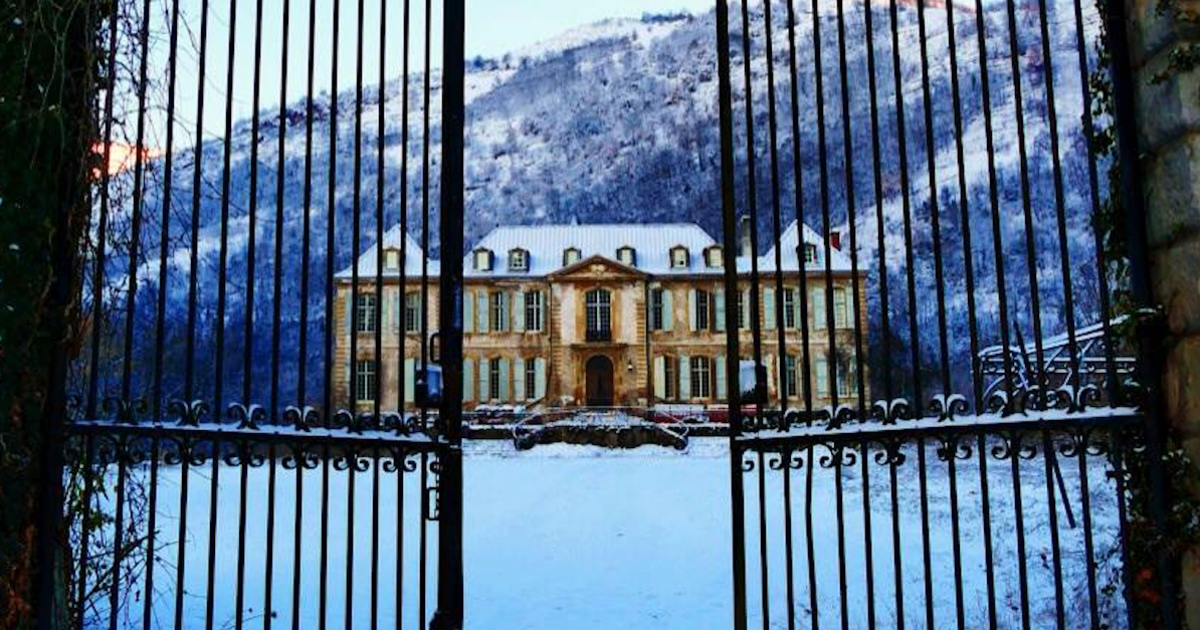 A house is just a house, until you make it your home. Whether it’s a cozy mobile home, or a renovated church, and now this renovated castle – I think it’s fascinating to see how people adapt their homes to their needs – and dreams. For many people, creating, and re-creating their home is a great joy. I think this is certainly true for Karina and Craig Waters. They dreamed of restoring and renovating a derelict abode somewhere around the world. The French Chateau de Gudanes is what they landed on. It began when the Australian couple traveled to France five years ago in search of a house. But everything they seemed to find was already to be moved into. That’s when Karina, Craig and their 16-year-old son Ben discovered a most interesting property online. The discovery would change the family’s life forever…

The family’s discovery of the gorgeous Chateau de Gudanes, nestled in the French Pyrenees blew them away. Chateau de Gudanes had been on sale for four years, but no ambitious buyers had yet stepped forward. Craig and Karina Waters fell for the historic building and knew it had huge potential.

The castle, which had long been abandoned, dates back to the 1300s. In the past, there was a fortress on the site, but it was destroyed in 1580 when the French Wars of Religion raged in France. On location now is thus the Chateau de Gudanes, built in the mid-1700s, commissioned by Louis Gaspard de Sales, Marquis of Gudanes. Gaspard, also known as the “King of the Pyrenees”, was an influential man who sat in Toulouse’s parliament. He had no problem spending a fortune on the castle’s construction.

In the 1990s, a company planned to convert the castle into luxury apartments. The plans were thankfully blocked by the French State, as the castle was deemed a historical monument. Builders however argued that the abandoned castle was a waste of space and rotting from within. When the Waters purchased the couple, its roof was collapsed in four different places and the building was moldy and water damaged.

Like a dormant dragon, the Chateau de Gudanes just waited till someone awoke it. The entrance up to the castle is marked by these distinguished gates.

The castle had no electricity, heat or water, but the building’s potential was no clear. The 1,000 square meters property also boasts a large garden. The Waters braced themselves – there was much to do. Their goal was to preserve the castle’s original atmosphere and style, even if that ambitious goal would prove to be easier said than done.

The couple bought the castle in 2013 but due to various reasons, they only begun the renovations eight months later. Initially, Karina managed the property the most, with Craig remaining behind busy with work in Australia. Needless to say, this meant Karina had much to do in the early stages of renovations. She left nothing to chance.

Fortunately, the castle was spared during the French Revolution. Some rooms still had have frescoes, wall paintings, fireplaces and other decorations from the past two centuries. Just to preserve these treasures was a major project in itself.

So there was much to live up to.

And it’s not just restoration that would take time to fix. Bureaucracy was a nightmare and took up a lot of Karina’s time and energy. Since the place has such great cultural value, she had to run everything first by the French authorities.

The couple’s plan was to be able to rent the property out. They planned for the glorious establishment to host conferences, weddings, a cafe and some rooms for rent.

Many thought the family was in over their head and would not be able to afford restoring the castle to its original state and splendor. And indeed when you take in the exceptional and intricate details preserved in the castle, such as this hand-painted artwork behind the old walls, I can understand why.

But, every year, more and more came into place.

One of the dining rooms was virtually completed. The table is made from a fallen tree from the large park.

Here’s what the construction of the kitchen floor looked like in 2014.

But eventually it worked out quite nicely, don’t you think?

The windows and shutters were restored. And what a lovely garden!

The surrounding area is truly magical.

Unfortunately, some parts of the castle were too damaged to fix. “It’s sad,” said Karina.

“Managing the cold isn’t easy. Keeping two fires going, chopping wood,” writes Karina. “We have two sort of warm rooms inside—10 degrees Celsius—and the remainder of the time I run or ride my bike between rooms to stop freezing in between. I’m sitting in the Château kitchen with my beanie, gloves, hot-water bottle, fire going, and cats running around my legs,” she wrote, according to Vogue.

But despite the cold, work continues: Terraces and floors are currently being leveled and repaired. As this floor upstairs, with terracotta tiles from the 1800s.

And in anticipation of warmer weather, Karina is planting roses.

“I planted the first of 72 18th-century Princess Louise perfumed roses,” she writes. “It was a beautiful moment, putting life back into the Château. They will one day climb the ancient stone walls.”

Learn more about the Waters’ efforts to restore the Chateau de Gudanes, and make sure you watch the fascinating video below.

Please share with your friends if you also hope the couple will manage to restore the castle to its former glory. And like if you think this is an amazingly beautiful place that should be preserved for future generations!