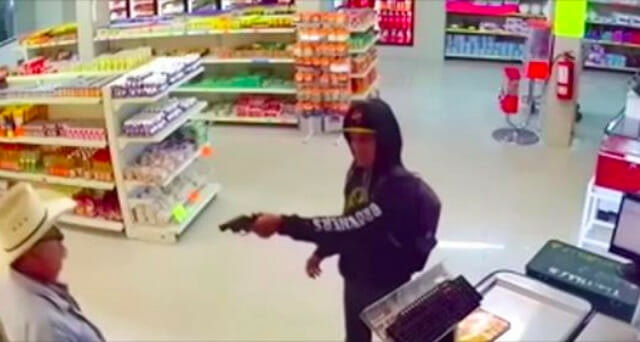 Law enforcers, such as the police, play an important role in our society.

But sometimes, even ‘ordinary’ people can seemingly do their job exceptionally well.

That’s what happened in this exceptional incident out of Monterrey, Mexico.

It all begins when a hooded, unidentified armed robber enters a butcher shop.

The man approaches the cash register and demands she hands over all the money on site. As the woman presumably starts preparing the cash for him, he turns his attention to an elderly man wearing a cowboy hat, standing right by the counter — and points his gun at him.

The cowboy looks more annoyed than anything else — and not the least bit phased. He simply calmly removes his glasses and places him on the counter next to him.

That’s when something gets the robber’s attention and he turns his back to him. Big mistake!

The cowboy immediately and unhesitatingly springs into action, as if he was just waiting for the right second all along.

He leaps towards the robber, swiftly removes his gun from him and overpowers him with the weight of his body. By this time, staff in the store have become aware of the commotion and rush to assist the cowboy and apprehend the robber.

This situation could have gone very very badly, but the cowboy’s swift reaction ensured everyone got out alive and unharmed — even the robber.

Police soon arrived on scene and arrested the man.

Watch the quick-thinking cowboy in action below.

This is what I call staying calm in the face of danger! This man has nerves of steel to say the least. Share if you were equally impressed by this cowboy!