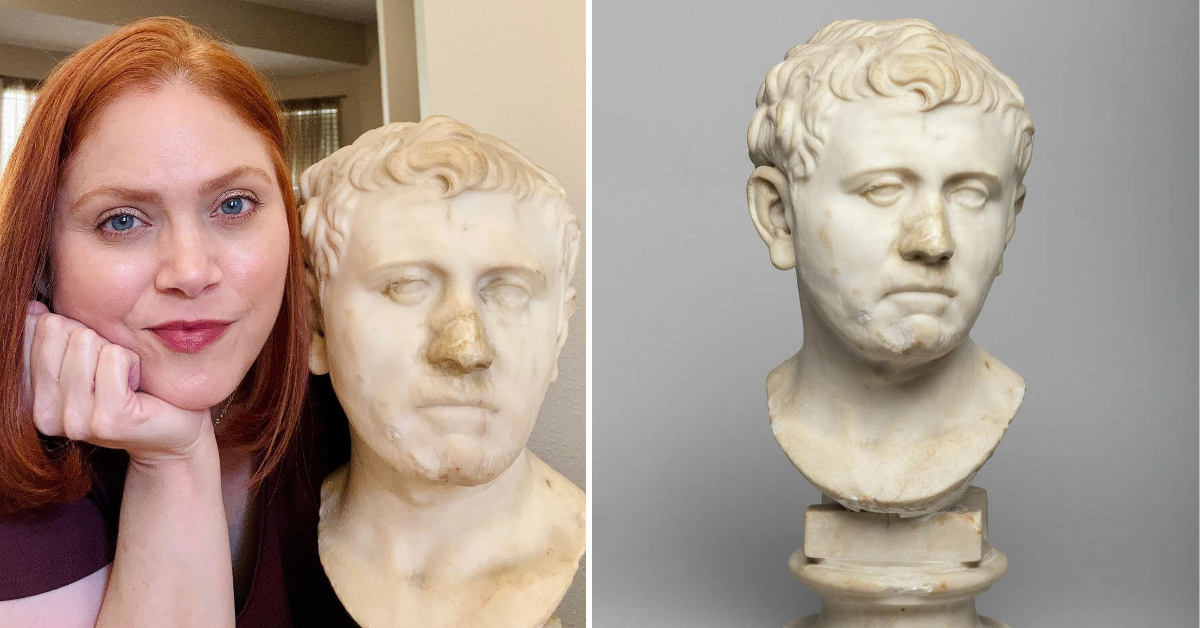 Going to thrift stores can be a fun shopping experience, a way to save money by buying secondhand or even picking up some cool, retro items.

But one woman got the thrift find of a lifetime, after picking up a piece of art that turned out to be an ancient Roman portrait 2,000 years old!

Laura Young is an art collector and antiques dealer from Austin, Texas who often goes to her local Goodwill looking for something interesting. But even she couldn’t have imagined just what she had on her hands when she picked up a marble bust back in 2018, sold to her for just $34.99.

“He looked Roman. He looked old,” Laura told San Antonio Express-News. “In the sunlight, it looked like something that could be very, very special.”

The San Antonio Museum of Art explains the piece originated in Aschaffenburg, Germany, as part of a full-scale model of the Pompejanum, a house in Pompeii. According to KUT, it was commissioned by German king Ludwig I, who was obsessed with Pompeii and wanted a replica to store his Roman artwork.

Laura’s statue, a portrait of a man named Drusus Germanicus, was among the artwork housed there. So how did it end up all the way in Texas with no one noticing? The answer is likely World War II.

Pompejanum was reportedly heavily damaged in the war during a battle between Nazi Germany and the US Army, and it’s likely that a US soldier looted the art, or bought it from a looter, and secretly brought it back to the US.

Little else is known about Germanicus’ journey to the Texas Goodwill, but its status as a potentially looted artwork from another country made things complicated for Laura, who spent three years working with an art lawyer to restore the artwork back to its rightful owners.

In the meantime, this 2,000-year-old bust found a home in Laura’s apartment, where she grew attached to the head, nicknaming him “Dennis” after a character from It’s Always Sunny in Philadelphia.

“I got attached to him in our house, right there in the entryway,” she told Express-News. “You could see his reflection on the television. He became part of the house.”

But eventually, an agreement was made to get the portrait back in his rightful place. The sculpture will be returned to Germany, but the Bavarian Administration of State-Owned Palaces agreed to loan it to the San Antonio Museum of Art for a year, letting him stay in Texas just a bit longer.

Having to part with the statue that was in her home for so long, Laura told 12 News that it was “bittersweet,” but she was glad to be a “small part of its long and complicated history,” adding he “looked great in the house while I had him.”

And thankfully, the statue is still right nearby, so she has been able to visit in his new temporary home.

“It was really, really exciting to see him in a museum,” she told Express-News. “It was kind of surreal; he had been in our living room for over three years.”

“He’d been hidden for 70 to 80 years, I thought he deserved to be seen and studied.”

While it was bittersweet that Laura didn’t get to keep or sell the bust, this is certainly one of the best thrift store finds we’ve ever heard of. And after all, getting to be an exciting part of history is what antiquing is all about.

“It’s a great story whose plot includes the World War II-era, international diplomacy, art of the ancient Mediterranean, thrift shop sleuthing, historic Bavarian royalty, and the thoughtful stewardship of those who care for and preserve the arts,” said Emily Ballew Neff of the San Antonio Museum of Art, per 12 News.

And Laura will always have something to remember her old friend by: she told KUT that before giving it to the museum, she made a 3D model, so she can keep her own copy in her apartment.

What a find! We’re glad that Laura got this ancient artwork back to its rightful place in history, and she’ll always have some great memories and an amazing story to tell.