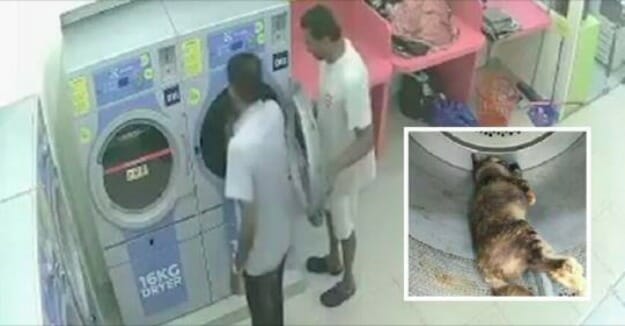 Police in Malaysia have arrested two men accused of putting a pregnant cat in a dryer and killing it.

Surveillance camera video footage shows the men in their extreme cruel act of animal abuse at a public laundromat.

The men put the cat in the dryer and then leave the salon briefly. When they return, they start the dryer using coins — and let the machine do the dirty work for them.

A customer later found the lifeless cat’s body in the dryer and contacted the police.

The men were reported for animal abuse and could be sentenced to three years in jail if convicted.

A third suspect, seen on the video footage as an accomplice, is still at large. The police continue the search.

This extreme case has caused a stir, especially on social networks. Numerous animal welfare organizations shared the images of the security camera in order to seize the animal abusers.

This is no doubt a particularly cruel case of animal cruelty, and for the poor cat, unfortunately, all help came too late.

Thankfully, the police’s willingness to to intervene and apprehend the suspects is a glimmer of hope on the horizon: Animal cruelty is often recognized as a trivial offence. Share this post if you demand fair punishment for animal tormentors.