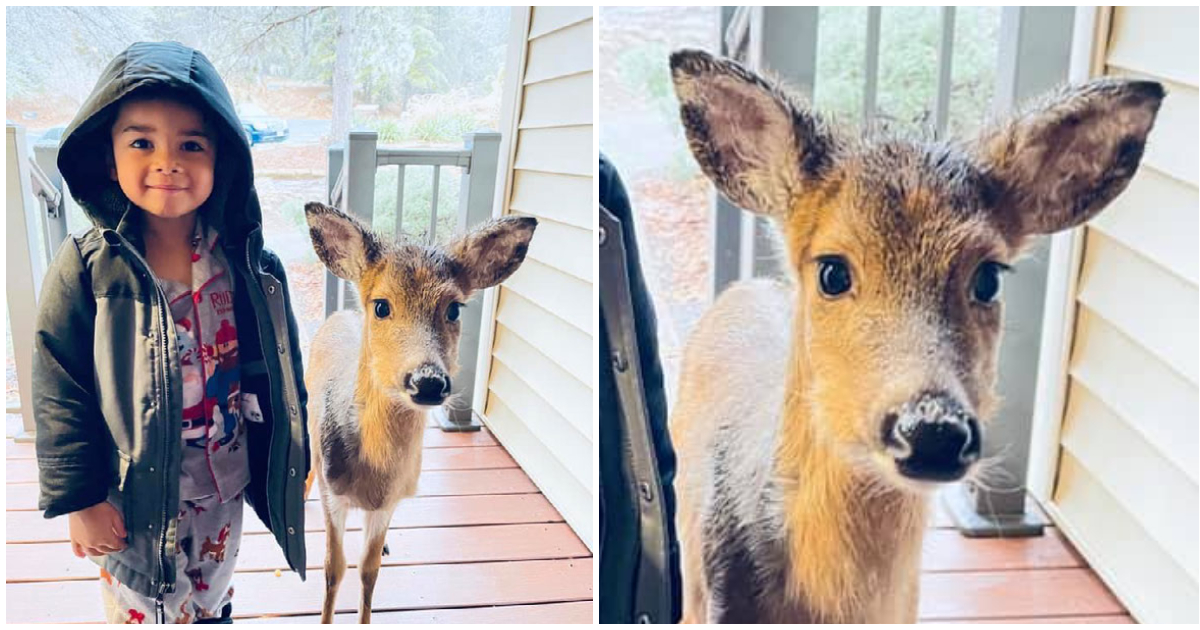 Deer are some of the most beautiful wildlife you can find in your own backyard. Every lucky encounter with one of these gentle creatures is a blessing.

But one mom got a big surprise when her son brought a very unexpected new friend to their house, an adorable encounter that is now going viral.

Stephanie Brown was staying in a rental home in Massanutten, Virginia with her 4-year-old son Dominic. The family was getting ready to head home, and Stephanie was unpacking things from the fridge while Dominic played outside in the yard.

Stephanie heard Dominic wiping his boots on the mat, ready to come inside. But mom realized he had an unexpected guest with him:

Dominic brought the deer home, and it was clear that they had become fast friends. Dominic, smiling there in his Rudolph pajamas seemed totally at ease with the wild animal, and the deer seemed totally ready to follow him inside, maybe to be his new pet.

“He was… ready to bring the deer into our house,” Stephanie told WRIC. “Like it wasn’t anything strange for him.”

Mom, however, had a very different reaction.

“I was completely shocked!” Stephanie told WWBT. “I froze for a second because I literally didn’t know what to do!”

But the family was getting ready to leave the house, and apparently didn’t agree with the 4-year-old that a deer would be a perfect pet. So instead, Stephanie asked him to go let the deer be with his own family.

“I asked Dominic to walk his new friend back to the woods so his mommy could find him,” she said.

But not before snapping an adorable photo that has now lit up the internet, gaining 32,000 shares on Facebook in just a few days.

How adorable! This kid definitely has a way with animals.

This made our day — share this story to spread some good news!