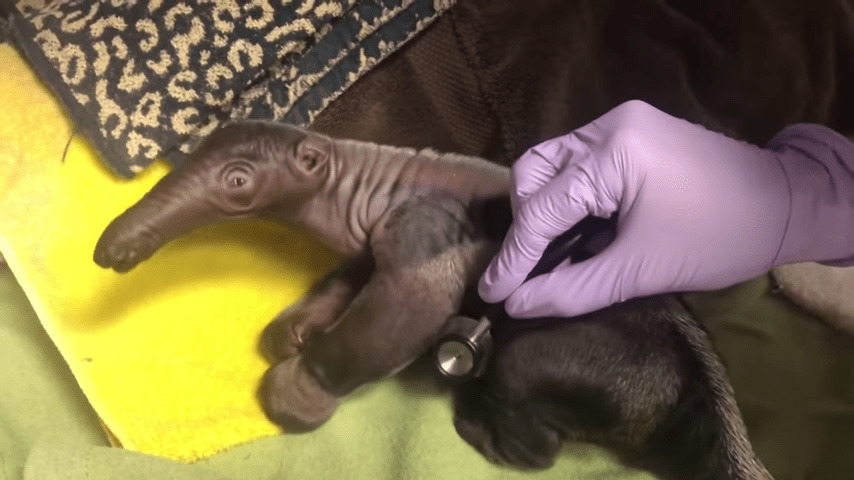 It’s always exciting when a new baby animal is born at the zoo, but sometimes the births don’t always go so smoothly.

Last month, a newborn baby anteater nearly died after being born in the cold and abandoned by his mother, but with some love and care he’s made a miraculous survival and recovery.

On December 8 at Zoo Miami, a female giant anteater named Laura gave birth to a male baby. But the mother left the newborn all alone in the corner of her holding area, and it happened to be one of the coldest nights of the year in Miami.

At first, it looked like the newborn anteater wouldn’t make it.

“The newborn was found abandoned in the corner of its holding area, weak and cold,” Zoo Miami said in a press release. “Upon discovery, it was immediately transported to the zoo hospital where the animal health team placed it into intensive care.”

“Though there was significant doubt that the newborn would survive.”

But after receiving warmth and fluids, including milk collected from his mother, the newborn slowly began to recover.

After 48 hours, the baby was well enough that the zookeepers attempted to reintroduce him to his mother for care. Sadly, she rejected him once again, and the newborn had to be cared for round-the-clock by the human staff.

They named the anteater “Ziggy Ebenezer.”

They continued to see improvements, as Ziggy went from feeding from a tube to being bottle-fed, and his coat began to grow in. They said they were “cautiously optimistic” he had survived the worst.

Ziggy’s incredible, odds-defying survival story went viral, the zoo posted an update, revealing that the anteater was continuing to grow and heal.

“He is doing very well and continuing to gain weight,” Zoo Miami wrote on Facebook. “Our wonderful staff will continue to hand-rear him until he is big enough to be introduced to his habitat.”

“Thank you to our community for the warm wishes in welcoming ‘Ziggy Ebenezer’, the baby boy anteater, to the family!”

We’re so glad this baby anteater survived this ordeal, and is doing so well now! Share this incredible story!