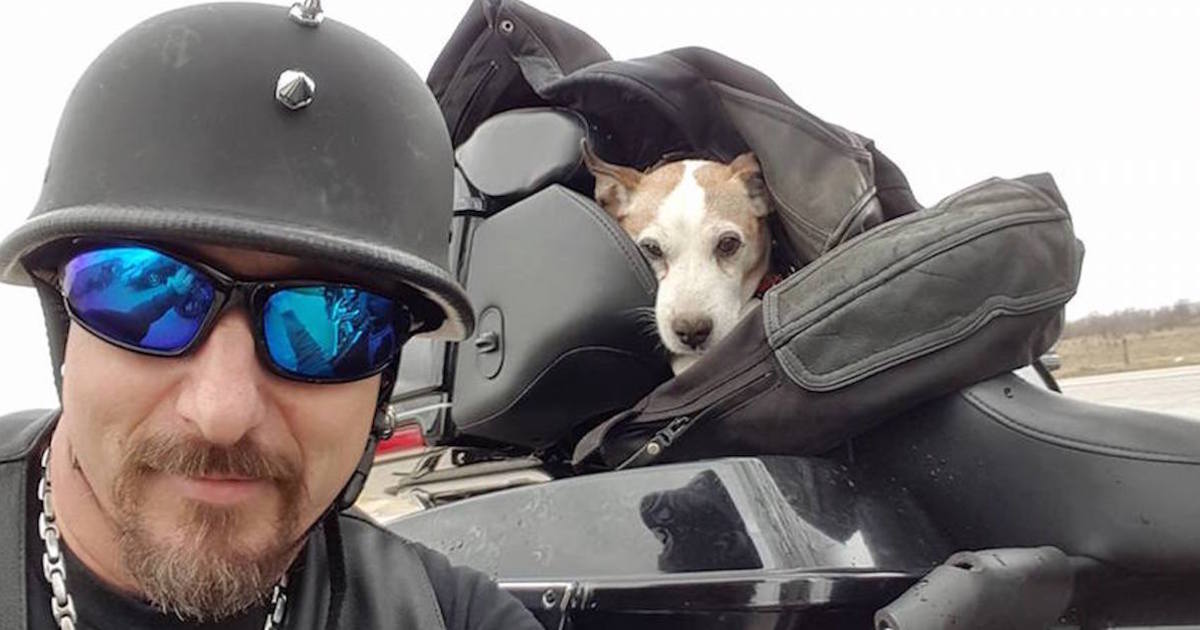 The open road is no place for a lonely pup, especially in Texas, where you can cruise the open highway for miles and miles without reaching even a convenience store or gas station. So imagine being an abused dog left for dead out there. It’s unthinkable that anyone would force a dog to go through that, and yet, it happens. But fortunately for one such Texas dog, luck came rolling in on two wheels. Brandon Turnbow, a biker from Burleson, Texas, was out riding on Highway 171 when he spotted a man beating an innocent white dog on the side of the road. Brandon was shocked as he watched what was happening in his rearview mirror.

After the guy threw the dog to the curb and drove off, Brandon first “went after the guy just to give him a number one sign,” Brandon wrote on Facebook.

Then, Brandon turned his bike around and went into full hero mode. The Texas biker snapped the white pup up on the spot, saving his life and giving him a second chance. Brandon wrote about the meeting: “And I now have a co-pilot—Meet Mr. Davidson.”

With Mr. Dadvison secured on the back of the bike, the duo rode Brandon’s beloved Harley for the rest of the day.

By the end of the day, Brandon decided to adopt Mr. Davidson and give him the home he deserved.

“Well looks like my co-pilot has found peace,” Brandon wrote on Facebook. “His belly is full and he found the pillow.”

Brandon was so touched by his experience with Mr. Davidson that he started a non-profit organization called Baaang Bikers Against Animal Abuse National Global. He put out this message to all bikers: “Let’s all join together to make this happen on an epic scale. I know there are a lot of bikers out there that love animals, so how would you like it if we sent bikers to collect abused animals near you?”

When Brandon isn’t riding his motorcycle, he’s singing and writing songs. In fact, rescuing Mr. Davidson inspired him to write a song about his new best friend. Check it out below.

If you were also moved by Brandon’s compassion, share this inspiring story with your friends on Facebook!