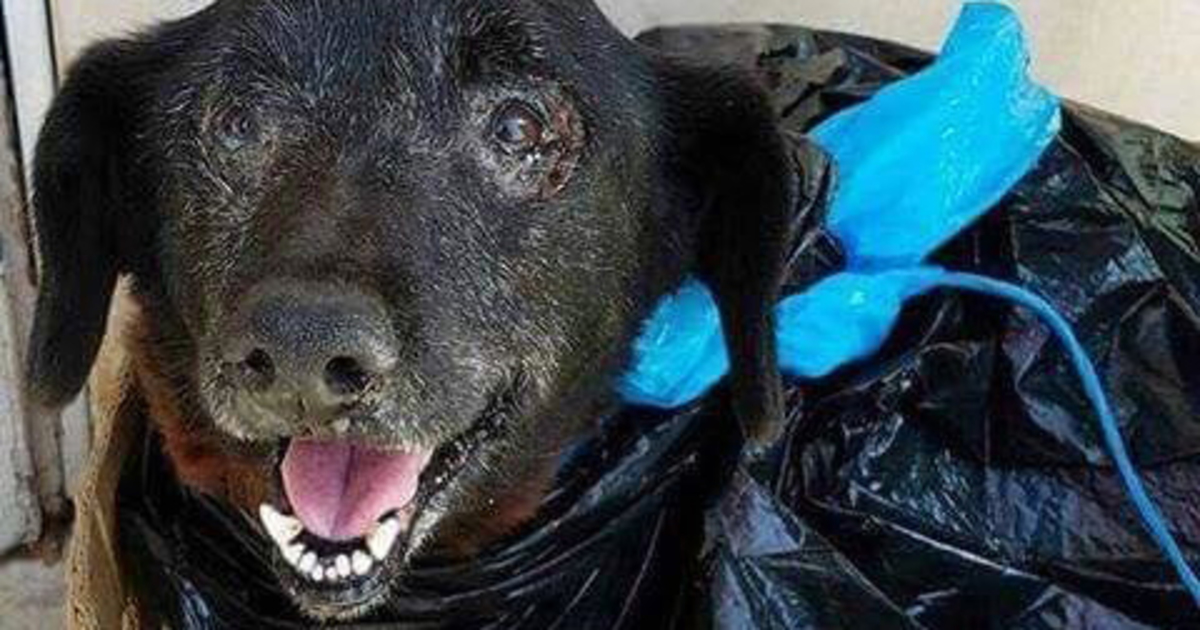 It’s often said that dogs are a man’s best friend. So it’s especially painful to see someone deliberately hurt a dog who’s done nothing but show that person love.

Blackie is a loving, happy dog who lives a good life today. But that wasn’t always the case.

When Blackie got sick, it was too much for her previous owner, who decided to get rid of her.

What Blackie’s owner did left people both furious and disgusted. Some people should never be allow to have animals.

Blackie had a painful tumor on her tail and was bleeeding heavily. And because her owner didn’t want blood on their car seats, they stuffed Blackie in a trash bag..

Blackie’s owner then drove her to an animal shelter, carried her inside, and walked away.

“Blackie was surrendered because she was bleeding all over,” Kelly Smíšek told The Dodo.

Kelly works at an organization in San Diego, California called Frosted Faces Foundation, which rescues and cares for older animals.

When Kelly heard about Blackie’s tragic fate, she knew she had to help. Volunteers drove to the shelter where Blackie was and brought her to the Frosted Faces Foundation.

After all that Blackie had been through, she was still a loving and curious dog who always wanted to make people happy.

“You can tell that her love has not been reciprocated for a long time,” Kelly says.

Now, Blackie is safe and gets the love she deserves. She has become quite relaxed in the presence of Kelly and all the volunteers.

When Blackie arrived at the Frosted Faces Foundation, cleaning her was quite the endeavor. The staff started by brushing through her fur…

Then, they gave her a nice shower…

And gave her a healthy bowl of food.

Blackie enjoyed finally getting attention and love again, but when volunteers tried to care for her, she was constantly reminded of her tumor.

“She would correct us with her mouth when we tried to touch it while bathing her,” Kelly says.

Blackie was in a lot of pain because of her tumor, but soon it would just be a memory.

Blackie had her tail removed and spent the next couple weeks healing.

Then, the idea was to find her a loving adoptive family.

“She is a loyal dog and will find a deserving family quickly — I am sure of it,” Kelly said at the time.

By that point, Blackie’s story had gone viral and Kelly’s prediction proved true!

Now, Blackie has a new family, a new start in life — and a new name.

“Blackie, the dog surrendered in a trash bag to Carson Shelter, is doing well in her new home,” the Frosted Faces Foundation wrote on its Facebook page. “Her new name is Betty and she fits right in perfectly and her family said they love her already!”

And she even has siblings!

I’m so glad Blackie is finally getting the love she deserves and I sincerely hope that no other animal has to go through what Blackie was forced to go through.