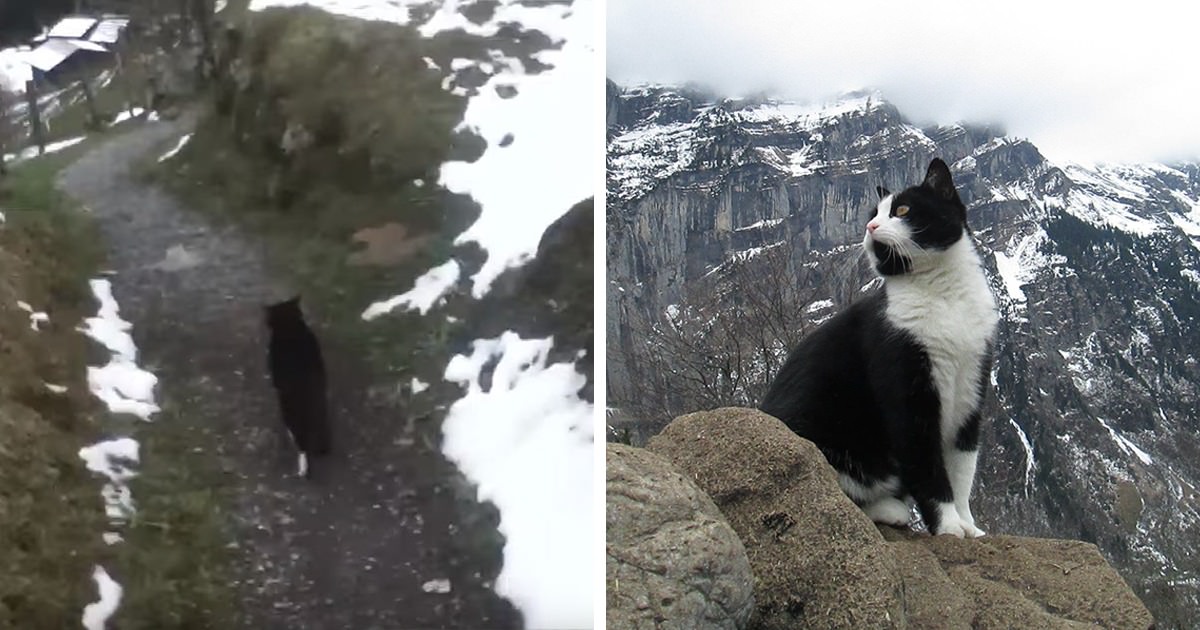 When you think of a lost hiker in the mountains, you probably think of search parties, ski patrols, and if it’s Switzerland, maybe some Bernese mountain dogs.

But when a Hungarian man got lost in the little village of Gimmelwald a few years back, he relied on a very different and unlikely guide to bring him back to civilization—a cat!

Recently, this cat’s story has been winning the hearts of thousands on reddit. I don’t know if I’d call it a “rescue” story myself, but I like to believe that it was more than just a walk in the mountains together.

It actually made me think of Native America spirit animals. I like to think that this cat knew what was best for this lost hiker and made sure that she got the traveler safely to where he he needed to be.

Scroll down to read the lost traveler’s version of the story as well as pictures of the heroic cat and a sweet video (with English subtitles) of the smart cat guiding him down the mountain:

“Gimmelwald is a tiny, tiny stunningly beautiful village. I actually got ‘lost’ in the surrounding mountains. It was the end of ski season when I got to Lauterbrunnen, so the lifts weren’t working and some of the trails were closed,” reddit user sc4s2cg wrote.

“I was checking my map to see how I can get back to the hostel, and the only official way down was through a trail that was closed. And that’s how I met that handsome cat.”

“As soon as I got up, she started guiding me along some path. She seemed super friendly considering I was a total stranger, must be used to the tourist crowd that comes annually in that region.”

“This was the only cat I saw… She wasn’t really randomly wandering the mountains, rather I think she lives in the town I was in (Gimmelwald).”

“She was walking and kept looking at me to follow, led me straight to the path that would take me back down to the valley.”

Watch this sweet video to see the pair’s adventure together:

The traveller added, “We actually separated right at the end of that video. I had to get down, and she had a territory to protect!”

Wasn’t that sweet? Share this video with all of your friends who know how clever cats can be!