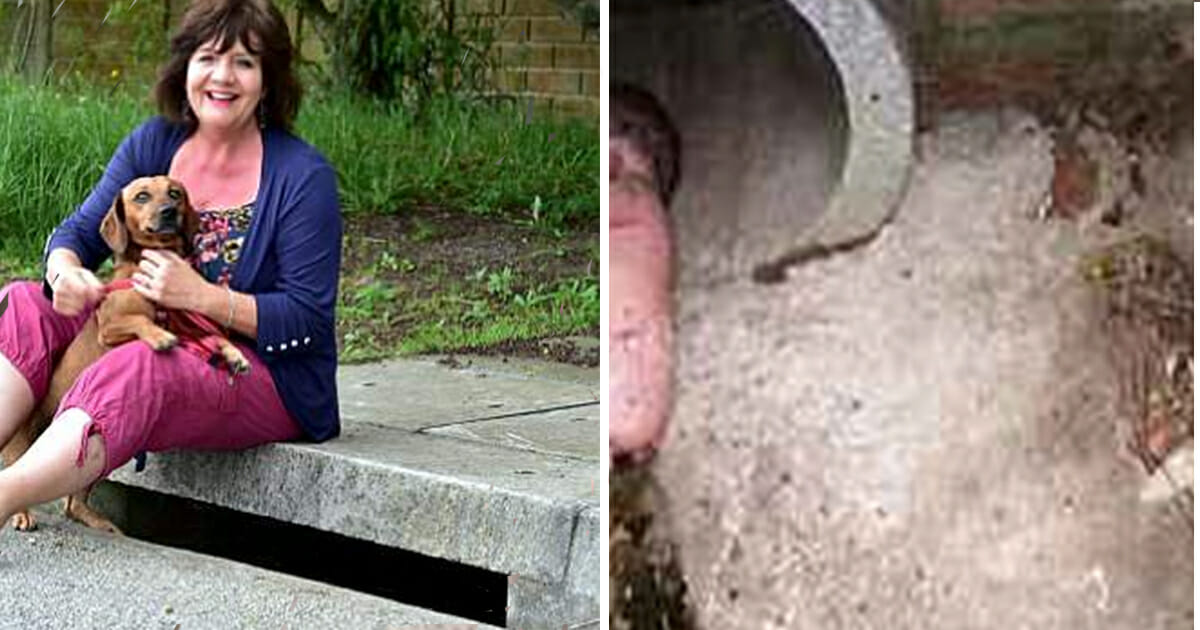 It seemed like a normal day for Charmaine Keevy when she took her dog, Georgie, for a walk on April 3.

The 63-year-old and her pet Dachshund often take different routes when out walking in Port Elizabeth, South Africa. On that particular day, their walk took them past a storm drain.

No sooner had they neared the drain, did Georgie begin to bark madly.

When Charmaine took a closer look, she couldn’t believe her eyes …

According to Charmaine, Georgie is scared of cats, so when she heard cries coming from within the drain she thought perhaps a cat had gotten itself stuck.

As per Liftable, Charmaine said: “I first thought it was a cat because he is scared of cats, but then when I heard the cries again, I realized it was a baby.”

That’s right, a baby. She quickly flagged down a car belonging to Cornie Viljoen. He used a steel bar to lift the concrete covering from the drain and reveal a shocking truth.

There was a newborn baby lying naked – its umbilical cord still attached – at the base of the drain.

Viljoen climbed down into the 6-foot deep hole and worked his way down towards the baby. As he did so he encountered red ants that began to bite his legs – the baby was lucky they weren’t where she was.

Viljoen told the Daily Mail: “I didn’t know if the baby was injured so I tried to pick her up very carefully and very slowly and she was so small. I just wanted to hold her for a while but I knew that she needed urgent medical help.”

Viljoen hoisted the baby up to Keevy, who wrapped the child in her jersey and comforted her as they waited for emergency services to arrive. When they did, the baby was immediately taken to hospital with hypothermia and respiratory issues.

“I honestly believe I was meant to find that baby, especially because I usually take a different route on our walks. I cannot help but feel that there is some sort of plan and a purpose for that little girls’ life — it is a miracle without a doubt,” Keevy said.

At the moment, the hospital are still trying to locate the mother of the baby they’ve named Grace April.

Charmaine posted an update to Facebook in which she confirmed Grace April is still alive and well on the mend in an incubator, despite claims to the contrary being spread on social media.

“I am absolutely delighted to share that I held, cuddled, kissed and even bathed our special little newborn from Lorraine when we met with her and her new safety family on Sunday afternoon. Baby Grace, as they refer to her for now, is doing fantastically well and getting prettier by the day. Her temporary mom works from home, so between mom and dad, Baby Grace enjoys all the love and attention that she deserves – around the clock! It was such a super wonderful (but very tearful) experience to hold Gods beautiful little gift in my arms once again. I look forward to sharing regular updates on her health and well being, as and when I can. Thank you again to a generous public for your outpouring of love and prayers!”♥️”, Charmaine Keevy said to Kingfisher FM.

How fortunate that Georgie was able to hear the baby’s screams, and how lucky that Charmaine decided to stop and investigate the problem. We don’t know how Grace April ended up in the storm drain, but it seems she’s the fighting type!

Share this story to honour the heroic people involved in the rescue effort.