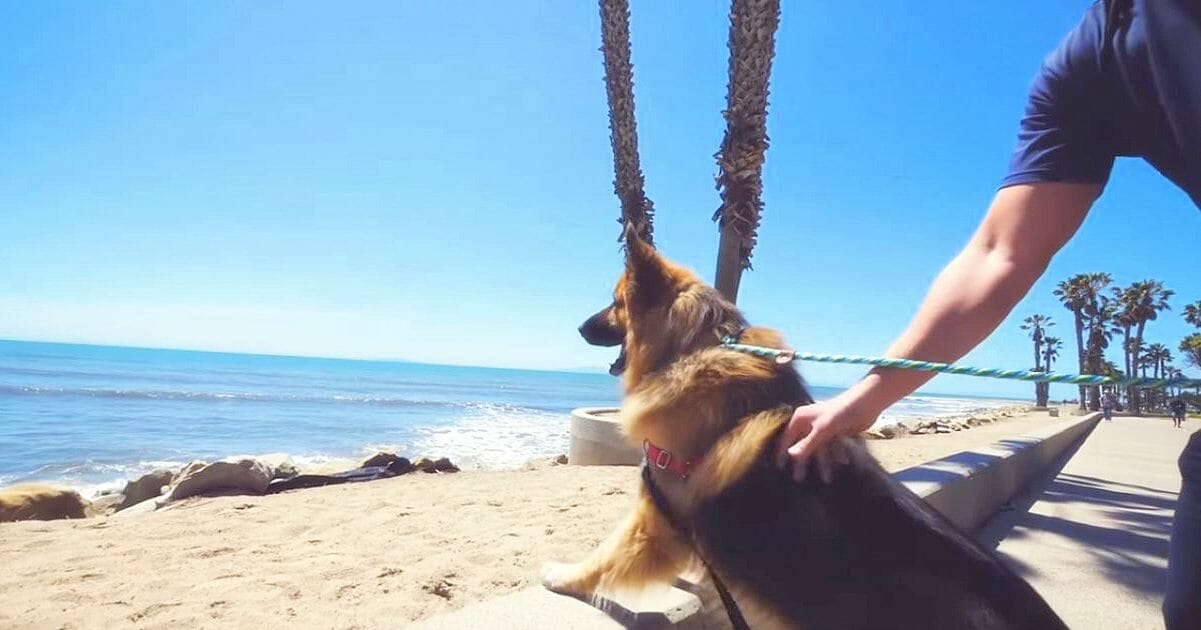 The broad impression of certain dog breeds seems to change over the years depending on what’s ‘trendy’.

Take for example German Shepherds, who were once viewed by large swathes of people as dangerous and unpredictable due to their size and fearsome appearance. That’s no longer the case now, for the most part, since many of us are aware they’re perfect companions if trained and brought up correctly.

Unfortunately, however, that doesn’t go for everyone. Herschel, a German Shepherd, spent five years chained up in a backyard, neglected, alone, and largely forgotten.

Which is why when he was rescued and taken for a dog day out, his joy is simply infectious …

Herschel had been chained up in the backyard of his previous owner. One glance at the photo illustrates how he had tried to chew through his chain in an attempt to get free.

He was taken to a shelter twice, and was almost never handed his second chance in life.

Fortunately, though, FoundAnimals Adopt & Shop picked up Herschel, and were then able to find a new forever home in Washington for the dog as sweet as he looks.

It was on the journey from Los Angeles to Washington that the pup was given his first taste of true freedom. Without a doubt, though, the highlight of his trip was getting to see the ocean for the first time.

In the video he can be heard screaming when he encounters the waves, before growing uncontrollably excited upon feeling sand for the first time ever. It’s the pure, unadulterated happiness he exhibits that’s turned this into the viral video it’s become.

You see, Herschel is more than just a dog who’s been saved. He’s proof that all animals feel and appreciate kindness, even after they’ve been abused or neglected for large portions of their life. It’s important to remember that dogs can be every bit as precious when they’re being given a second chance as they can when you buy them as puppies. Sometimes more so, in fact, because they’ve seen the depths humans are capable of going to, and more often than not they’re still prepared to show love and trust to the person who gives them it in return.

Watch Herschel’s brilliant reaction to seeing the sea below:

I don’t know about you, but this video brought tears of joy to my eyes.