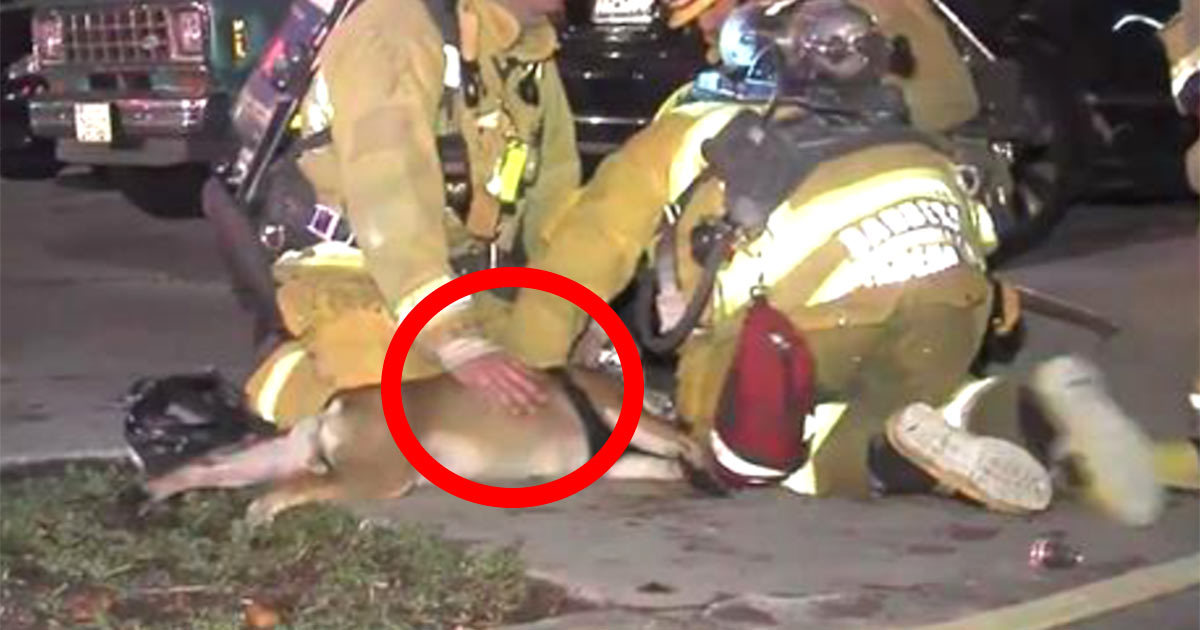 When a building burns, the situation is always dangerous, but the danger becomes a nightmare when there’s no escape. But that’s exactly the situation a bulldog named Potato found himself in recently when his owner’s Los Angeles apartment went up in flames. The fire couldn’t have come at a worse time, as it was after midnight and Potato’s owner was out. Luckily, though, neighbors called the fire department, who rushed to the scene. Without hesitation, the brave firefighters broke down the apartment door and risked their lives by going in. Witnesses say that at the point, thick black smoke billowed out from the apartment into the hallway. Upon entering the apartment, firefighters found Potato unresponsive on the floor. By a stroke of luck, the bulldog was alive, if unable to breathe. “I thought the dog was really going to die,” witness Martha Sanchez told NBC News. But firefighters never gave up on Potato and proceeded to do everything they could to save his life.

The rescuers rush Potato outside to get him away from the smoke and then began to resuscitate him outside the building. One firefighter made sure Potato was comfortable while the other gave the bulldog oxygen and water. This video reveals the care the firefighters took to save Potato’s life.

The work of the firefighters quickly paid off, because pretty soon, Potato was back up on his feet.

Later that morning, Potato was reunited with his owner, who took the bulldog to the vet. Los Angeles Fire Department Battalion Chief Dean Zipperman talked to Potato’s owner and then told NBC Los Angeles, “We’re happy to report we spoke to the owner and Potato is doing well at the vet… getting a checkup.”

The fire chief, who is also a dog owner, added, “I’m glad we can help the people we do. It’s gratification. Every day we go home and we feel we made a difference and impact.”

If you’re as inspired by the LA Fire Department’s bravery as we are, share this with your friends.
Newsner loves animals and believes in treating them with utmost respect. Please like if you do, too.