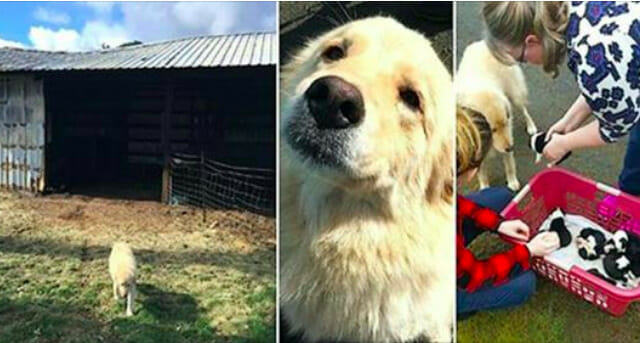 Losing someone you love is a terrible experience — this can be especially true if it was the outcome of an accident.

Life can seem difficult to continue living following such tragedy. There’s simply nothing worse than seeing someone you love be taken from you and not being able to do anything about it.

A fire broke out in her barn, launching a devastating, burning inferno for the animals inside.

The fire took the lives of four goats and a pig. But, perhaps most tragic of all, Jessica’s beloved dog Daisy lost her litter of 3-week old puppies.

Jessica tried to rescue the litter from the burning barn, but it was too late. She watched helplessly as the poor pups burned alive.

She also had to hold back Daisy, who tried to rush into the blazing barn.

“It took just a few minutes. It was terrible,” says Jessica, who believes the fire started by a heat lamp which was meant to keep the litter warm.

Daisy was crushed following the incident. She became depressed and refused to eat.

But perhaps most heartbreaking of all was how the mama dog went down to the barn every day and sat outside the door, waiting. It was clear that she missed her puppies terribly and yearned to see them.

Jessica desperately wanted to help mend Daisy’s broken heart. So she had an idea — she took to Facebook and post a public request, asking if anyone happened to know of any local puppies in need of a foster home.

Lorna and Jessica arranged a meeting, and Daisy came along…

Watch the video below to see what happens when the mama dog sees the new litter of pups — simply amazing!

Some seem to believe dogs don’t have feelings. But this story really proves the opposite!

Well done by owner Jessica to help her beloved friend heal — no one should go through something so sad alone, not even a dog.

Please share this beautiful story if touched you, too!