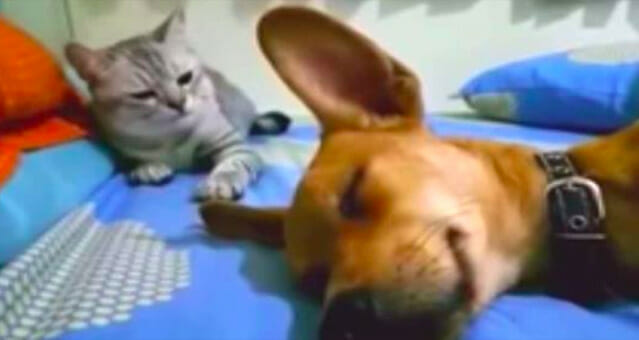 It’s a timeless cliche: “cats and dogs” are simply not meant to get along.

But there are certainly exceptions in which cats and dogs live in harmony within a family — and are even good friends.

Here’s a couple that not only manage to seem to be able to get along, but do so just the way any other pair of siblings would — with a some disagreements and loads of laughs…

One day, the pets’ owner watched as the dog napped and the cat laid on his side — though the latter was awake.

The video of the two friends begins quite innocently as the owner decides to film the sweet moment. The camera captures the dog who is sound asleep and the cat next to him, just relaxing.

But that’s when the hilarious moment happens.

Suddenly, viewers can hear a sound that is well, familiar, but a little unexpected — and even the cat seems to clearly understands what just happened.

The dog, blissfully ignorant, has just released a loud fart in his sleep!

It is of course possible that the noise was later edited into the video as a joke due to the cat’s next hilarious reaction — which you can see for yourself in the video below.

Don’t be selfish now, please share if you had a good laugh, too!