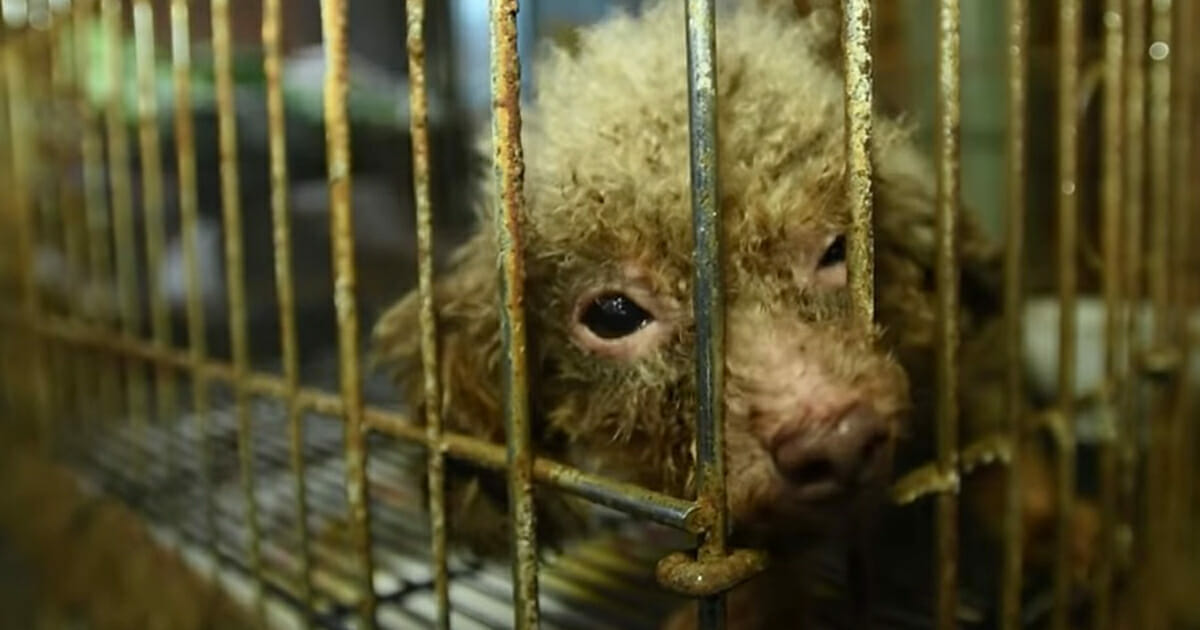 Animals should never be confined to captivity … this much any sane human being will accept.

Just imagine the dog who is forced to live his or her life in a cage, without access to light. It’s so heartbreaking I simply don’t know where to begin.

And yet it was the horrific reality for the dog in this story. BB was found locked in a cellar in Cabarrus County, North Carolina, in such terrible conditions that it makes my heart bleed simply to write of them.

The pictures come courtesy of the animal heroes at the Humane Society, who set free around 130 animals trapped at the puppy mill during the raid.

The dogs were afraid, confused, and exposed to things no animal should be. Fortunately, they were about to be delivered into a whole new life.

Tiny poodle BB weighed just over 2.2Ibs and only had three healthy teeth in her mouth. The others were so rotten that they had to be removed.

It was an anonymous tip that led to the raid being conducted. In addition to BB, 104 other dogs were rescued, as well as 20 cats and three goats.

BB and the others lived in tiny cages in a dark and stuffy basement that lacked even basic ventilation.

Soon, however, BB’s hell would be over. Brenda Tortoreo, who had previously worked at the vets where BB was treated, decided to give her a forever home.

“She was very tiny, and she looked like this helpless creature,” Animal crimes manager at HSUS Jessica Lauginiger said in an interview.

It’s believed BB had never seen sunlight, and her contact with humans had been minimal.

“I put my hand up to the cage, and she’d come up and sniff a little bit. She was very hesitant for human attention, but she wanted it.”

It’s suspected that BB was used for breeding a number of times over the years, and in the beginning her rescuers had a difficult time working out her age, such was the state of her appearance. When she was finally taken from the basement, though, BB looked upon the sunlight with a face that said everything.

She’d never ever known the feeling of grass under her paws, and now she has a second chance to live the life she truly deserves.

Watch the video below to see her amazing transformation!

Please share this video to pay tribute to all the animal heroes who work tirelessly to help dogs like BB.