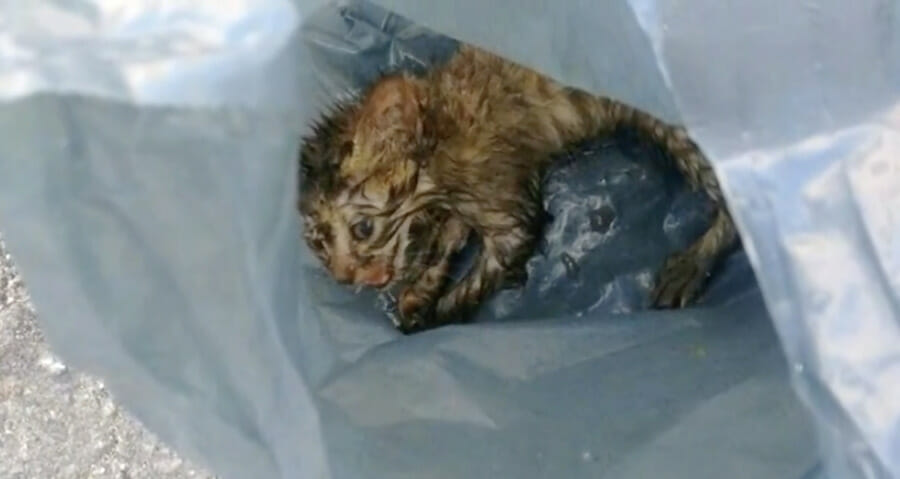 I never can understand why people continue to abuse and neglect animals.

As is always the case, it’s the minority that can’t help but attempt to ruin things for the majority, but the very concept of hurting a creature solely dependant on you seems so alien.

Every day the internet is provided with more and more stories of animals being found abandoned in bizarre places; in some cases left behind by their owners simply for the crime of being born.

This particular story focuses on a women who stumbled across a suffocating kitten, trapped in a bag after its owner had decided to throw it out …

The woman in question was out walking her dog through a neighborhood in Rio de Janeiro when she spotted a small trash bag.

At the same time, she began to hear sounds suspiciously similar to meowing, and so decided she’d better investigate.

Upon closer inspection, however, she found a tiny kitten in distress.

The woman freed the kitten from his bonds, and took him home to give him a warm bath.

After that, she began to nurse him back to health, giving him a temporary bed and all the food and warmth he needed.

In just one week, the cat – who she named Dobby – had made a full recovery. Today, Dobby has plenty of brothers and sisters to play with, and the days where he feared for his life are long gone.

For every person determined to be cruel towards a helpless animal, there are several who will stand up for their rights and protect them!

Full the full story on Dobby’s rescue, see the video below:

Thanks to the compassion shown by animal heroes like this woman, we’re able to save no end of creatures each year.