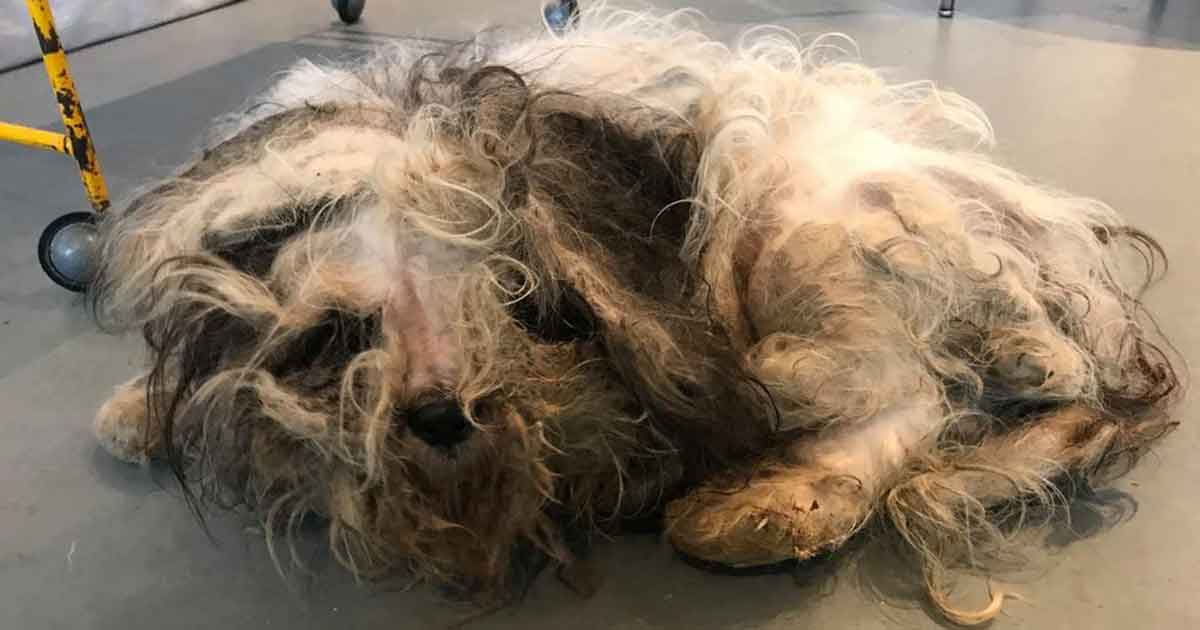 The stray immediately caught their attention for one reason alone: It was impossible to discern what breed he was. Put plainly, the dog was hiding within his own fur. We’ll never know what sort of life he lived on the streets, but it hardly seems like it was sunshine and roses for the loveable pooch.

Today, pictures of Sang Su have spread around the internet like wildfire, shocking people all over the world, according to ABC Chicago. Take one look at the mess of hair – which was heavy with the stench of urine – and you’ll realize exactly why …

The local TV channel reported that rescuers had trouble telling where the dog’s face and ears were when they first picked him up.

That’s how much of a state he’d been allowed to get into.

It was in late September that Sang Su was taken under the wing of the Trio Animal Foundation.

He weighed in at just over 26 pounds when he arrived.

Before they could even begin the process of cleaning and cutting poor Sang Su, they first had to soak him with water to help remove the smell of urine.

It was so strong, it burned the noses of those nearby.

“In all, Sang Su had over 3 pounds of fur cut away from his body.”

In total, over 3 pounds of fur was cut away from Sang Su’s body.

Eventually, it transpired that under all the muck and filth; under the shaggy quilt of tangled fur, an excitable little cocker spaniel was hiding.

This is what Sang Su looked like by the time they were done:

And what wonderful eyes he has!

Sang Su's ears are wrapped because after having the matted fur that weighted down his ears shaved off, he began to develop ear hematomas. The poor boy couldn't stop shaking his head.

Although it’s clear that Sang Su’s condition has greatly improved since he was rescued from the streets, he still has a fair way to go, according to ABC. His ears are infected and have wounds on them, whilst his skin and eyes are also infected, having remained trapped under his fur for so long.

Slowly but surely, however, he is progressing. Sang Su has now started to eat a little better!

Here he is meeting another dog, Eeyore.

Eeyore (left) meets Sang Su. They were really good together. Sang Su is wearing a No Flap Ear Wrap to keep him from shaking his head and causing his ears to form hematomas.

Sang Su has officially won Eeyore over… ear wraps and all!

What a fantastic recovery he’s made! I hope that it continues as such and he ends up in a new home that will give him lots of love. Feel free to share the story to celebrate Sang Su’s new-found happiness in life!