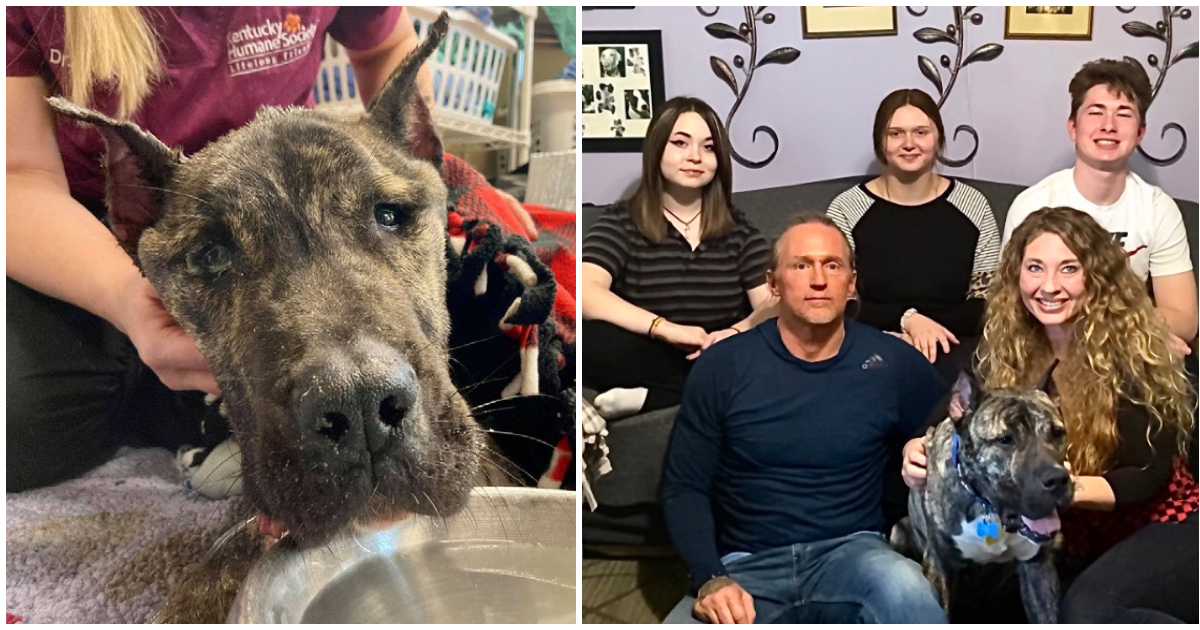 Few animals have touched people’s hearts like Ethan, the dog who was found starved and on the verge of death outside the Kentucky Humane Society, but who has made an incredible recovery over the past month.

His inspiring story has earned him love and support from all over, he even inspired an update to Kentucky’s animal abuse laws.

But now, there is another update about Ethan, and it’s the best news of all: he’s officially found his forever home!

Ethan’s road to a new life began in late January, when he was abandoned outside the Kentucky Humane Society. A family dropping off donations found him, and were shocked by his emaciated state.

KHS staff took the dog in for emergency medical treatment, and estimated just a 50/50 chance of survival. Ethan was severely underweight and malnourished, and they suspected that he had been left in a cage by his previous owner, going a long time without any food.

But after a rocky start where no one was sure if Ethan would survive another day, the dog began to pull through.

While he was initially too weak to even lift his own head to eat, he regained his strength and within weeks he doubled his body weight.

And as he recovered, Ethan knew a loving home for the first time. He was taken in as a foster by KHS staff member Jeff Callaway.

With a big family, spacious home and other dogs to play with, Ethan adjusted and fit right in.

“He was so brave to explore his new surroundings,” Jeff said in a Facebook post. “He gets along so well with other dogs and cats. He’s very patient and gentle when interacting with anyone.”

As Ethan’s story has developed, he’s gotten plenty of attention from fans around the country. But the question everyone wants to know is, when will this great dog be able to find his “forever home”?

It turns out, he’s already found one.

In an inspiring update to the Ethan saga, the KHS announced yesterday morning that Ethan would officially be adopted by Jeff and his family!

“We are so, so excited to be able to adopt Ethan!” Jeff said. “He is already such a huge part of our family.”

“From the very beginning, it’s always been about Ethan and what is best for him and his future. I believe with all my heart he is in the right place. There’s nothing we wouldn’t do for him.”

This type of situation is sometimes called a “foster fail,” but it’s safe to say this is anything but a failure. There’s no home better for Ethan than with the people who loved him throughout his incredible recovery.

Jeff and his family thanked everyone who supported Ethan over the past few weeks, and the KHS is planning to have an official “adoption celebration” next week on March 10.

The family has also promised to keep fans updated about Ethan’s story as he settles into his forever home.

We’re so happy Ethan is getting adopted! After everything he’s been through he deserves a loving forever home.