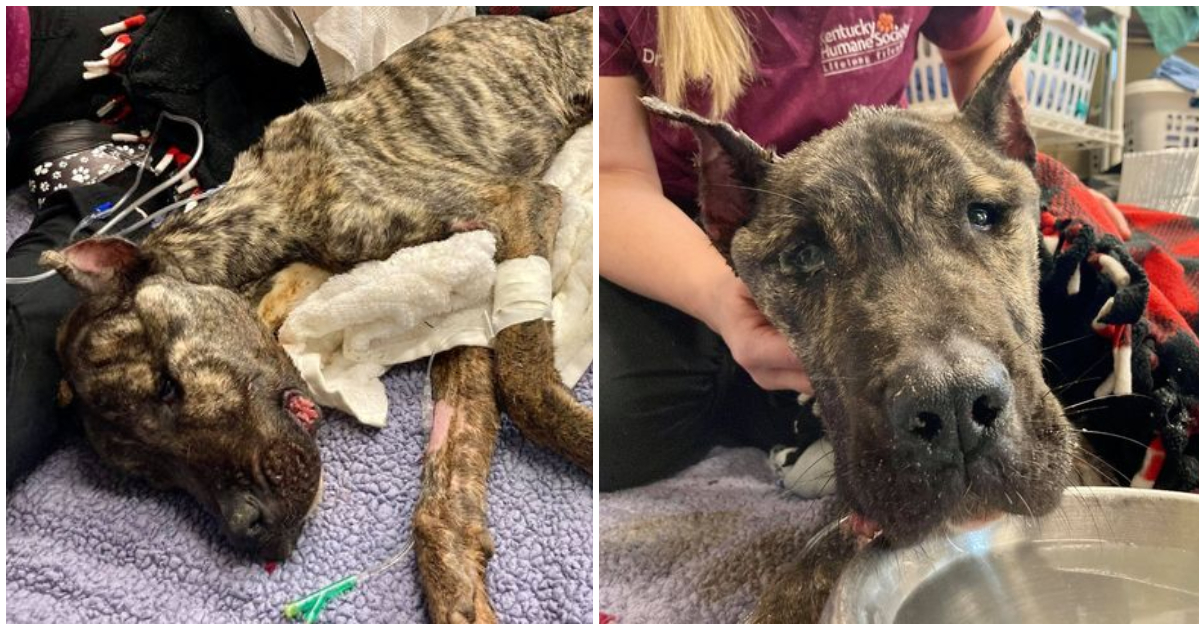 It’s truly shocking the way some people treat their dogs. We’ve seen far too many stories of dogs being abandoned by their owners, left for dead in terrible conditions.

These animals’ only hope is to be found by someone who will give them the love and care they need — and even then, it’s an uphill battle.

That’s the case for one poor dog, who was found withering away after being locked up and starved for weeks. Now, he’s in a fight for his life.

On January 29, someone was dropping off donations to the Kentucky Humane Society when they discovered a dog left in the parking lot. He was severely underweight and on the verge of death. Staff was alerted and rushed to give the dog emergency veterinary care.

They described the dog as the thinnest they had ever seen. He was barely hanging on, and it was a miracle he was alive at all.

“This rack of bones weighs just 38 pounds, when he should be about 80 pounds,” the Kentucky Humane Society wrote. “The outline of every bone can be seen from his dehydrated skin, and his muscle loss is extreme, as his body tried to find any fuel to survive.”

They named the dog Ethan. Based on his condition, vets suspected that he had been left in a crate for weeks with no food.

It isn’t known who abandoned him, nor whether he was “purposefully abandoned” or just left behind by someone who expected to return.

The KHS has asked for anyone with information about the dog to come forward. But while many questions remain, the priority now has been to keep Ethan alive.

His condition has been touch-and-go ever since he was found. According to KHS, a vet tech took him in and put him on IV fluids, but when he took a turn for the worse he was brought to the emergency hospital.

Ethan has since been reported as being “alive and is in critical but stable condition.” He can now eat and drink, and while he’s still too weak and needs help keeping his head up, it’s still a promising sign.

“We are taking it very slow and steady and are hoping that he is strong enough to fight,” KHS wrote.

On January 31, the KHS reported that Ethan had survived another night, and while he was “in no way out of the woods,” there was one new development they described as an “absolute miracle”: Ethan wagged his tail for the first time, a reminder of how far he’s come.

Ethan is now getting the best of care, with round-the-clock monitoring and proper nutrition.

While this poor dog is hanging in strong, the KHS cautions that his chances of survival as of now are still 50/50. “Every day he is with us is a miracle,” they wrote this morning.

“Please continue to keep Ethan in your thoughts and prayers,” the KHS wrote. “We’ve never wanted so badly for an animal to survive and be able to have the happy ending they so desperately deserve.”

It’s unimaginable that someone would abandon their dog like this, but we’re glad Ethan was found and now has a chance of survival.

Stay strong, Ethan! We know you can make it! Share this story and show your support for this struggling dog!