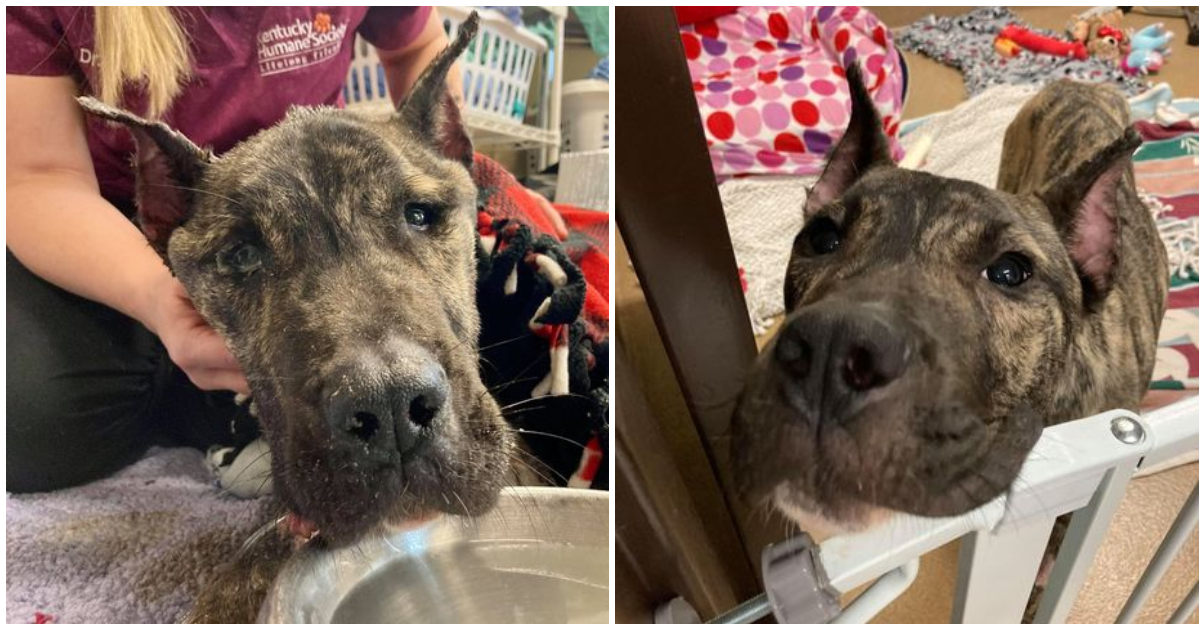 Last week we told you the story of Ethan, the poor dog who had been left for dead after being abandoned in a crate.

His fight for survival has become a nationwide story, with people everywhere praying and hoping for his recovery.

But now we have a hopeful update to this heartbreaking story, as Ethan continues to recover… and inspire a new animal cruelty law.

Ethan was found outside the Kentucky Humane Society late last month, and was severely underweight, dehydrated and suffering from severe muscle loss. They described him as the thinnest dog they had ever seen.

It appeared he had been locked up in a crate for weeks with no food, and was found on the verge of death.

“The outline of every bone can be seen from his dehydrated skin, and his muscle loss is extreme, as his body tried to find any fuel to survive,” KHS wrote.

While they described his odds of survival as just 50/50, they did everything they could to keep him alive and give him a fighting chance.

But the past week has seen some good news. His most recent lab tests from the vet were described as “excellent,” according to the KHS.

And while Ethan was originally too weak to even hold his head up to eat food, he’s now gaining weight and learning to walk again.

“He is still battling slight anemia due to starvation and nutritional deficiency but is being supplemented with vitamins that he loves to eat!” the KHS wrote. “He is ready to come off iv fluids which is a huge step in the right direction.”

“Ethan spent much of the weekend practicing his walk and he doesn’t stumble as much as he did last week! We couldn’t be more pleased with his progress so far and his recovery is a testament to his strength and perseverance. He is one amazing dog!”

Ethan’s heartbreaking story and miraculous recovery has won hearts across the country.

People have sent in donations to the Kentucky Humane Society, along with get-well cards for Ethan. He now has his own cozy room full of blankets and toys.

And most importantly, he’s also inspired a major change to animal abuse laws in his home state.

According to WHAS 11, Kentucky State Representative Chris Freeland introduced House Bill 57 (HB-57), which aims to increase protections for animals by adding to their animal welfare laws’ definition of torture, as well as changing animal torture a Class D felony instead of a Class A misdemeanor.

Kentucky currently ranks 47th of US states in regards to animal protection laws, according to KHAS. “I’m just trying to make sure Kentucky moves up the ladder somewhat on our animal welfare rules,” Rep. Freeland said. “This is another step to move us in the right direction.”

He specifically cited the story of Ethan as a reason for the bill. It has reportedly received bipartisan support.

The Kentucky Humane Society was thrilled by the news, thanking Rep. Freeland and encouraging others to support the bill.

“If you live in Kentucky, we encourage you to contact your house representative and thank them for caring about companion animals like Ethan,” KHS wrote.

In the meantime, they will continue to care for the dog who has defied the odds and made an improbable recovery. According to an update from this morning, Ethan is now 63 pounds, up from 38 pounds when he was first found.

“He’s starting to show us his fun loving personality! He is always up for a treat and loves the toys and snacks that everyone has donated to our shelter animals!” KHS wrote. “He is wagging his tail all the time now and wants love all day long. He is being treated like a king and is loving every minute of it!”

Yesterday, they shared a before-and-after pic, showing how far Ethan has come and how much his personality has improved.

“We will never be able to fully understand what Ethan went through, but we will make sure that from now on, all this boy knows is love and devotion,” they wrote. “The sadness in his eyes is disappearing a little every day and there’s no better gift to us than seeing him happy.”

We’re so glad Ethan is doing well and continues to make a recovery! And we hope he inspires this much-needed animal torture bill to pass!