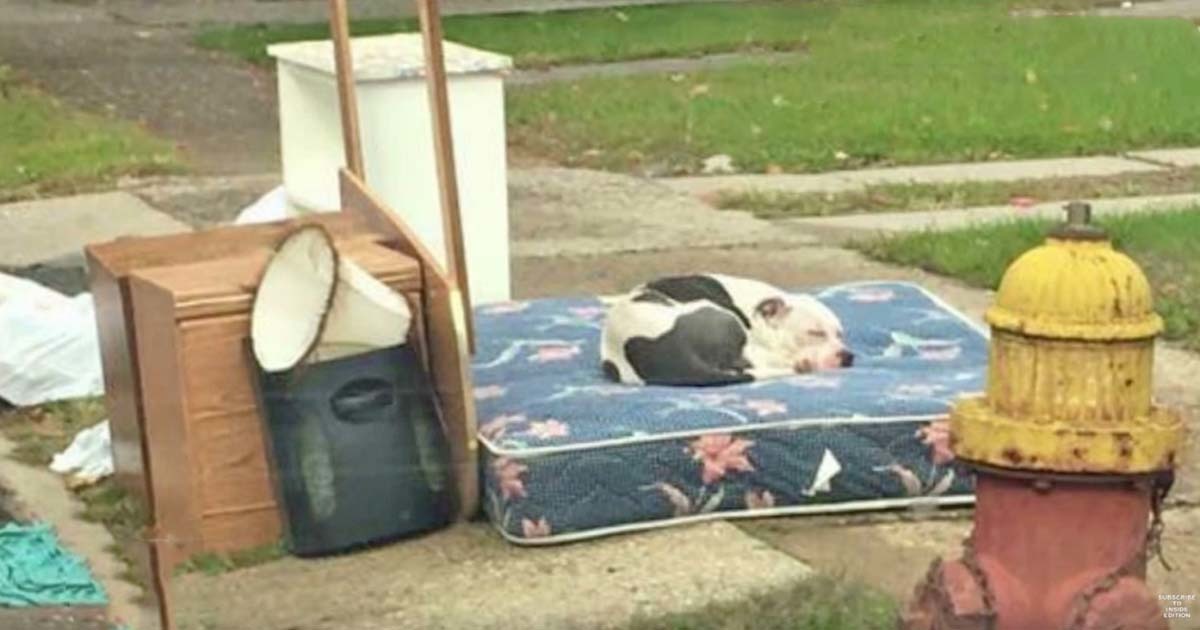 A family packed up all their belongings and prepared to leave their once beloved home. But before leaving, they dumped all the garbage that they no longer wanted on their front lawn. And among that garbage, shockingly, was a pit bull named Boo.

This horrendous act naturally led to the neighbors’ concern. One neighbor in particular was so upset that he decided to take action.

So he took a picture of Boo, and posted it on Facebook. And that changed everything.

When it was time to move, the family took everything with them- except what they no longer wanted.

Among their old junk was Boo, alone, heartbroken and hungry. According to one of the neighbors, the former residents of the house had even returned to pick up some stuff from the junk pile, but totally ignored Boo.

One of the neighbors watched in horror at what the family did – and knew right away that he had to help Boo to find a new, and much better family. A family that actually knew how to treat animals in the way they deserve. He snapped a picture of Boo, laying sadly among the trash, and posted it on Facebook. The photo quickly spread and shared by thousands of animal lovers. Finally, Boo’s photo reached a man by the name of Mike Diesel.

Mike went straight to the point: he was interested in giving Boo the life he deserved. He quickly made his way to the front lawn where Boo remained, alone and sad. Aware that the dog was probably heartbroken and insecure, he approached him with caution. His patience paid off -within a day, Boo accepted to be led into the car with him, after being showered with food and kind words from Mike.

Mike had the patience to win Boo’s confidence – and that allowed Boo to show Mike what a wonderful dog he was. Today, the two are best friends, living happily together. Boo certainly must have felt terrible after being abandoned by his former family, but Mike’s love and care is sure making up for it!

Destiny is a funny thing!

Aren’t happy endings the best? Please share this story if it warmed your heart, too!