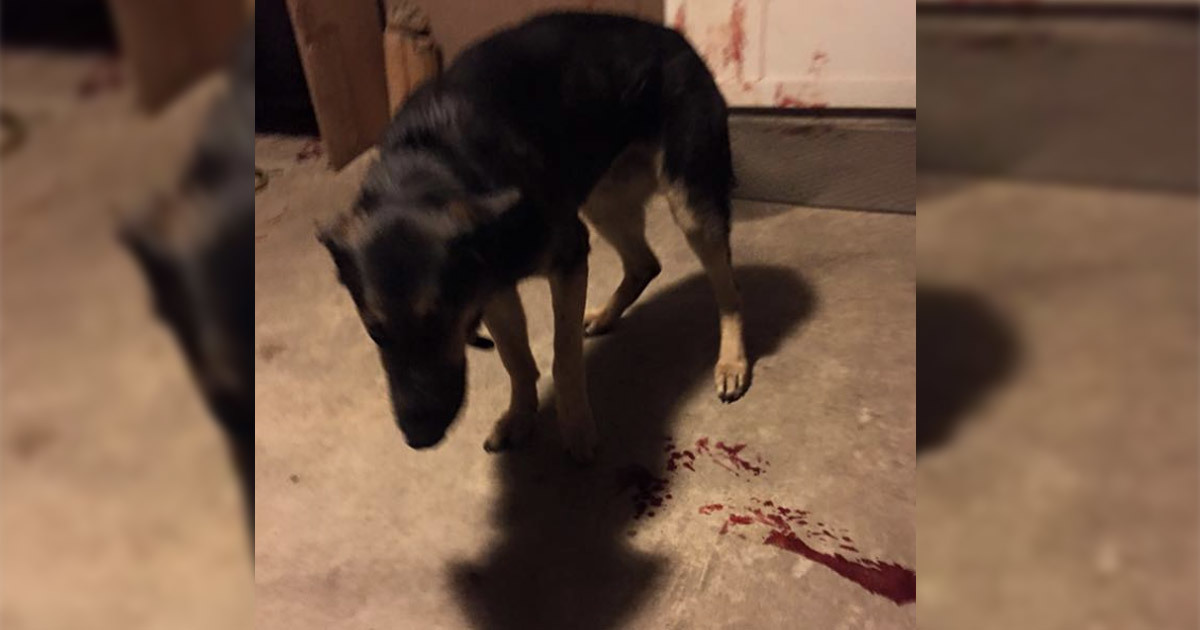 It makes me so angry and sad when I hear about someone intentionally injuring an animal.

This story is about just that. But sadly, it needs to be told so we can shed light on this subject.

To me, pets are like family members and I cannot understand how someone would do such a thing to their dog.

When I read who hurt the dog in this story, I could hardly believe it was true.

My only hope is that if more people find out about what happened, another animals will be spared from going through the same thing.

When Angie Laymon and her family came home from church one day, they had an unpleasant surprise.

The family’s beloved dog Bruno was on the balcony and bleeding heavily. Next to him, there was a note from the local police station.

The family could instantly see that there was something seriously wrong with their dog and rushed Bruno to a veterinarian.

At the vet, they were told that Bruno had a 50/50 chance of survival and he needed emergency surgery.

The vets words sounded almost like a death sentence to the family since the surgery cost so much money. Money that they didn’t have.

But luckily, the family managed to raise enough money to carry out the operation that saved Bruno’s life. His legs, on the other hand, did not survive.

Owner Angie Laymon was so distresed about the whole situation that she took to her Facebook page to express herself. Here’s what she had to say.

“While our family was away from home there was a disturbance at a neighbor’s house which resulted in a call to Rogers County Sheriff.

The deputy who answered the call decided to come over to our house, but nobody was home.

The deputy encountered my German Shepard and disregarded the canine warning and continued to approach the house.

Upon reaching the house, he felt threatened and shot my dog. Then he taped a note to the door to inform me that he shot my dog — and he left my dog bleeding out on the porch.

The dog was 100 yards or better in the interior of my property doing his job.

Now it will take thousands of dollars for surgery to remove the bullet and save his life.

The deputy had multiple options at his disposal….get back in his car, use mace, get medical care for the injured animal that was suffering.

Tomorrow I will begin what I believe is going to be an uphill battle to get Rogers County to bear the cost of medical expenses for my dear Bruno, who was only protecting his own turf.”

This should not have happened! Please share if you also believe pets are like family members and deserve much better than this!