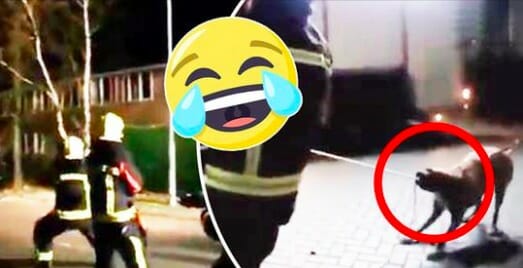 Oh, our sweet dogs just never fail to surprise, nor entertain us.

But here’s one particularly funny dog that engaged in the most adorable — and certainly most helpful — behavior I may have ever seen.

No wonder dogs have long earned the title as man’s best friend.

Firefighters were called on scene to help bring a tree down, but the struggle would be harder than expected. They attached a rope to the tree and got in line and pulled as hard as they could.

But the tree hardly budged.

Little did they know that help was already on the way…

A passerby walking their dog had approached the scene. And that’s when the dog suddenly and unhesitatingly sprang into action.

The owner tried to hold their dog back in order for it not to disturb the firefighters’ work, but to no avail. The dog was determined. It would help, even if it was the last thing it did!

The firefighters, naturally, enjoyed every moment and allowed the furry good samaritan to help — not without exchanging some laughs.

It grabbed hold of the rope and tugged as hard as it could, alongside the firefighters… resulting, needless to say, in a absolutely adorable and hilarious scene!

Watch the hilarious events unfold in the video below.

How sweet is this helpful dog? Share if this brought a smile to your face, too!