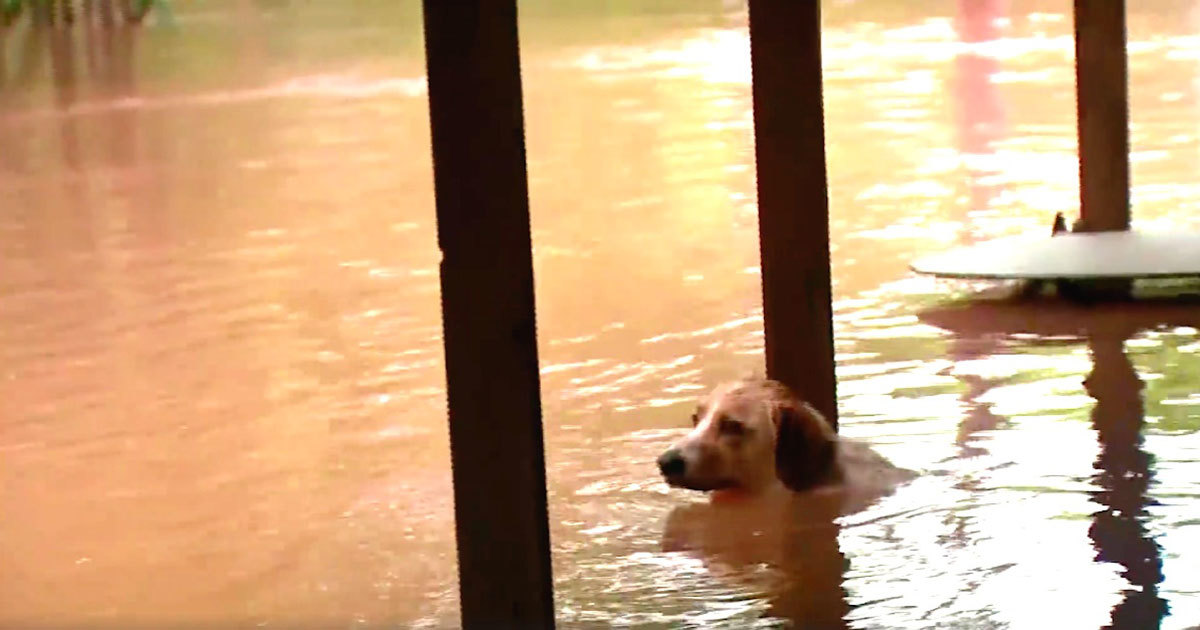 When the waters of the Brazon River in Texas rose to dangerously high levels, thousands of people were forced to evacuate their homes. And as they left, flood victims only had time to grab a few of their most prized possessions.

It goes without saying that most people would bring their animals with them as they fled to higher ground. But unfortunately, some people seem to lack empathy for even their own animals. And one victim of this cruel mindset was a little dog who was abandoned by her owners as they left the scene. But this pup’s owners didn’t just leave her behind. They left her chained up so she couldn’t even escape as the water rose higher and higher.

The underlying facts as to why the dog’s owners decided to abandon their poor dog are unclear, but what is clear is that she would’ve faced certain death as water started to swallow her house.

But just as the worst was about to happen, hope appeared in the form of a news crew. The team was documenting the flood from a boat when they saw the poor dog and knew they couldn’t just let her die there.

Without hesitation, two members of the team jumped out of the boat and waded toward the dog.

By that time, the water had risen to just below the dog’s nose, and they arrived at the last possible moment to save the lucky pup. Together the two crew members managed to unchain the dazed dog and get her to the safety in the boat.

The dog was soaking wet, shocked, and dazed by what she had just been through, so the team her to the Houston Humane Society so she could get the care she needed.

The veterinarian who took care of her stressed that the dog would’ve died had it not been for effort of the news team. And fittingly, the shelter staff named Archer after Phil Archer, a member of the team that saved her.

After receiving much love and care from the shelter, Archer was soon ready to be adopted.

And it didn’t take long for a loving family to step forward. Now Archer is enjoying life with her new family and no longer has to worry if she’ll be left behind again.

Thank goodness for the NBC12 team, the Houston Humane Society, and Archer’s new family. Share if you agree that pets are essential members of our families!