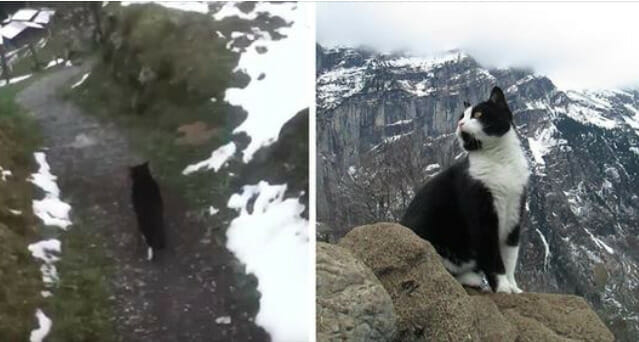 Getting lost in nature must be a simply terrifying experience. Imagine losing orientation and not knowing your way around — with no means of communication and not another soul in sight.

One man experienced just this while up hiking in mountains surrounding the little village of Gimmelwald, Switzerland.

But luckily, there was one guide in sight that would promptly bring him back to safety.

The reddit user first shared his remarkable story on the social media platform, where it naturally took off.

It all began when the man suddenly realized he was lost up in the mountains.

“I went up the mountain, couldn’t go back down without backtracking for an hour through knee deep snow, depending on the area. The usual trails that they showed on the map were closed,” he writes on YouTube.

“There was no one in the village to guide me along,” he adds.

But that’s when a little hero showed up.

“The cat started walking away and kept looking back to see if I followed, so I followed,” he says. “As soon as I got up, she started guiding me along some path. She seemed super friendly considering I was a total stranger, must be used to the tourist crowd that comes annually in that region.”

The hiker just kept following the cat — until it led him right back down the mountain.

“This was the only cat I saw… She wasn’t really randomly wandering the mountains, rather I think she lives in the town I was in,” he says.

When the hiker was back down to safety, he began filming his wonderful new friend, and guardian angel!

“We actually separated right at the end of that video. I had to get down, and she had a territory to protect!”

How sweet is this? Share this video with all of your friends who know just how clever cats can be!