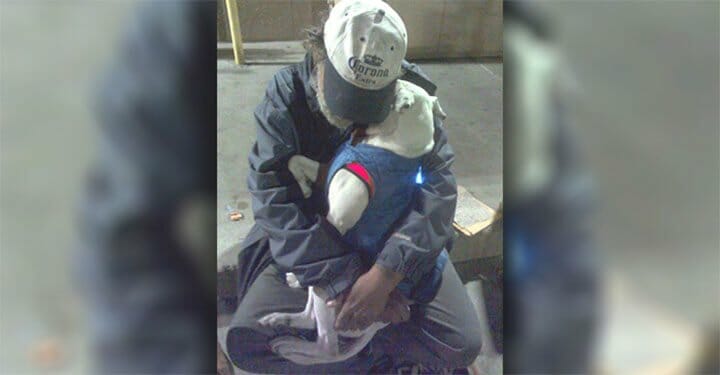 Most of us walk around each day without really taking in the world around us. That’s not a dig at society, rather an observation of how busy and focused people can be when it comes to going about their daily business.

Fortunately, Jenine-Lacette DShazer is a little more alert. One chilly day in Fresno, California, she took notice of a homeless man sitting on the sidewalk cradling a little white dog.

Realizing that he had to be cold, Jenine grabbed a blanket for the man and his pooch, whilst grabbing some food for them both and a roll of toilet paper from her car.

The man identified himself as 60-year-old Clifford James Herbert. His dog was named Baby, and he was guarding information that would push Jenine towards doing something she won’t forget for the rest of her life …

After receiving the gifts from Jenine, Clifford said he was “exceptionally grateful”. It was only when the pair got to talking, however, that Jenine was able to fully understand the magnitude of Clifford’s situation. He told her something that not only broke her heart, but set her on a journey that showed her true colors.

You see, Cliff, once a farm worker and owner of a mechanic’s shop, lost his job after becoming disabled from complications associated with heart surgery and a tracheotomy in 2006. He had recently found out he was dying of cancer, and his one wish was that someone adopt his dog, Baby.

Jenine knew she had to act, and so helped to get Cliff out of the cold and into a motel. Once that was done, she turned her attentions towards finding Baby a new home.

“She’s my whole world,” Cliff said during an interview with the Fresno Bee.

“She’s my best friend. She protects me.” And he protects her, too. It transpired that Cliff had rescued Baby from a man who had been beating her with a flashlight.

Sadly, Cliff knew he was fighting a cancer he couldn’t beat. It had spread to his brain, and his most desperate objective was to find Baby a suitable home before he passed. Incredibly, along with the help of Jenine, he was able to achieve his goal.

Baby was adopted by a woman named Stephanie Walker. Stephanie’s family has other dogs, so Baby will never be alone, affording Cliff the peace he deserved in his final weeks.

It’s terribly sad that Cliff couldn’t continue to care for Baby, but at least he could pass safe in the knowledge that his best friend will be cared for long after he is gone.

We’ll admit to shedding a tear when we heard about this story.

Share this story to pay tribute to the bravery shown by Cliff, and the compassion exhibited by Jenine!