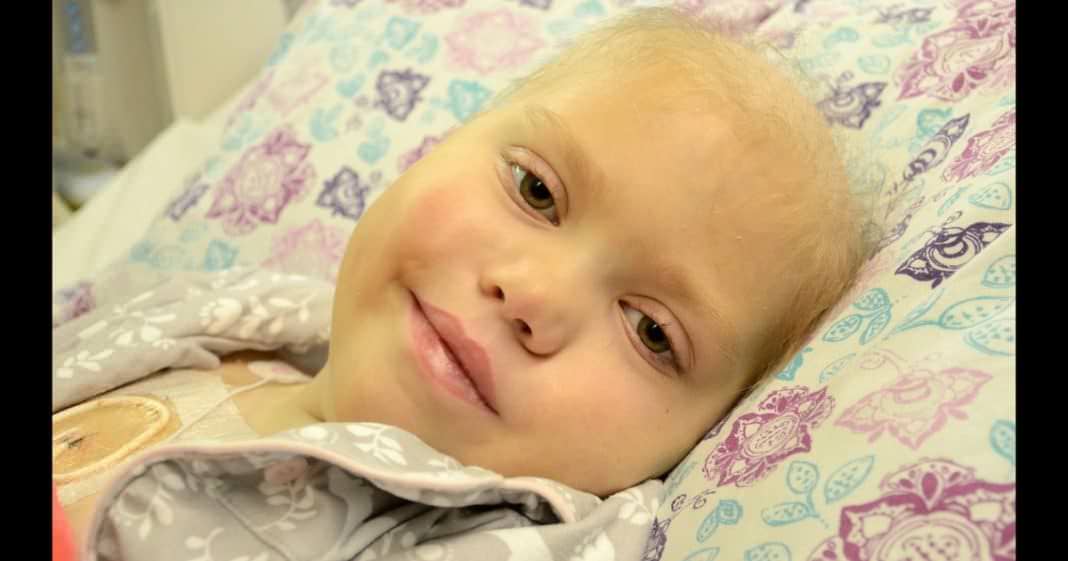 Most of her life, 11-year-old Abby Furco has known just one thing: cancer.

The adorbale little girl was diagnosed with leukemia in 2011, when she was only four years old.

At that time, doctors only gave her a 20 percent chance of surviving.

“We were devastated,” Abby’s mom Patty Furco told People. “We were basically told that she was was going to die, there was very little hope.”

Over the next six years, the family did everything they could to help Abby and give her the best life they could under the circumstances.

She underwent a bone marrow transplant, intensive chemotherapy and radiation therapy. She was also involved in pilot projects with various test medications.

“We kept her surrounded by love because we knew at any moment we could lose her,” Patty said in the same People article. “There were moments we didn’t know if she’d pull through, she has so many infections that could have ended her life. All we could do was watch her fight and try to get better.”

In October 2013 a ray of light and hope seemed to shine on the family. Abby had finished her treatments and during what was a “beautiful” year she could be just like any other kid and enjoy life. She went to school, to football practice and even joined the girl scouts.

But the following September, the cancer was back and this time it was worse than ever.

“As hard as that first diagnosis was, this one tested every ounce of our being,” Patty continues saying. “She became completely immobile, any movement hurt her and she hardly spoke.”

The little girl received another bone marrow transplant in February 2015 but only 15 days after, she was diagnosed with graft-versus disease, a condition where the donated bone marrow begins to attack the recipient’s own tissue and harms it.

Next month, Abby’s kidneys started giving up. She was under intensive care and the doctors told her parents that they needed to take their daughter on dialysis, otherwise she would be dead within 48 hours.

It was time to say goodbye.

“Doctors told us it was time to let her go, she was only awake for like an hour each day,” Patty continues. “We began preparing our other daughters for her death.”

Abby was placed at a an End Of Life Care department , her grandparents flew to the hospital say a final goodbye to their beloved grandchild.

The parents were forced to deal with the heartbreaking task of planning their daughter’s funeral. They chose the type of coffin, planned what music would be played and contacted the priest.

But then a miracle happened — Abby woke up.

“We couldn’t believe it, in a matter of days, weeks, months she started walking and getting stronger,”  Patty says. “It’s an absolute miracle.”

Doctors agree —there is absolutely nothing medical that can explain Abby recovery.

“We helped her get home on hospice,” Jacob Wessler, Abby’s doctor, said. “But when we started backing off, taking away treatments so she wasn’t on so many meds, she started getting better all on her own.”

“She’s had ups and downs, but if she continues on this path, she is going to make us all look like fools!” the doctor continued to say. “She’s defied every single odd.”

Every day is a new day

Abby is now in remission and receives medicine twice a day. Her future and prognosis is still uncertain but her family is hopeful.

They take every day as it comes and enjoy every precious moment they get to spend with their little girl!

“We watched her die and come back to life,” Patty said. “Now we’re looking to the future.”

Cancer is a horrific disease and especially when it affects children but Abby’s story shows that there is light in all the darkness.

The support she has received from strangers, family, friends and classmates is incredible — it has helped this little girl through things no child should be forced to go through.

In June 2017, Abby removed her Hickman cathedrals, an inoperative intravenous catheter system that continuously brings in in-carcinogens and for people who often need dialysis. A major progress!

Nobody thought Abby would survive when she was diagnosed with leukemia in 2011 but despite all the trials, the brave and tough girl has shown that she is not going to give up.

In September 2017, this tough cookie turned 11!  This was celebrated with her best friends and family by having a great cupcake party!

Abby’s story brought me to tears, it’s been a while since I’ve read about such an inspiring and heartwarming little girl.

Now I’m holding my fingers crossed that this lovely and brave girl can continue to live her life — far away from cancer medication, hospital tubes and dialysis!