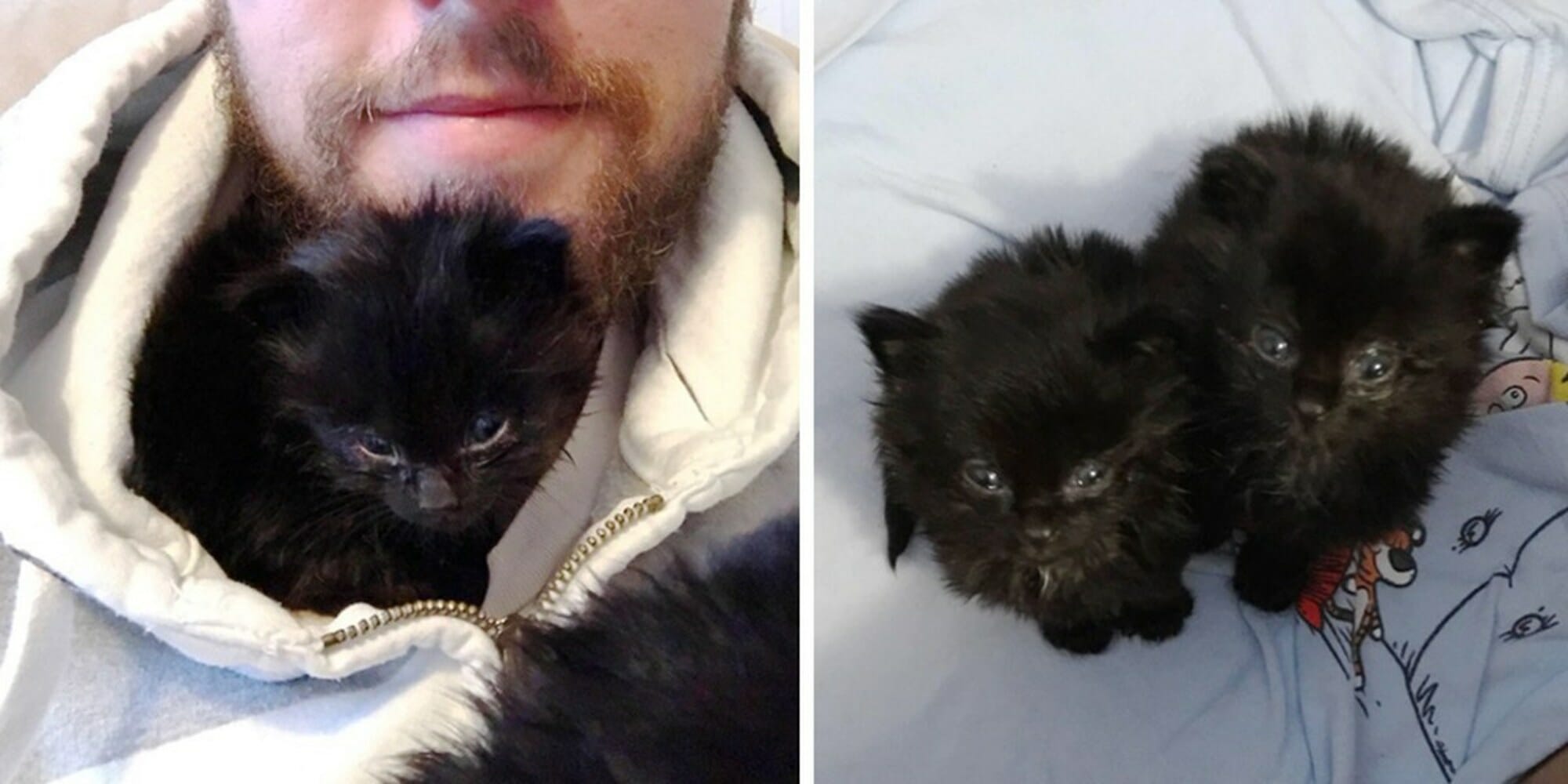 It was on a cold night, one year ago, that a man heard something that sounded eerily similar to the chirping of a small bird coming from underneath his house.

He waited for the next day to investigate, having told his roommate of what he had heard.

In the light of day, however, the two of them would find something that would not only affect their lives, but also take them on a journey that has since made headlines on social media …

It was a crisp November afternoon in North Carolina when the man in question returned home from work and heard the chirping noise again.

Reddit user RedArremerAce recalls, via LoveMeow: “With daylight on my side, I was determined to get to the bottom of it. My roommate beat me to the crawl space access and let out a loud ‘Aww!’. She turned her head and said, ‘It’s a kitten!'”

“I felt guilty, wishing I had tried harder to investigate the night before. I hurried over to the crawl space and had a look inside with my iPhone’s flashlight. There, in the dirt, was a precious little black ball of fluff. Eyes still closed, sniffing the air and crying — quite loudly at this point.”

His roommate grabbed a flashlight and wriggled under the house. A few minutes later, she returned clutching a tiny ball of fur.

“She brought me the little critter and I cradled it in my arms, overwhelmed at how cute it was, wondering what its odds of survival would be, etc. Then we heard more ‘chirps’ coming from the other side of the crawl space.”

There was more, though. A second foray produced a second kitten, so they brought them both inside to get them warm.

“By this point I was searching the web to see how others had handled these situations in the past. I found everything from exhaustive ‘how-to’ guides to forum discussions that led me to believe their mother may be off hunting for food for herself, and that they would have a better chance of survival if we let her handle them on her own.

“We discussed it and decided that if there was a mother she must not have been around for a while considering how hungry and filthy they were.”

After returning from the store with supplies and a milk replacer, the pair set to trying to feet the cats.

“Once we got home we warmed up the milk, cut the nipples on the bottles, and each of us fed one of the little angels. They were finally quiet, finally satiated.

“They slept for hours, looking so precious and content. You could barely tell where one kitten stopped and the other started, they were cuddling and keeping each other warm.”

“I had recently been laid off from work and had lots of free time on my hands. Those little babies took me from aimless and borderline depressed to busy and fulfilled. Caring for them and watching them grow was and is one of the most satisfying experiences I’ve had in my life.

“Every few hours we were feeding, burping, and cleaning the little babies. They both started to grow bigger and stronger. Their eyes opened and they started to develop some personality.”

“Soon they would no longer go right to sleep after eating anymore. They loved to play, with toys and with each other.”

The kittens were named Inky and Sue, and now, one year later, they’re all grown up …

“I can’t believe how big they are! They’ve both had their shots, they’ve both been fixed, and they are, without a doubt, the sweetest, most mild mannered animals I’ve ever seen.

“People have told me they were very lucky I found them and that there’s no telling what would have happened if I hadn’t.

“I think that’s true. I also think I was just as ‘lucky’ (blessed) to find them.

“As cheesy as it may sound coming from a 31-year-old man, they came into my life right on time and they have enriched my daily experience beyond measure.

“Cats (and animals in general) will repay every ounce of love you give to them, and then some.”

Awww shucks, this story brought tears to my eyes! Thank you so much for rescuing and raising these two adorable cats.

If you liked this story, share the article on Facebook so your family and friends can read it to.