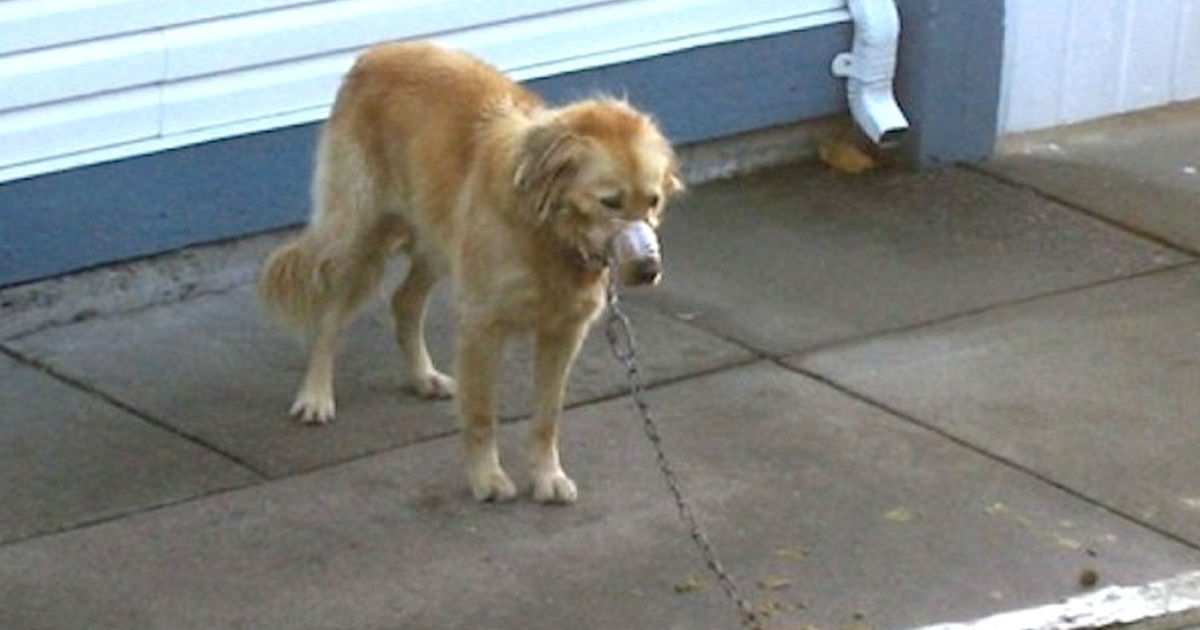 This is the story of second chances and the power of love. And it’s proof that it’s never too late for either of them.

The dog in this story got a rough start to life. His owners resented him and banished him to a life outdoors. He was chained up and muzzled. He was without the love and companionship he yearned. And the only time his owners paid him any attention was to abuse him.

When neighbors complained to local animal control services, the town authorities did nothing. So the neighbors did the only thing they could: they took matters into their own hands and rescued the helpless dog. And thanks to the amazing work of a few good Samaritans, the dog was adopted by loving family and given a brand new life…

His only crime was being a dog. That was apparently enough for his owners to treat him in a way that no animal should ever be treated.

They muzzled him with duct tape and chained him up outside their house.

So what did he do exactly? Scratch at the door. And why? He just wanted to be close to his family so he could give them all of the love that a dog has to give.

But instead, his owners banished him to live a life alone on their concrete patio. The months and years of abuse and neglect took their toll and the dog lost his spirit to live.

He barked hysterically and rushed at people if they came near—both clear signs that he had been beaten. If he had been sent to a pound, he probably would’ve been deemed unadoptable and put him down.

Then, when neighbors notified the local SPCA about the situation, nothing happened.

Years passed and the puppy became a dispirited grown-up dog.

Finally, some neighbors couldn’t bear seeing this dog abused and neglected any longer. They decided to rescue him, and under the cover of night, they freed the poor dog from his backyard prison.

And just like that, the dog was saved! He was given a name—Alfie—and a loving home, where he could finally live the life that every dog deserves to life.

For once in his life, Alfie could run, play, get belly rubs, and feel love.

Alfie’s muzzle and chains were gone…

And replaced with the joy of freedom.

But Alfie’s trust of humans didn’t come over night, though.

The damage done by years of abuse could only be overcome by the love and car of his devoted family.

They never stopped working on building him back up— at home, on walks, and in training classes.

Alfie continued to improve and blossom until the very end. And thanks to his very special family, Alfie was able to live out his long life as happy as a dog can be!

I’m so glad Alfie was given a second chance at life and was able to share so many happy years with his family.

Please share this moving story of second chances with all of the animal lovers in your life!