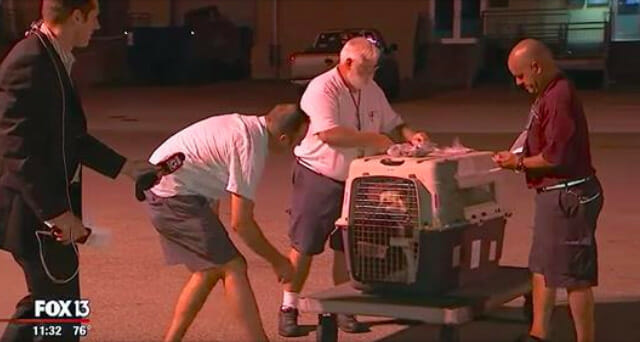 We may bond more intensely with others when experiencing difficult times. This applies to the bond between humans and animals, too.

Nick was posted in Iraq during which time he faced perils and challenges more difficult than we can imagine.

He saved numerous lives while working tirelessly flying wounded soldiers back to safety. But just as his emotional job was about to take a toll on his morale, he encountered a friend that would change everything.

The friend came in the shape of a young stray dog — Airys. One day, the adorable pup just ran up to Nick and the two quickly became friends.

Airys was welcomed like family into the army base. The feral dog was in dire shape and the soldiers immediately took her under their wing, feeding and caring for her as war raged in Iraq.

Airys was loved by all, but Nick was particularly fond of the sweet pup, whom became a real morale booster at the base. The soldiers soon built Airys her very own kennel in their hangar, and Nick and Airys became inseparable.

Sadly, the day came that Nick was scheduled to return to Florida. But the soldier couldn’t fathom the idea of leaving Airys behind — he just knew he had to bring her back with him.

So Nick contacted SPCA International, and with their help, he managed to make it happen.

Several months later, it was finally time. Thankfully, Nick and Airy’s emotional reunion was filmed for a local news broadcast. Viewers watched as the nervous soldier welcomed Airys to her new home.

“I’m excited for her reactions of seeing nothing but desert to having a yard of grass and trees, being able to run after squirrels,” Nick told Fox 13 News.

At first, Nick was very nervous that that Airys might not remember him — but my, was he wrong!

What an absolutely beautiful reunion! My heart completely melted. Share this wonderful story if yours did, too!