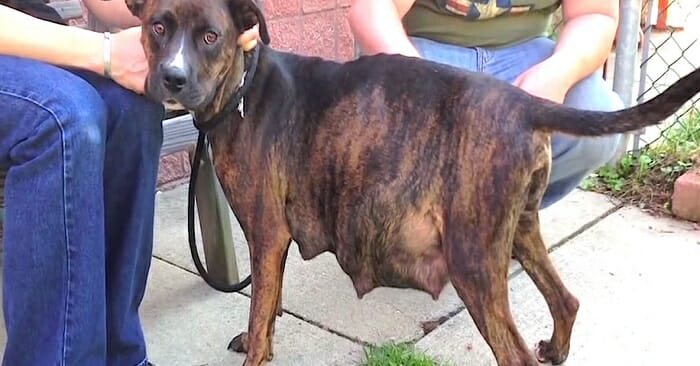 Chris and Mariesa live a rather crazy life. It’s no small wonder really, given that they share their home with a host of adopted dogs.

One day, they went to the animal shelter with the idea of taking another dog who had been abandoned, injured or otherwise neglected.

On that occasion, they met pregnant pitbull Storie. The couple quickly fell in love with the dog and agreed to adopt her. Little did they know that she had 12 puppies inside her belly…

Although Storie’s stomach was swollen and it looked as though she could give birth any day, something was preventing her. It just wasn’t happening at the shelter.

Chris explains: “Dogs having puppies at shelters, it’s not the best thing for them. It’s stressful for her, stressful for the puppies.”

Chris and Mariesa decided to take care of Storie and give her a safe place in their home where she could birth, feed and raise her puppies safely.

The initial idea had been that Storie would give birth at the shelter, but it seemed to be that being there was preventing her. She didn’t feel safe.

Chris and Mariesa arranged a comfortable bed at home and took care of Storie.

They thought it would take the dog time to acclimatise to her new surroundings at home. But that night something incredible happened.

Just a few hours after Storie had left the shelter, she went into labour. All 12 of her puppies had been welcomed into the world a mere 18 hours after she had arrived at Chris and Mariesa’s home.

It turned out a loving environment was all Storie needed.

Within two weeks, the puppies began to open their eyes and show the world their unique personalities. The idea of having 13 dogs roaming around the house would be daunting to many, but Chris and Mariesa managed to get by.

After a few months, the organisation Pubbles and More Animal Rescue helped to find new homes for all 12 of Storie’s pups.

And as for Storie … well, you’ll have to watch the video below to see what happened to the amazing pitbull.