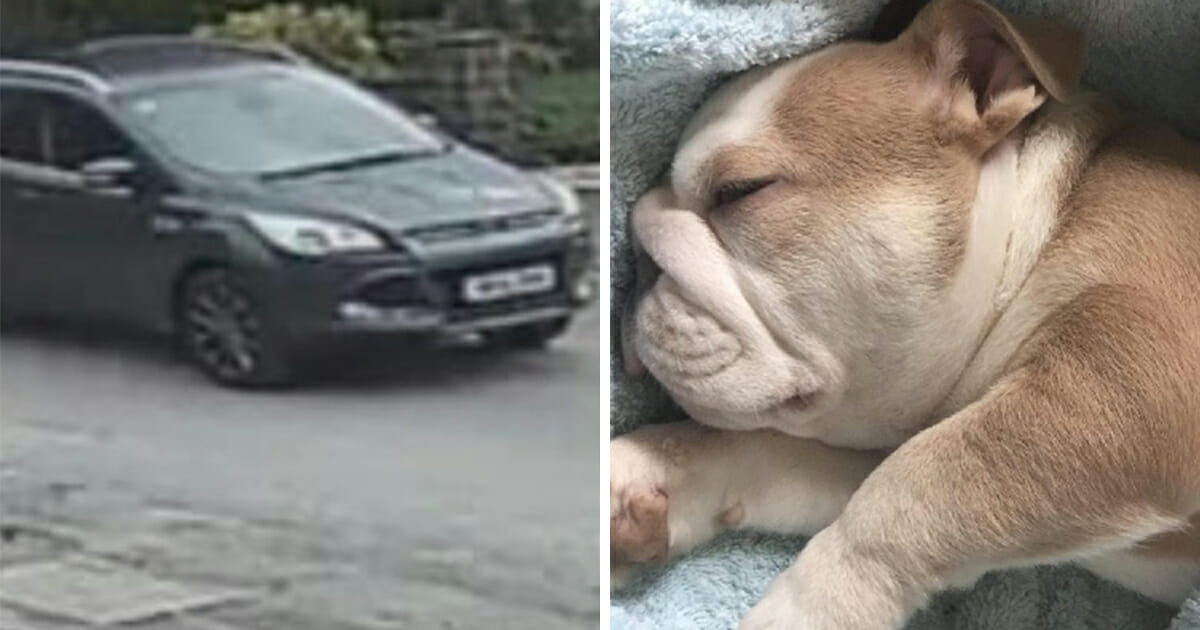 I will never, ever understand how someone could harm such much as a hair on an innocent animal that wants only to love.

Sadly, we live in a world where callousness and cruelty are prevalent, and so often the victims are those who can’t protect themselves.

A heartbroken family is now appealing for help after their puppy was stolen in a burglary and later found dead tied to a gatepost outside their house. They’re aiming to identify the owners of a car they think may be linked to the crime, in the hope that the culprits can be brought to justice.

Gemma Knowles has launched an impassioned appeal to help find the thugs who stole her puppy Wilma and drove off, only to return later and leave the dog to die outside their property.

Her partner Andrew Bolland was able to get CCTV footage from neighbours that shows a black Ford Kuga on their street at 2:10pm on March 19. The car is then seen racing down the road at 2:20pm on the same day.

It was followed by the family’s Mercedes 4×4 ML – which was stolen during the robbery – along with Wilma, a French bulldog puppy.

As per the Lancashire Telegraph, Andrew said: “They must have been in our house for six or seven minutes and the amount of people who have been talking to us about how sad it is about our dog is amazing.

“We are going to find out who they are and people have been talking about people who have had a similar things happen with break-ins.

“It shows one car going up our road and six or seven minutes later it comes speeding back down the road with our car following it. We have given the footage to the police.”

Speaking on the death of their dog, he added: “We got up at around 7am and my partner Gemma was getting picked up at 7.40am to go to work.

“Gemma ran out and she saw Wilma tied up to our front gate with metal wire.

“We tried to revive her after she was pulled down. She was cold and my partner’s dad who has dogs reckons she had been there since about 5am or 6am.

“We did not hear anything when we woke up or even at night.

“She must have been tied up there. We don’t know if she was too high off the ground and she had been hanging or the metal wire was too tight and she could not get free.”

Meanwhile, Gemma isn’t prepared to give up until they find the people responsible.

Gemma added: “We will not stop until we find out who did this to our dog.

“This sort of thing will happen again if they are not caught.”

Want my little Wilma home plz if anyone knows anything or has seen her do the right thing and let me know or bring her back my whole family are devastated and she will be so scared ??

A police spokesperson confirmed that as yet no arrests have been made. With authorities still investigating the crime, it’s important that we share this far and wide in the hope that the culprits of this heinous crime are apprehended.

Rest in peace Wilma! You can help the family by sharing this article on Facebook. Even if you live nowhere near the area, every share helps. Connections are usually made in the strangest of places.