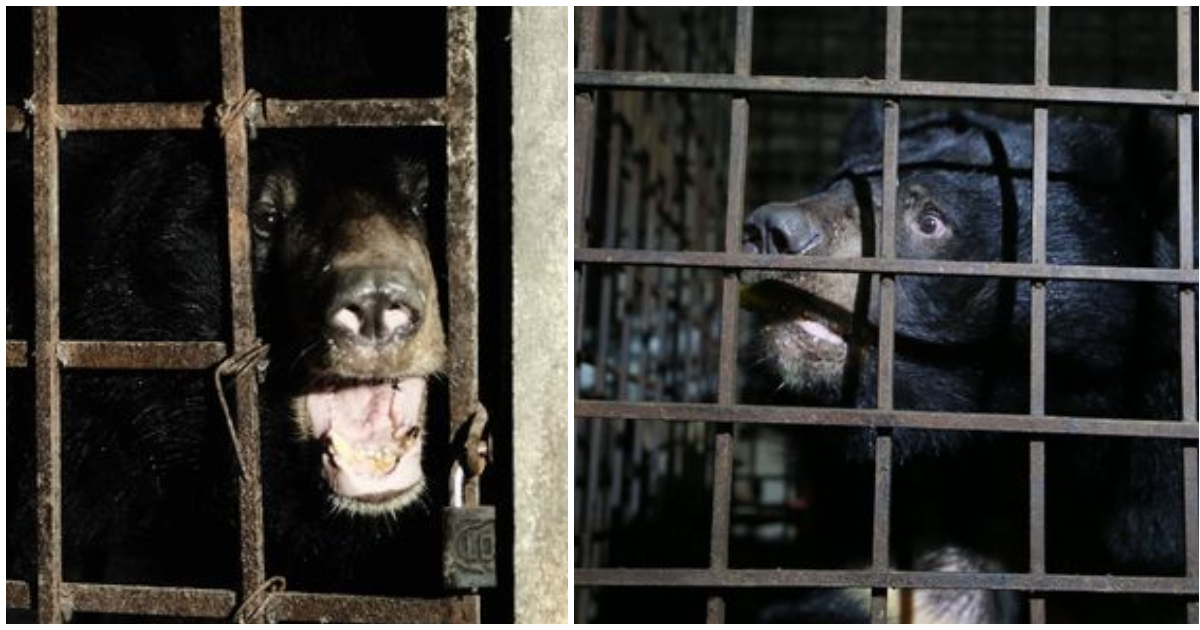 FOUR PAWS International has been behind some of the biggest animal rescue stories lately, saving animals in need from lives of shocking neglect and abuse. They were behind the relocation of Kaavan “the world’s loneliest elephant,” shut down an infamous Pakistani zoo above a mall and just this month freed 16 dogs from a slaughterhouse.

And now, the group has scored another victory for animals, shutting down a shocking operation and freeing two bears from a life of misery.

In Vietnam, Asiatic bears have been kept in cages and farmed for their bile, which is sold on the black market to be used in traditional medicines.

While sale of bear bile has been banned in the country since 2005, FOUR PAWS estimates that there are still 385 bears being kept in 124 farms.

These bears spend their lives in miserable conditions. Not only are they kept in small cages, never seeing fresh air or the light of day, but the bile extraction process takes a painful toll as well.

The bile is extracted from their gallbladders with a needle puncture, and the bears are often improperly anesthetized. This also leads to complications like chronic liver and gallbladder disease.

The bears are so bored and so eager to escape that they spend their days chewing on the steel bars. “The cages are extremely tiny, scarcely larger than the bears themselves and completely devoid of stimuli. The bears lack everything,” said Magdalena Scherk-Trettin, FOUR PAWS Project Coordinator for Bear Rescues.

“They are ill and lifeless. I have seen animals that could not even lie down properly in their cage.”

But now, two of these “bile bears” have finally tasted freedom, thanks to a rescue operation by FOUR PAWS.

The group discovered that two Asiatic black bears, Xuan and Mo, were being kept for their bile in the basement of a clothing shop in Son La Province, Vietnam. The conditions were particularly grim.

“Kept in a windowless and wet basement since they were cubs, bears Xuan and Mo have suffered unimaginably,” FOUR PAWS wrote. “For years these bears have known nothing but pain and abuse… These keeping conditions are one of the worst we’ve ever seen.”

But this week, FOUR PAWS launched a rescue mission, saving Xuan and Mo from the basement and bringing them to freedom.

Amazingly, the rescue operation went smoothly. Despite being bears who have been so badly mistreated, Xuan and Mo were calm around their rescuers, perhaps knowing that they were there to help.

But it was also clear they had suffered a lot from their time in the bile farm. After getting them out of the basement, they took the bears for a much-needed vet check-up.

“The vet checks on-site revealed gallbladder disease due to multiple unsanitary and traumatic bile extraction processes carried out on the farm,” FOUR PAWS wrote on Facebook.

“In addition, Xuan is overweight, has a liver disease and his teeth are in terrible condition. Three of his fractured canine teeth will need to be removed in the coming months.”

The good news is that these bears have a new home, far from the cramped cages and abuse they’ve always known.

Now, they will be kept at FOUR PAWS’ Bear Sanctuary Ninh Binh, a special sanctuary in Vietnam created as a haven for these bile bears.

While they still have a long road to recovery ahead, these bears are finally getting the love and care they deserve.

We’re so glad these bears are finally safe! Thank you to these rescuers for saving them!