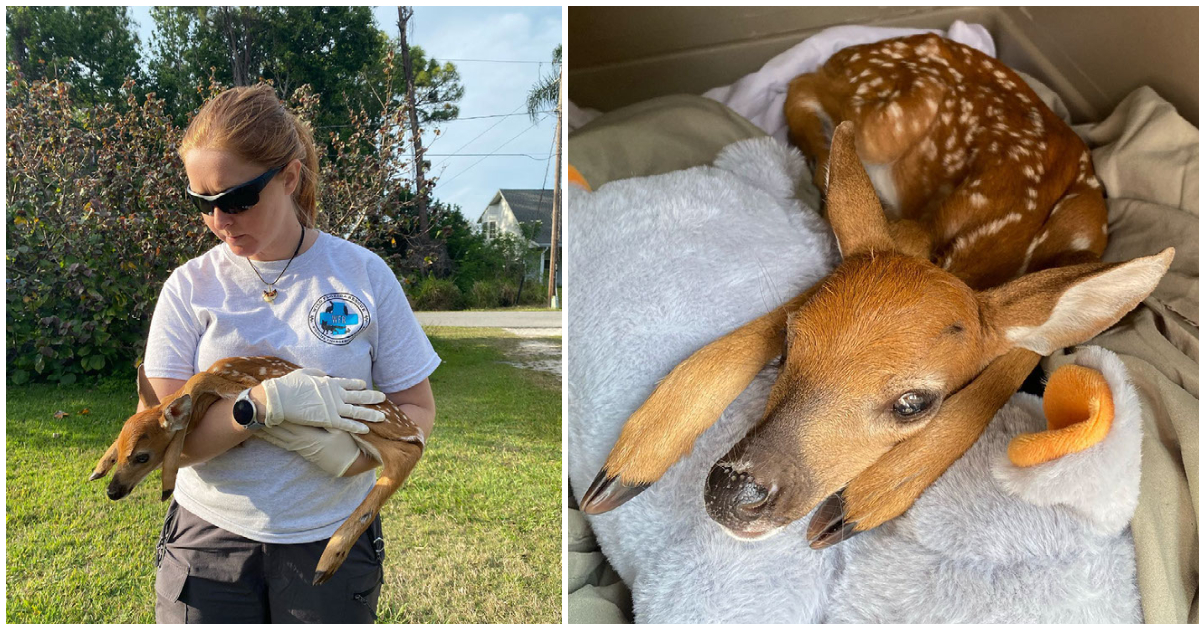 Deer are a part of many people’s lives. They’re a wild animal we often see on roads or in our own backyards, and it’s usually best to just let them be.

But sometimes, deer need our help. Sometimes they get trapped or injured, and need some kind humans to intervene.

Like one baby fawn, who had just lost his mother when rescuers came along to help.

On March 29, a person driving on State Road 46 in Mims, Florida spotted a deer on the ground with a young fawn by her side.

The driver realized the heartbreaking situation: the mother deer had been killed after being hit by a car, and her fawn was refusing to leave her side.

The driver pulled over to help the now-orphaned deer, and contacted Wild Florida Rescue for assistance.

Rescue team captain Crystene Prokop says the driver did the right thing by helping the fawn, as young deer are trained to stay by their mothers’ side.

“He probably would have been hit by a car or starved to death,” Crystene told ClickOrlando.

They searched the scene for any other deer and realized he was an only child, Wild Florida Rescue explained on Facebook. The fawn was taken to Creature Safe Place, a wildlife rehabilitation center, where he is now recovering with a surrogate mother, with the hopes that he will be able to return to the wild soon.

“We are very excited (for him). That’s why we do what we do,” Crystene said.

While things worked out for this fawn in the end, it’s easy to think of how things could’ve gone differently. Deer are often at risk of being hit by cars, making situations like this common.

Crystene reminded people to watch out in deer-populated areas: “Just watching when you’re driving, obviously pay attention, try to slow down and not hit animals,” she told ClickOrlando.

But she also told people not to immediately assume a fawn is orphaned if there’s no mother in sight, as “mothers often leave their young out in the open during the day,” she explained.

So how can you tell if an fawn needs help? Look at its ears. “If you see a fawn that’s ears are curled, there is a good chance it’s orphaned,” Crystene said. “Ear curling is a sign of dehydration.”

It’s a sad story, but we’re glad that this fawn is okay and on the path to a new life. Thank you to the rescuers who saved him!