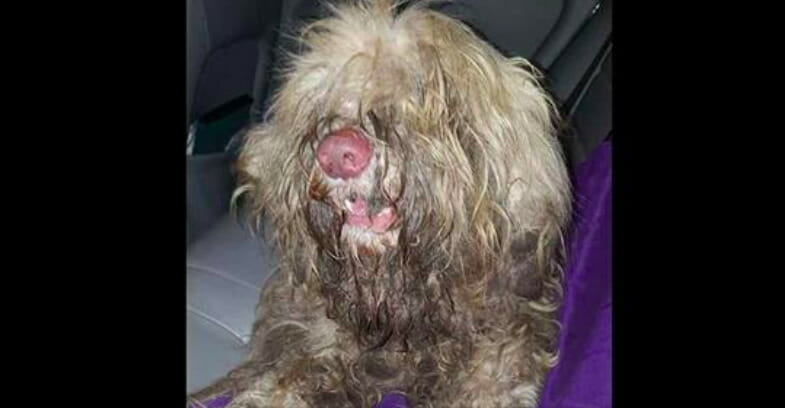 Little upsets me more than seeing or hearing of innocent people getting hurt.

Sadly, it’s often animals that end up in such situations simply because they are unable to protect themselves or their fundamental rights to be treated with compassion.

Pictures don't even come close to showing how bad these mats were. They were soaking wet, infested with fleas, full of yeast infection and attached like a mummified cast. The smell was horrendous.

This was the state that 4-year-old Lucky was discovered in after being discovered on a highway one night in Florida, USA.

A driver spotted Lucky one night along a highway. He immediately pulled over and went over to the dog to rescue him.

Poor little Lucky was clearly severely neglected — his fur was heavily matted, and, as can be seen in the photos, he had problems to even see through it all.

Lucky was indeed in dire condition, his heavily matted fur even preventing him from being able to move properly.

It’s unknown how poor Lucky ended up on the streets, but what’s certain is that on this night, everything would change for the sweet pup.

The very same night of Lucky’s discovery, a woman named Mary Dixon posted a photo of him on a local Facebook group page, asking for help. She soon got an overwhelming response from dog ​​lovers. One was Kari Falla, who happened to own a pet grooming salon.

To Mary’s great delight, Kari offered to open her salon for Lucky, right then and there, in the middle of the night.

Kari worked carefully on Lucky for several hours, patiently removing months of heavy, wild fur. According to Kari, it normally takes an hour and a half to groom a dog, but in Lucky’s case it took double that time.

It’s not entirely clear what happens to Lucky afterwards, but we can only guess that with such kind individuals around him, he came to find a loving forever home.

What’s for certain is that Lucky’s transformation was magical: just have a look for yourself in the video below:

THANK YOU all the animal lovers who make a difference for our beloved dogs, cats and all other animals out there. SHARE to pay tribute to Kari and the animal heroes who helped Lucky in the middle of the night!